Monday, Feb 10, 2003 by Rich "Lowtax" Kyanka (@TwitterHasBannedAllMyAccountsEver)
Know of an awful site? Send it to us and become a hero!

FREEDOM ISN'T FREE!, submitted by Orha. I used to be a pretty stupid guy. I'd wake up every morning, blissfully ignorant of the fact that freedom isn't, in fact, free. I was a miserable, pathetic fool until I stumbled upon this wonderful website, a testament to the human spirit and "can do" attitude that makes America whatever the hell it is today. The "FREEDOM ISN'T FREE!" website (I don't know what else to refer to it as), tackles the tough topics such as governmental mind control and, well, I really have no damn clue. Basically the author of this classy website really doesn't care too much for the government, claims they're performing some kind of large-scale scientific experiment on our brains, and attempts to expose the truth with gigantic colorful fonts, nonsensical sentences, and horrible images which might make sense to an alien race somewhere. Anti-aliasing is for traitors!

PSYCHOTRONIC WEAPONS CAN TORTURE YOU THROUGH THE WALLS OF YOUR HOME! YOUR ABILITY TO THINK INDEPENDENTLY CAN NOW BE SNUFFED OUT WITH THE PUSH OF A BUTTON. MOST OF YOU ARE MOMENTARILY FREE, BUT YOUR FREEDOM EXISTS ONLY AS LONG AS YOU ARE NOT TARGETTED BY THE WEAPONS DESCRIBED ON THIS SITE. Your ELECTED REPRESENTATIVES can be CONTROLLED with the technology described on this site, and they may not even be aware of this control.

TO DATE, NO GOVERNMENT AGENCY HAS ADMITTED TO BEING CHARGED WITH INDEPENDENT CIVILIAN OVERSIGHT OF MILITARY AND INTELLIGENCE CLASSIFIED HUMAN EXPERIMENTATION. PROTECTION OF SUBJECTS OF MILITARY/INTELLIGENCE CLASSIFIED RESEARCH SIMPLY DOES NOT EXIST. U.S. PROPOSED LAW ADMITS MIND WEAPON TECHNOLOGY IS A CONCERN THEN, AS WITH ALL REFERENCES TO MIND CONTROL, IS SUDDENTLY GUTTED WITH NO MENTION OF MIND CONTROL, OR EVEN 'EXOTIC WEAPONS' 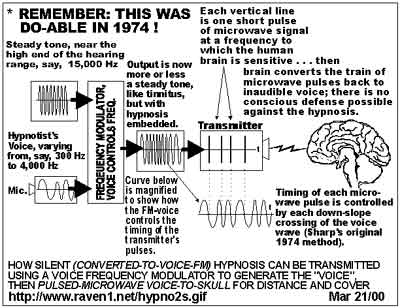 1. Your SUBconscious can hear words spoken at frequencies above the top of the normal speech frequency range. ("Tinnitus" in some, nothing heard in others.)
2. Put a hypnotist (or hypnotic recording) at the mike of a device which converts the voice into the high-end but barely audible frequency range.
3. Transmit via pulsed radio signals to target, or directly via normal radio/TV audio, or through the air.
4. Target is unable to resist the hypnosis because target is unable to consciously hear the repeated suggestions/commands.

READER, PLEASE REMEMBER THE VICTIMS, LIVING AND DEAD, OF SILENT, BRUTAL, AND ILLEGAL ELECTRONIC, CHEMICAL AND DRUG, MIND ALTERING AND CONTROLLING WEAPONS TESTING, OFTEN IN THEIR HOMES. FOR MANY THIS INVOLUNTARY TESTING CONTINUES TO THIS VERY DAY AND HOUR

Oh no! According to the diagram, we should all remember that "this was do-able in 1974!" Which means that now, with all our advanced technology in 2003, people could possibly make even shittier and uglier diagrams than the one above, which was apparently produced in 1974! What a horrible notion! I'm going to file a complaint with my government official right now. Okay, give me a second to think about it so they can read my thought patterns and file a mental complaint... DONE! Thank you very much for the psychotronic complaint filing, gents!