Psychops.com, submitted by R-Lo. Psychops.com is the last in our unintentional week-long tribute to the conspiracy theorists and insane ranters of the Internet. Run by a gentleman named Kurt Billing who proclaims himself as an expert in all of the nasty things the government, aliens, and fuck knows whoever else are secretly doing to us to subvert our freedoms. He offers up the same sort of retarded evidence of conspiracies like showing photos of jet exhaust in the sky and claiming the government is spraying us with the fabled "chemtrails". Holy shit, how shocking, stuff comes out of planes including GOVERNMENT PLANES! Oh my fucking lord they are out to get us!

Unless you've been living in a cave other than the one where these conspiracy theorists live you may have heard that a lot of people think the aliens and the government are implanting shit into our bodies. Well Kurt has scoured the Internet for pictures of microchips and what are probably dog tracking devices and presents them as proof that the government/aliens/Mexicans are once again, subverting our freedom. Naturally no mention is made of the Patriot Act or the Patriot Act II on Psychops, but apparently blatantly subverting freedoms just isn't cool enough for Kurt to bother with. 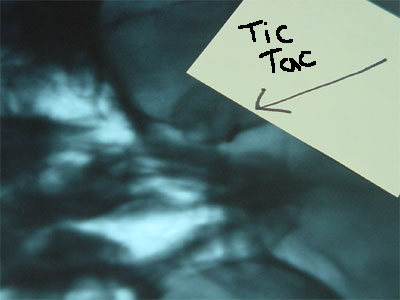 The above images are x-rays of a lithium based microchip that was implanted in a lady's head some 20 years ago by our government. I met this lady and her doctor at a conference at which I was speaking. Her doctor later mailed me these x-rays to post on my web site. Although this lady was aware her chip implantation was part of a government project, many people speak of chips being implanted by aliens. Whether these alien chip implantations are part of another government project or are actually implanted by aliens is a whole discussion in itself. What is indisputable is that people have been microchiped and biochiped against their will.

It should be noted that the government/alien/moon-baby implanted microchip resembles a tic-tac placed on top of an X-ray. Not only that, of the four photos on the site this was the only one that was actually correctly linked to a larger image. Conspiracy? You be the judge! 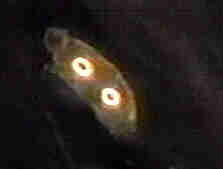 PSYCHOPS.COM, YOUR SOURCE FOR DOCUMENTED PROOF OF Mind Control, Biochip & Microchip Implants, MKULTRA, Chemtrails and Government Experiments on the General Public without their Knowledge!

This image was taken from Kurt's "chemtrail samples" section. Apparently it is irrefutable proof that chemtrails contain small things! In other pictures you can see what appears to be the bottom of a sneaker and part of a microphone, zoomed in until it's almost recognizable. That's assuming of course that these pictures were taken with ill-intent and weren't just pulled randomly from Google Image Search with ill-intent.

Way to go Kurt! The depth with which you document your sources and explain your concepts really blows the motherfucking lid off this conspiracy.