Saturday, Feb 15, 2003 by Reid "Frolixo" Paskiewicz
Know of an awful site? Send it to us and become a hero!

Paul Schroeder Story, submitted by Nate the Server Lackey. Wrapping up this week's Insane Psychopathic Mind Control theme comes "Paul Schroeder Story," a site which tells, well, Paul Schroeder's story. This story is not particularly comprehensible or written in a language that human beings were equipped to understand, but it is very interesting in the same sense that watching your own brain explode would be "interesting." 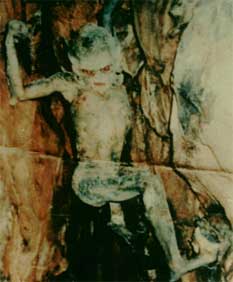 Paul; God bless you for the chance to ventilate and exchange ideas in this horrid realm; horrid, because that attacks continue and vary in intensity to the point where I have tacitly accepted all I've told you at the risk of denying everything about the mind and dreams I've ever learned description of haunting at night a large black shapeless mass turns out the lights while you are in the labyrinth of mazes hallways en route to storage rooms, in the back, and stands in your way laughing, evilly, there is a terror and a strong wave of hatred felt. Trying to retrace your way in the darkness, back towards the elevator, hugging the walls, brings air blown onto the back of your neck, your name whispered in your ear and your clothing clutched and plucked at by unseen hands. The presence is large and blacker than the darkness surrounding it; you feel a sense of being watched and sense waves of intense hatred which is undeniable. Flashlights fail and dim and blink out when one tries to outsmart its turning the lights out. The six floor apartment building abuts the Fort Hamilton Army Base, a quarter mile away and is at the virtual foot of the Brooklyn side of the Verrazzano Bridge. I have been the superintendent of that building between 1990 and 1999 and have encountered that entity through my denial to acceptance to raw fear of it. It has intruded into my dreams; followed me into the elevator and into my bedroom to evoke horrid worst scenario nightmares which betray that it knows our minds better that we do; I avoided the basement, neglected my duties there and was subsequently fired by the management office. This building stands at the intersection of 92 Street and Fort Hamilton Pkwy, in Brooklyn, New York. The psychic attacks continue, nonetheless; I am drowsing over the bathroom sink; half asleep and yawning, supporting myself with my arms on both sides of the sink, tired, still half asleep naked, when something brushes my face and loins, both just below the sink and just above my face, above the sink. I open my bleary eyes and see an enormous conglomeration of festooned fishhooks surrounding me, hanging from the ceiling across the sink; a filigree chandelier of razor sharp connected fishhooks that I've stumbled onto, stark naked, now, with pinching sharp connections at my groin and lip and face that apprise me, quickly panicking now, that I've been deeply hooked in myriad places; into my genitals, pulling through my lip and my cheek and that to move backwards, in shock or panic flight is to deeply gaff myself further, inextricably and beyond help. I am attached painfully and as I lift my right arm to gently work out the fishhook, razor thin, dozens of others fasten against and bite into my flesh scaring me further into desperation and deepening my angst as I awaken, quickly now, to a gathering sense of panic and helplessness and the hook in my cheek tears deeply into my mouth and the fishhooks, unseen, beneath the sink begin to bite deeper and more painfully into me, I am a marionette impaled from face to scrotum and have wandered unknowing into this macramé of razorblade like fishhooks some madman must have concocted over my sink in my bathroom. The slightest movement brings sharp painful reminders that I an stuck fast and in a nightmarish predicament I cannot solve as I am screaming, muted for help from my wife asleep in the other room. Opening my mouth to holler I feel the deeper bite of the hook into the deep muscles of my face and I can only growl and moan loudly, aware I wont likely be able to reach her ears with my low moaning and an becoming more entrapped with every movement. Like a monstrous wind chime of dangling fishhooks, I am trapped and my fear level climbs to near hysteria as I awaken, suddenly, in bed. Again I am aware of the imposed horror for ethereal feasting but dazzled at the raw power of the attack; the totality of sensory construction and the viciousness inherent in the scenario. I am beset with demons; negative thought entities who are malevolent and who know our minds much better than we do in projecting telepathic sustained attack. How can you fight something you cant see? This was the first of several creative virtual reality psychic attacks delivered, on this night and represent a continued program of spiritual and out of body attacks at the hands of unseen entities who are clearly brilliantly malevolent and tenacious submitted by Paul Schroeder for your comment and assistance.

MAY ALLAH PROTECT US ALL FROM DEVILS.

Yes, may Allah protect us all!