Iced Out Gear, submitted by jumpyhu. I don't understand mainstream hip-hop culture anymore. The hating cops and white people in general, that I totally got as much as a white guy can, but for nearly a decade hip-hop has been becoming more and more "iced out". Everything is encrusted with diamonds, everything is as garish as possible and wasteful to the extreme. I saw a rap video where a rapper poured Cristal champagne down the crack of a woman's ass. A magnum of Cristal can run you over 500 dollars, so that's probably the world's most expensive bidet. I suppose it's no worse than the screeching suck-happy harpies like Paris Hilton that wallow in oppulence, but at least her and all of her friends don't start writing awkward songs about it.

Iced Out Gear is like the QVC of hip hop culture. It peddles fake versions of the most atrociously hideous examples of rap star spending gone wrong so that less financially blessed bling officianados can still feel appropriately "froze". 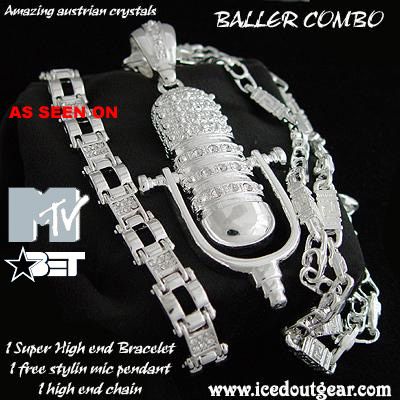 Yo this Max, givin yall a shout from FL!!! Ma NY Yankees Spinning Medallion jus got in, damn, that shit is off tha hook, I got these Marlin Fans grillin chain, they hatin on it, LoL, Ma shit is great, I even got a Chain & a Free Ring with it, "SAY WHAT!!"

The Baller Combo is no doubt a hit with toddlers and easily duped American Indian tribes everywhere. I also think that the "SaTiSfieD CuStoMah" instantly negated every bit of rap slang by including "LoL" in his e-mail. Throw'd and Frozen rappers do not LOL, it's like mixing gasoline and fire.

Speaking of a blast of flesh-cooking retardation; PIMP CUPS. 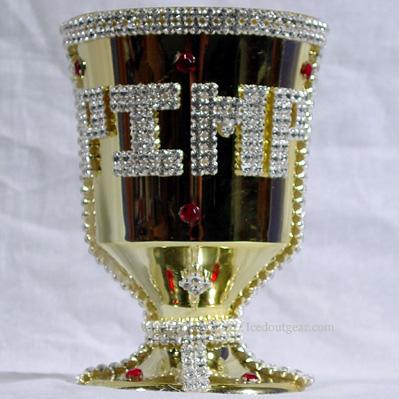 This is our best, top of the line pimp cup with MAD extra trimming all over the cup, up on the base. This cup also has way more faux gem stones than our regular pimp cup. If you are the main pimp on your block then you gotta show it off with this ROYAL pimp cup! You get diamond trim on the top and bottom of the cup as well as multi-color faux gem stones and of course up to 5 letters of whatever you want! Your choice of Gold or Platinum Style cup.

These cups are made of plastic and you should not drink out of them.

I could not come up with anything more idiotic than pimp cups if I was being paid to isolate myself in a bare room and dream of retarded things that should not exist. At the same time pimp cups are so relentlessly dumb that they are almost endearing and I am half-tempted to buy one.