Friday, Jan 11, 2002 by Rich "Lowtax" Kyanka (@TwitterHasBannedAllMyAccountsEver)
Know of an awful site? Send it to us and become a hero!

NEO HATE, submitted by me. Finally, a site that exhibits the beautiful fusion only possible by combining shitty rap, shitty heavy metal, and the absolute most retarded racism ever. If God wanted us to be racist he wouldn't make wearing a bedsheet look so remarkably dorky.

I became a racist because I lived in New York, a city that is controlled and heavily populated by Jews 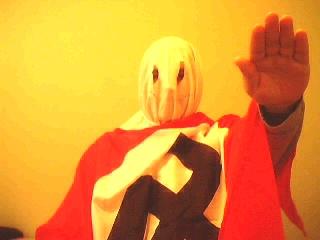 That sounds like a perfectly good reason to me! Well, at least compared to "I became a racist because women kept laughing at my small penis size and now I have an excuse to beat them in the face with a waffle iron next time I pull down my pants and they begin giggling uncontrollably." Plus he gets the added benefit of wearing some fine 100% cotton Target bedwear, which means he can go to sleep wherever he travels! Just imagine the possibilities...

BOSS: "Parker! Are you sleeping on the job again?!?"
PARKER: "I'm sorry boss but it's really easy to take a nap when your work outfit is a bedsheet with eyeholes poked in it!"
BOSS: "Hmmm. Well under the circumstances, I guess you couldn't help yourself. Go back to sleep."
PARKER: "Thanks, nigger!" (Falls asleep and starts dreaming about the time he caught his mother in bed with a Jewish man)

"Neo Hate" takes racism and anti-Semitism to a brand new level. Note that I claim it is a "new" level, not a "good" or "interesting" one. The self-proclaimed "Orginal Rhyme Core Thugs" (sic) appears to consist of one man (or at least one vaguely humanoid-shaped object) who performs the absolute most horrible rap / metal songs possible. Now I know what you're thinking: "But Rich 'Lowtax' Kyanka! This group has created songs with such high-quality names as 'Kill Arabs' and 'We Hate Them Niggers!' How could this possibly not be the greatest performance act since that one guy who blew a slide whistle while pantomiming a swimming motion back in the early 1920's?" The answer is simple: they are. Neo Hate is the greatest band ever, even greater than Menudo and Haloblack. If this were the late 1980's, I would say that Neo Hate is in fact the next Menudo only with less Mexican-ness and much more hatred for Mexicans. "83% more hate than the next leading band!" would be Neo Hate's slogan, which they would put on their tour van (assuming they could find somebody that would detail a van for $3.00 and an Arby's coupon). Suffice to say, I firmly believe that Neo Hate is one of the most energetic and spunky bands that I've seen in over a decade. In fact, I think they're so energetic and spunky that I strongly recommend you download the following wonderful media gems from their site:

ENEMY TERRITORY - An 11-second video of Mr. Neo Hate complaining about Jews in Brooklyn. The climax is when two people cross the street and one of them adjusts their hat. A must-see for all you people who can't get enough footage of people walking, or anybody with a hat-adjustment fetish.
Revenge on Arabs - A 2.88 meg mp3 upbeat hip hop rap metal tune. I wonder if the Arabs know that revenge is "on" them. Last time I checked, revenge was behind them and to the right.
Kill Arabs - I assume this mp3 takes place after "Revenge on Arabs" because it's hard to put revenge on a corpse. He might want to change the song title to "Revenge on Corpse" or "Kill Arabs After You Have Gotten Revenge on Them"
We Hate Them Niggers - Cheery, uplifting song about knitting. My favorite part is when the chorus starts singing about proper dental hygiene. A must-have for anybody who's a big drywall fan or aspiring zoologist.

Head on over to the music page and download as many mp3s as possible! We must archive as much of this intelligent and thought-provoking music as possible, as their evil server hosts may pull the plug on the site for violating any ToS rules. Everybody hurry up and download every mp3 and movie file the site has to offer before they're lost forever! We must archive this wonderful entertainment for future generations of grown men who will purchase cheap bedding and mumble into a Radio Shack microphone hooked up to a delay pedal! It's your civic duty as somebody who hates Jews, Arabs, and niggers!

PS: You may sign the guestbook right here, but you must hate some ethnic group. It doesn't specify which. I'd go with "Easter Islanders." I don't think anybody has devoted enough hate towards the residents of Easter Island, and this should be changed. Those fags from Easter Island are simultaneously taking all the good jobs and leeching all our welfare! Go back to Easter Island you filthy Easter Islanders!

UPDATE: The Jews, Niggers, Spics, Chinks, Wops, Towel Heads, Guineas, Punjabs, Nips, Wetbacks, Gooks, Illuminati, and Easter Islanders sabotaged the site and got it taken it down! It's a conspiracy!

UPDATE ON THE UPDATE: The site is back again! The white man has triumphed over the evil minorities!