In literature and in the collective unconscious spring has come to represent life and rebirth and winter death. For me this seasonal and symbolic change has long held a very real meaning because of the diseases that infested me on a yearly basis. You see, throughout most of my youth and even adult life I have possessed the immune system of an AIDS baby. Whereas most people have white blood cells and other arcane biological systems to resist disease like "skin" and "hair" I just sort of have all of my internal organs floating in a loose sack of putrid sewer water. When winter came so did the illness and I almost always got a nice case of the cold or flu, which is not all that uncommon. Less common was the fact that this always inevitably evolved into some sort of hideous creeping illness that made my respiratory system sound like the poorly maintained bellows of a rusty pipe organ. Bronchitis, sinusitis, the red lung, Monfank's conjecture, postpartum depression, hobo throat, and Doug's Disease were all common names around my household.

Imagine my surprise a couple years ago when I suddenly did develop an immune system and had two consecutive winters without falling gravely ill. I was on top of the world, basking in my newfound ability to endure deadly plagues of man, like soiled doorknobs and eating utensils not run through an autoclave.

The siege of my immune system is underway!Then, like storm-darkened clouds gathering on the horizon, came the three dread horsemen of illness. First came the many days of coughing and sneezing from my girlfriend. I don't mind helping out a sick loved one, but there was a certain amount of unease about the affair and I could almost see the puffs of bacteria gliding through the air towards the manned battlements of my immune system. Like the siege of Mandrake - or whatever that castle was in the Lord of the Kings movie with the elves and the kobolds - the noble defenders of my Parsons Fastness held the line against seemingly insurmountable odds. By the end of it the ranks of white blood cells were scattered about the pocked walls of the keep, dead and wounded, heaped in piles. My girlfriend recovered and I had just barely staved off getting sick. Then, no less than two days after her recovery, her parents came to visit us for Thanksgiving dinner.

Michelle's parents arrived in our apartment like a fell wind. Her mother was so sick she came in and lay on the couch under a blanket most of the time incubating further illness. Her father was coughing like the stacks of a factory devoted to manufacturing respiratory infections. I might as well have been a Cherokee Indian cuddling underneath a pox blanket with a steaming viral homunculus. We had a great dinner together, and then almost immediately after they left my bones started hurting.

If your bones start hurting you've either been exposed to radiation and are about to turn into a superhero or you just got walloped straight in the spine with a healthy dose of influenza. As I'm writing this I don't even know if I'm spelling things right because my vision keeps swimming around and making the letters look like ants. I've been popping Tylenols for the past two days to keep the fever down and I've snorted enough Zicam to give a kraken heart palpitations. My throat feels like it's seen the wrong end of a mummy's dick and the area around my nose could be used as a paint match chip for people refinishing fire trucks.

Even though I've got cold sweats like Capone's accountant at an IRS audit I also feel strangely honored to have been allowed to try on this year's fall disease fashions. Last year's trends are out the door and it's time to look at the hottest things for fall and winter infesting my body! As Carson from the Fab 5 would say, I've just got to zoosh it. I don't know what that means, probably something about kissing another man on the ass, but I'm willing to give you the straight dope on three of the up and coming designs for this season.

Class: Bacteria
Vector: Airborne short-distance, short-linger (unless conditions are optimal)
Origins: Niptorosis is a recent offshoot of the Melcloria family which includes Adventuritis Melcloria and Stromthurmonoliosis Melcloria. This ravenous bacteria can lay dormant for long periods in warm moist environments like sewers, vaginas, mouths, hampers, or the basements of comic book shops. When inhaled it immediately attacks the respiratory system and moves on gradually to the nervous system and teeth.
Symptoms: Initial symptoms include a cough, red and watery eyes, and a rise in vocal octaves. As symptoms progress sleep becomes restless and punctuated with frequent involuntary high-pitched squeals. Those infected with Niptorosis become increasingly irritable and prone to throwing plates, cups, and nearby vanity trophies at those around them. The final stage of the disease includes massive swelling of the torso, suppurating sores that resemble wet emeralds, elongation of the molars into various chess pieces, and fluctuations in nearby gravitational fields. While usually not fatal children, the elderly, and those with immune deficiency should contact a physician immediately.
Treatment: As soon as symptoms begin to show for Niptorosis you should immediately submerge your entire body in a bathtub full of cold water. If necessary add ice every five to ten minutes. Play soothing music and burn scented candles to help relax the bacteria and get them in the mood. When the bacteria is ready, place four live birds in the bathtub with you and hang on tightly while they eat the bacteria that comes out of your eyes.

Class: Virus
Vector: Contact, minimal-distance/long-linger
Origins: Axioma is the result of a trade between the Boston Somiticulosis and the New York Mets. Somiticulosis gave up Devarita Somiticulosis and Axioma Somiticulosis in exchange for Darryl Strawberry's cocaine suppositories. Keep in mind that science hasn't authenticated the origins of Axioma and this may all be the result of a fever dream I had from eating bad rye bread.
Symptoms: The majority of initial symptoms are indistinguishable from those of the common cold, making Axioma a difficult bug to detect in time to treat. During its second phase Axioma virusoids concentrate in the bladder and begin generating virus nodules called "cornels" that look identical to pieces of corn, albeit corn that is usually coated with blood from the urinary tract as it tears a painful way out through the urethra. While the cornels are forming the virus begins disrupting the central nervous system so that victims see a very specific type of hallucinatory imagery. For unknown reasons Axioma causes those infected to see the face of Bill Cosby hovering in front of their vision and surrounding by swirling and contracting fractal patterns. Most are driven to suicide soon after these hallucinations begin.
Treatment: If caught early, Axioma can be treated by bombarding the victim's genitals with high-yield radiation. While this renders them sterile and impotent, it is almost guaranteed to destroy the virus. If not caught early the virus is untreatable and almost always fatal.

Class: Non-aquatic Amoeba
Vector: Ingestion, long-distance/long-linger
Origins: Vetritis Maleophage is an unusual land-bound and relatively large amoeba. It measures about 450 miliocronimeters, or about 1/8th the size of a grain of rice, and can actually be seen with the naked eye as a sort of pinkish nodule. The origins of Vertritis are not fully understood. One theory currently circulating among virusonomers are that Vertritis is not terrestrial in origin and may have actually been brought back to earth by John Glenn who is believed to have licked a moon rock while on the Apollo space missions. Another theory gaining momentum is that Vertritis was actually imagined by Stephen Hawking who, as you well know, is so smart and crippled that he can make his daydreams manifest themselves. His reasons for unleashing something as destructive as Vetritis on an unsuspecting mankind may have a little bit to do with the whole "totally paralyzed" and "robot talky" thing.
Symptoms: Within thirty seconds of ingesting a Vetritis amoeba the unlucky recipient begins to swell around the joints and over the course of ten minutes or so this swelling can grow quite painful. Abruptly it will stop as the Vetritis amoeba cocoons itself in their brain and begins growing to its second stage. After 48 hours of incubation the amoeba will emerge from every orifice, including their pores and eyes, having grown to almost a thousand times its original size. This is always fatal to the victim and the enormous amoeba will slink off using pseudopodia to drag itself along the ground, showering tiny larval amoebas behind it.
Treatment: The only known treatment for Vetritis infestation is to get a priest and have him place dynamite in the victim's mouth and then explode the dynamite. This is usually fatal for the victim and once in a while it kills the Vetritis amoeba.

My favorite is Ritzy. He talks to me when I close my eyes and tells me stories about far away lands. Now, if you'll excuse me, I'm going to go rub my face off with sandpaper to get at this vault of mucus hiding in my sinuses.

Your Band Sucks - Tool and the Worst Songs Ever

This week on Your Band Sucks, Dr. David Thorpe finally gets around to saying some unkind words about Tool. Could it be that a million dorky Tool-worshippers can be wrong? I'm assuming we already know the answer to that. 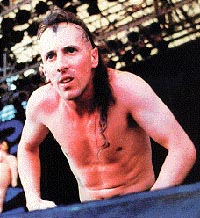 The man is just singing about angst and non-specific malaise, just like every other whiny hard-rock nerd. I'm sure Tool fans like to argue that he poignantly sings about his own traumatic history of abuse, but come on, it's not like that's a rare commodity these days; all it does it put him in the same lofty poetic stratosphere as the guy from Korn.

As a special extra added free bonus, Dr. Thorpe has also compiled a list of the ten worst rock and roll songs of all time. You'd be a fool not to read it!