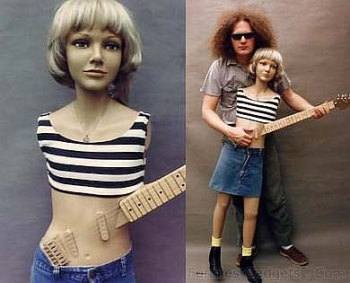 My dick is like Keith Moon; After hours of banging away, it's been known to destroy everything at the end of the evening in a very violent way.

My penis is like Nine Inch Nails. It's occasionally impressive but nobody cares about it 99 percent of the time.

My dick is like Tom Waits: Performs like it was soaked in a vat of bourbon, left hanging in the smokehouse for a few months and then taken outside and run over with a car, but goddamn does it have a dedicated cult following.

My dick is like Brian Eno: enigmatic, occasionally frustrating, and more interesting in theory than in practice, but works great with other people.

My dick is like Captain Beefheart and his Magic Band. Almost no one gets it, and those who do are faking.

My cock is like Rick Astley: it has a habit of popping up when you least expect it.

My dick is like Akon. No matter where you go, its blasting in your ears.

My dick is like Henry Rollins, it aspires to do many different things but is mediocre in all but one of them.

My penis is like heavy metal, it only appeals to fat chicks

My dick is like GWAR, it's played mostly for laughs and tends to spray blood just as things are getting interesting

My cock is like Brian Wilson, it rarely comes out of solitude, but when it does it leaves everyone awe-struck and begging for more