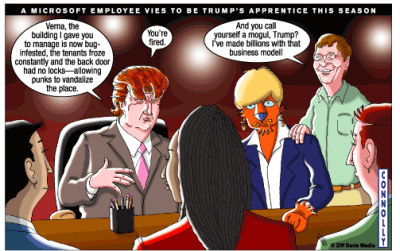 "Do you sometimes sympathize with people who have gone on shooting sprees?"

"What are your opinions on drug use at the workplace?"

I guess I'm against it since I don't want some coked out motherfucker to stab me in the gardening section? Way to ask some good questions, Menard's.

My father likes to relay this story to people sometimes. Years ago, he and his brother both applied for a position as event security for a local arena. On the written test was a question, "You're walking through the woods. You look up in a tree, and then hurry off to tell someone. What did you see?"

My father said "a parachutist", and got the job. My uncle said "a rabid raccoon" and didn't.

I was interviewing at a hospital for an IT job, and the manager asked me:

"If you saw an old woman fall in on the floor, would you laugh?"

Truthfully I answered no. I don't think old women falling is funny, especially in a hospital when they are probably really sick.

This one wasn't me, but my friend. He's a real class act.

"So where do you see yourself in the future?"

He did not get that job.

At which point he opened up Wikipedia and read exactly what it said. The interviewer was surprised and said "Oh wow! This is exactly what I have!".

The strangest question I've ever had was "What makes you laugh?"

I was being interviewed for a software engineering position when I got asked that one; It was the first question out of the interviewer's mouth, before anything else. Perhaps it was intended as an icebreaker or perhaps as a deliberate spanner in the works to try to shake me up a bit.

a) "Goatse. What? Oh, Google it. Yeah, right now in front of the Big Boss and the head of HR, go on."
b) "Pictures of cats in amusing poses with badly-spelled captions on them."
c) "This question, for starters."

To my shame, I waffled on pretentiously about absurdist humour and came across as the creepiest nerd ever to show up for an interview who wasn't actually wearing a foxtail and fur ears.