during our downtime between wwii movies, me and the other hitlers get gigs doing reenactments for the history channel. it's not glamorous, but it pays the heating bills.

some of the younger guys get upset when they hook up with a lady that wants them to start whispering german in her ear in bed, maybe leave the jackboots on. keith had that one out in westchester that drew on the camp tattoo with a bic ballpoint the first night she brought him home, usually they work up to that but sometimes they just come right out and say they wanna bang hitler and I'm not in a position to judge anyone.

frank gave his heart and soul to this business but he's black and also it turns out he was destined to impersonate a great painter instead. he won a cable ace award for "black grandma moses". we try to laugh at the irony as we painstakingly depilate the edges of our mustaches.

one of these guys, the one who tries for the old, 1945 stressed out hitler, has to keep his facial hair and grooming in shape. he is a kind grandfather to his seven grandchildren. somewhere in america, there is a child with fond memories of poppa hitler

when we finally met kurt's boyfriend sam, none of us expected him to look so much like hirohito

we have learned to wear sunglasses and hats while we are preparing out appearances for audition. we would love to go looking at least somewhat normal and wait to fix our hair and upper lips for when we are actually cast, but escalation is in the nature of these things, and we cannot leave any advantage to our rivals. when we are looking fully hitler, sometimes it is actually easier to travel in groups than alone. already so much of our time is spent alone. if one if us is walking in a park by ourselves, the harassers and the people who feel an anger beyond reason will drive us away, their eyes naturally full of a look of sheer hatred that i had to practice for years to attain. when they come for the hitler impersonators, will the rest of us say nothing? no, for we are brothers.

He walked across the bedroom and opened the closet door. He brushed hangers to the right, reached into the shadows, and brought out the sham uniform. It hung from his hand like a vulture-skin. He touched it with his other hand. Touched it...and then stroked it.

Unionization is key. A little known industry story: the Foo Fighters video for their single "Low" was originally written to have Dave Grohl and Jack Black's drunken tryst take place while they were dressed as der Führer. The Hitler Actors Local 432 protested as neither the musician nor the comedian are union members. The video script was re-written. A small victory, but an important one.

After a very long time he took it down and put it on, dressing slowly, not looking into the mirror until the uniform was completely buttoned and belted (and the shame fly zipped).

He looked at himself in the mirror, then, and nodded.

He went back to bed, lay down, and smoked another cigarette. When it was finished, he felt sleepy again. He turned off the bedlamp, not believing it, that it could be this easy. But he was asleep, five minutes later, and this time his sleep was dreamless. 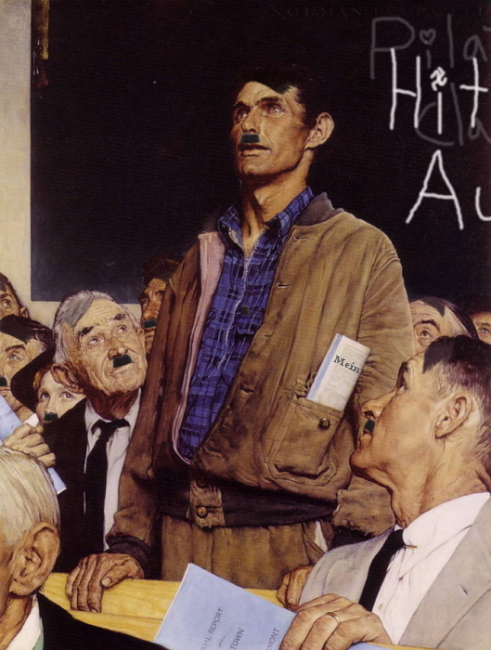 almost nobody outside of truly obsessed film buffs knows who Konparu Minamizato is. A forgotten actor from a forgotten age and place of cinema. You can't get Uma kaeru from Netflix, but we've all seen it, a short and low quality movie. I own a burned copy and I don't even speak Japanese.

I still feel the connection, though, calling over 74 years.

Imagine the looks of pain and shame on my parent's faces, when I came home and told them I was Hitler. "But son," said my Mom, "you CAN'T be Hitler! We're jewish!". I had never seen tears in my father's eyes before.

But they knew, deep down inside, that I had always been Hitler. A cruel twist of fate perhaps, or a vicious streak in God? Either way, there's no denying it as everyone in synagogue made clear - I am the jewish Hitler.

some of us are specialists. it really depends on what the filmmakers are looking for in their hitler. do they want someone ever-so-slightly effeminate? a gaunt hitler? a sweaty hitler? a perpetually angry one, or a softer, more humanized performance? most of us strive for accuracy foremost and hope to tweak our performances to what they're looking for, but one cannot fully predict nor control these things. sometimes i recall that episode of the twilight zone in which a man wishes to be the most important man on earth, and finds that he has become hitler in his bunker - that was Luther Adler, not really one of us but respected nonetheless. at other times i think of the more obscure footage i have studied for my role - of Hitler in his day-to-day life, laughing and smiling and with the people that he loves. eva, i whisper to the darkness in my room. let us forget all of this and run away with one another. the world may hate us for the rest of our lives, but we will always have one another.

bad dreams aren't uncommon. We all get them. When you spend your working day, your most successful days, on sets painted like bunkers, or podiums draped with eagles and swastikas, bad dreams are not just commonplace but expected.

last night, I dreamed I was in my trailer on some movie set somewhere. I took off my costume, only to find another underneath, this one less garish, less suited to film cameras. I knew, somehow, that this was no costume but rather a uniform. His uniform. Unbidden by hands reached to the loose, exposed skin of my neck, peeling it back like a mask to reveal his face underneath...

I wake in a cold sweat and disturb the cat sleeping on my hip. His name is Addie, I tell people he is named for an uncle, not the monster who has become my livelihood. No chance of getting to sleep, so I watch the tapes again, trying to capture the expressions in a more exact way. As I do so, I feel something grow under my skin.

James is . . . good-looking. He's handsome, when he smiles, his limp hair a flip irony, his mustache a tiny black Ark on a white sea of sex appeal. He can pass. Why is he here? Why is he doing this to himself, to us? We hate him. When we come together in this room, we hate him more than we have ever hated anyone in the history of the world.

but for the method hitlers, the struggle is the bunker. those last few days. the rankness of the failure. the bitterness of knowing that of all the people in the world, you alone are adolf hitler: all your promise and potential has come to this.