Those three words, so often spoken by those for whom we audition. Occasionally it is by an intern or an assistant, but often - far more often than one would believe - it is by a casting director, director or producer. Each time, the speaker says them as though he were the wittiest man in the world, and as though it were the first time we had ever heard the joke. Some sneer and walk out. Some blush red. I smile and laugh, but each time I feel a piece of myself die inside, as though I were prostituting myself.

There's a lot of footage of Adolf Hitler, but not nearly enough; you've got to be able to fill in the gaps. A true Hitler can be Hitler jogging, Hitler frightened, Hitler with a headache. Hitler pretending to be interested in your story about your dog. Hitler realizing he's drinking milk that spoiled three days ago. Hitler watching Spongebob and pretending he's looking through want ads. Mastering Hitler-ness is no simple task.

I don't even care anymore when all I get are Hitler roles. when you have the look, it's a curse. you go into an audition to play the hunky lead role and all of a sudden the director asks you to play the guy in a Hitler costume at a house party. I met an attractive woman at the bar yesterday. she walked up to me and told me I would make an excellent Hitler. sometimes I wonder if it's all even worth it anymore

there's a butcher at the kroger in van nuys who... sorry, it's difficult for me to talk about this to an outsider. sometimes i'll go down there and pretend i'm buying hot pockets. i'll open the freezer case and watch him through the door. the imperious way he addresses his coworkers. practiced, but still so natural. the way he makes the customers believe that all their problems, all their obstacles and indignities, can be blamed on the inferior bloodline of the cows they've been eating. i want to meet him. i want to tell him that i'm here and that i understand. we all do. but we can't afford the competition.

this is not good. the audition is in an hour and I still haven't regrown my mustache. I went to the store today but all the makeup pencils had been combed over by the other Hitlers. I considered using a sharpie but the other guys can smell desperation. I comb through the house frantically in search of something better and see this audition slips right through my hands. in an act of surrender I sit down and drop my face into my hands and sob. suddenly I see my cat rub up against my leg and purr. I spy a tube of super glue on the counter and inspiration strikes

I remember when Terry finally got out. he finally managed to get into the Charlie Chaplin circle. i wish him well, but the resentment still runs deep. we never go to the same bars, the Charlies and us. 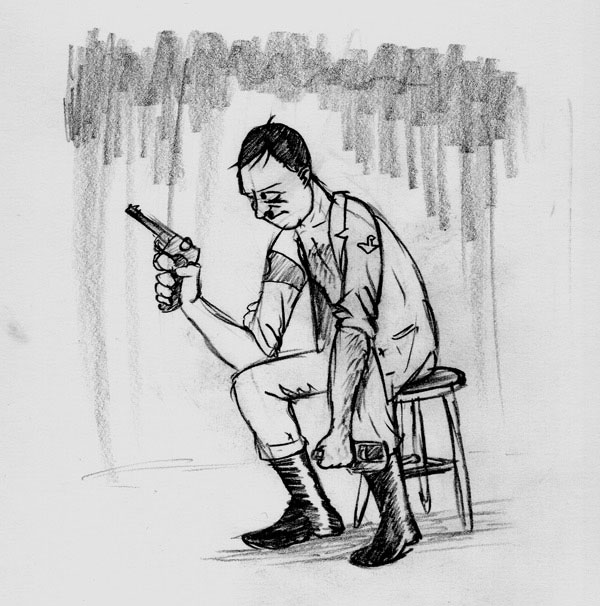 they're real. I have a certificate of authenticity and everything.

They're not that special, and the passing of the years has left them worn, but they're the real thing. Not the ones he wore on any special occasion as far as I know, certainly not the ones he wore in the bunker, those are long burned. Just one of a few dozen pairs that a defecting chambermaid got her hands on.

I only wear them on special occasions, like an audition for an a-list part, or my first day on set.

Or when I'm feeling down.

Nothing in this world is sadder than the sight of a grown man, drunk on schnapps, sitting in his apartment and crying.

Naked except for Hitler's underpants.

the therapist asked me to do an exercise he called "house, tree, person". My pencil moves easily over the paper. I'm quite a good draftsman when I want to be, the last role I did had a scene with me- with my character sketching. He gives me as long as I want, and I get quite into it, falling into almost a zenlike trance as I draw the picture and go over the lines for my next audition in my head.

When Dr Morgenstern looks at the picture, he frowns slightly.

The house is the Reichstag, huge, glorious, with touches of soot at the windows.

The tree is a dwarf apple tree, its branches twisted into claws.

Dr Morgenstern looks at the person in the foreground. I look down at my lap, blushing.

You'll think I'm lying, but when you're in uniform and full-Hitler, there's not a dog on earth that'll growl at you. Sometimes when I'm feeling really low, I'll go to the park in regalia, just to pet the dogs that run up to me, their tongues lolling, eyes twinkling. Later their owners will eye them suspiciously as they lie napping in a slanted sunbeam, legs twitching, dreaming of running with Hitler.

When people ask me why I chose to become a Hitler, I usually say for the challenge, the thrill, of playing the greatest villain in history. I wanted people to see me and sympathize with me, and be disgusted with themselves. Really though, there was more too it than that. Something drew me to Hitler. Something undefinable, something irresistible. Let me try to explain. My first job as Hitler was right after of college. I'd been in love with theater since I was twelve and I was still coming to terms with the fact that I'd never be a movie star -- I didn't have the face for it. I was considering giving up acting entirely when I saw an opening at a local playhouse. It was a play about World War 2 and the only open parts were for Eisenhower and Hitler. I didn't want to get a haircut, so I picked Hitler. I am dead serious. After that, I was offered a job playing Hitler the bad dog owner in an obedience school commercial. Someone else saw me in that and invited me to do a bit part on for their low budget comedy show as the main characters' imperious landlord Adolf. That show only lasted six episodes, but by then I was a Hitler. It was what I did, and it came naturally to me, and the best part was it made acting fun again -- or it used to. Now, after fifteen years of playing Hitler, I feel like, sick as this may sound, he's become a part of me. I can't escape him. So when people ask me why I chose to be a Hitler, the reason I can't answer is because I never chose to be Hitler, he chose to be me.

Sometimes the question confronts us over drinks, spilling from the mouths of one of the young Hitlers, the ones who don't know any better. Sometimes a rail-thin skinhead corners us in an elevator. Sometimes, most of the time, it's a question we ask ourselves, and there is no one in the echoing cathedrals of our minds to hear our answer.

Some Hitlers will say "Of course not," try to dodge the question as something utterly absurd. Others will bluster, say they'd like to punch Hitler in the nose, or shoot him dead. I wonder if they are sincere, if we men who have spent so much time climbing within his skin could really ever truly wish him harm. Others try for humor, saying they would do it to meet Eva, or to perfect their technique. Weak, sickly, black jokes that draw laughter that sounds like a smoker's cough. For us, even this tepid humor is vital necessity. I always liked Randy's response the best. When someone asked him the question, Randy would look down at the floor, like he was ashamed. Then, suddenly, he would spring to his feet, his left arm stabbing skyward, the Voice rolling out of him in its shrill, sharp-edged perfection, his eyes alight with daemonic flame.

"I don't know," he would say, in perfectly accented German, standing on the balls of his feet, rearing like a cobra about to strike as his voice rose, sharpened. "WOULD YOU?"

Randy's answer was always closest to the truth. They say that Hitler never referred to himself as a politician. No, to the end of his days, he called himself an artist. A painter of war. A sculptor of genocide. An actor, evoking and channeling all the raw, murderous gorilla-fury of mankind. An actor.

We've all watched the tapes. Speeches, walks in the Biergarten, the Olympic Ceremonies. We know his mannerisms when we see them. Of course, we are imperfect men in an imperfect world, but sometimes, he shows through. With Randy, it was the Voice, not just shrill, but Hitler-shrill, pitch perfect. For John, it's something in the stride, the set of his head and shoulders. For Eric - a new kid, a kid who should be doing Notler work but is too damn stupid to let this go - it's the hands. I don't think the kid even knows it, but a man who shakes his hand has shaken hands with der Fuhrer. Moments of perfection amidst a sea of mediocrity, but they add up. In aggregate, they form a mosaic more powerful and terrible than the sum of its parts.

None of us are playing Hitler. Hitler is playing us. Hitler is still here, panting in the collective unconsciousness, grinning at humanity through a paper-thin shroud. We are the holes through which he peeks.

There are a lot of questions I don't have the answers to. Where my next paycheck is coming from, what I'm going to say at the custody trial, why I got into this rotten, soul-sucking business to begin with. But I've never had trouble answering the big question. Would I like to meet Hitler? No. I already know him better than I know myself.