Pierre is an enigma. None of us can figure out why he's a Hitler. Don't get me wrong, he's good at it, and he can do the stern voice of command like no one else, but he doesn't sit with us at casting. He sits with the Gorings. He helps them do the accent, he discusses motivations, he even shows them how to hold their head in that special way that conveys both power and insecurity. So, every audition it's fifteen Hitlers and one guy who's just a shave and a haircut away from being the perfect Hermann Goring. One day, after he once again failed to impress casting with his firm jawed, stern Hitler, I asked him why he spends his time struggling to be a Hitler, when he's clearly born to be a Goring. His response was, "what kind of life would that be? Real men don't bank on the skills they're born with, they go out and forge their own destinies, and that's what I'm doing." After that day, he started making more sense. Sure on the outside he may look like a Goring, but in his heart of hearts, he's all Hitler.

if getting paid fifty bucks plus travel to jump out of a kid's bedroom closet and scare him into going to his bar mitzvah the next day is wrong, I can't afford to be right

when I start to get depressed, I take out a yellow legal pad and write out the list again. Guillermo Díaz on Jimmy Kimmel Live, Benton Jennings in An American Carol, Liam Hearne in My Big Fat Independent Movie, Steve Montague in Ultrachrist, Christopher Carroll in Little Nicky, Neil McCaul in Heil Honey I'm Home, Chris Kattan on Saturday Night Live.

Debased, degrading parodies. Insults to the craft, the art of the role.

The list goes on, covering pages in number two pencil in crabbed script. When I'm finished I strip, clean, and reassemble the rifle. Not long now.

My worst experience as a Hitler was my high school reunion. I'd cut my hair and shaved the mustache, and I went determined not to let anyone know what, exactly, I did for a living. At first it was working. When people asked what I did, I said I was an actor. If they asked what I'd done, I said it was mostly stage and historical reenactment stuff and they probably hadn't seen me in anything. I even reconnected with my old girlfriend Katey who was looking better than ever and she'd given me her number. Then came the speech. I don't know how they found out. Maybe someone was watching the History Channel at 3 AM and recognized me. Maybe they found my IMDB entry, but there I was, getting introduced in front of hundreds of people I knew as a professional Hitler. Then they made me get up and talk about being Hitler. They acted like I was this big success, but I knew they were laughing through their hands. They even talked me into doing the voice. It was horrible. Afterward, Katey made me give back her number. She's Jewish.

The worst, of course, are the art films. Very few of us are trained shakesperian actors, so when a director tells you to contemplate a mushroom for forty four minutes what the hell are you supposed to do? Imagine a 15 hitlerii in a swimming pool, filled with chocolate syrup. As we swam around and drank the chocolate we finally got to the bottom, only to find a single bagel and recoil in horror. Sometimes my piss still smells like hershies.
I guess it's not all that bad though, I had my only sex scene in an art film, it's a shame my co-star was an oversized rubber cherry blossom.

Most people assume the worst part of being a Hitler would be the mustache, but it's not. You can explain the mustache in 30 seconds and then you're not Hitler anymore, you're just an actor. Same with the hair. Same with the jackboots. No, the worst part of being a Hitler is the voice. There comes a time in every relationship where they catch you in full Hitler mode. Maybe you're screaming in German at the mirror before an audition, maybe they get you a little drunk and coax it out of you, sometimes just watching you do it on TV is enough. After that they don't see you as a regular guy anymore. Suddenly you're a regular guy who sometimes transforms into Hitler. Within a week, women stop returning your calls, friends stop wanting to get drinks with you, and people you've known for years suddenly start getting nervous when you're around. Nothing is worse than seeing your great-uncle who fought in the war refuse to look at you at Thanksgiving dinner. Then there're the people who don't freak out. The girls who suddenly develop an interest in bedroom roleplaying. The guys who are always offering to drive you to auditions just so they can gawk and smirk at your outfit.

These days, when people ask me what I do, I say I'm a painter.

Don't even get me started on the History Channel. Those sons of bitches fucking refuse to hire us. They think they can get by with their god damned fuzzy black and white Hitler footage that everyone has seen a thousand times.

History Channel controls about 93% of the Hitler market but since our lobby is so weak and underfunded we just can't tap into that piece of pie. It's sickening. 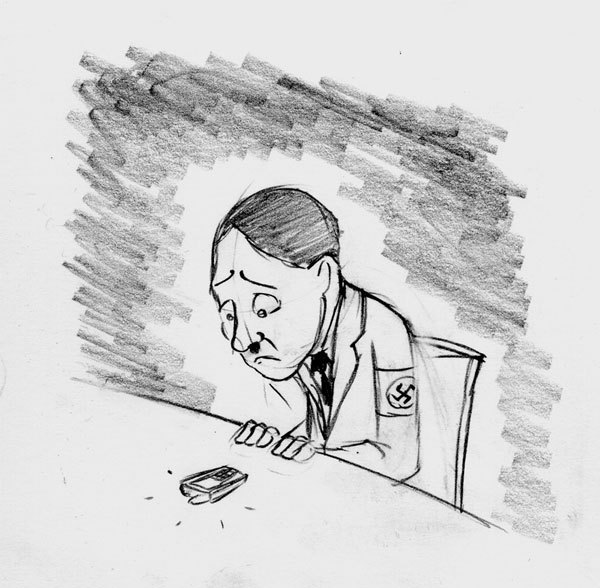 there used to be an old man, a Holocaust survivor, across the hall from me - poor guy got blinded at the tender age of 9 when a camp guard at Bergen-Belsen hit him so hard in the head with a rifle butt that it tore both of his optic nerves practically to the breaking point - he can barely see anything now. i used to invite him over for breakfast and dinner all the time and listen to his stories, and i'd make him blueberry waffles or a jalapeño omelet (his favorite) while he'd talk about the few years before, the family he can remember from before kindly strangers found him and took him in as their own (they stayed together, though they came to America, after the war). then one day his daughter came to visit - she barely paid any attention to the guy, was extremely neglectful, though I went over and cleaned his apartment for him all the time and provided most of the man's company and a good portion of his food - he introduced me to her, when I was on my way out to another audition, and she flipped out. stuck her poor dad in a nursing home. she said it'd be better for him. sometimes i write to him, in that fucking charnel house for the elderly that his oh-so-loving daughter put him in. he hasn't written back.

Most people are surprised to know how many Jewish Hitlers there are, but it makes sense when you think about it. Most people with German accents in Hollywood are Jews, and Jews also tend to have an abiding interest in the Holocaust, for obvious reasons. There are other factors that make it appealing. Some Jews like to demonize a man who did so much to demonize them. Others know that they're much less likely to be automatically labeled anti-semites than the rest of us. Still, when Noam and Josh and the others go home for Passover and have to explain to their families over and over why they choose to do what they do, that takes courage, and courage, more than anything, is what defines a Hitler.

The first-time Hitlers always screw up at some point during filming. It's usually nerves, and it happens to everybody. "Heil"ing so hard you dislocate your shoulder, tripping and knocking over a craft service table, even accidentally getting coffee all over the uniform.

We tell them it's all part of the job, that it's no big deal. We tell them that even the Hitler in Indiana Jones and the Last Crusade was so nervous that on the first take, he signed the diary with his real name in big looping script. Normally it wouldn't have been so bad, but that was the only copy of the Grail Diary at the time, and the prop department was furious. They finally just replaced the front page with a mock-up made from some PA's day planner; you can tell if you watch for it.

If even that doesn't cheer them up, we tell them about the time Fred met Larry David.

no work for a few months, now. Luigi's had to let me go. They say it was just slow business, but I knew the truth. I'd been zoning out more and more. On my last day a couple ordered and I answered them in fluent German. I haven't spoken German since high school, except on set.

I'm starting to lose track of time. I saw a newspaper that said it was Thursday, last I remember it was Sunday.

Have I been going to sleep earlier each night?
Have I been being Hitler longer?

One day, almost two years ago, a young man came to me, my next door neighbor's son-in-law. I had shaved the mustache and slicked the front-lock back. Now I was just another tenant in the building who picked up the mail and took out his garbage. The young man was anxious and jittery, talking about the access to the beach. At last, he worked himself up to why he wanted to meet me.

I looked him over. He had the look, certainly. With coaching, he could perhaps learn the voice and the mannerisms. But was he truly a Hitler?

I took him to the local pizzeria. The menu was old and falling off the wall. We ordered a simple medium pepperoni pizza. We waited over half an hour for it to arrive. There was a "C" in the window, and we were never so much as offered a price deduction. Our cheese was runny, the dough was soggy, and the pepperoni was burnt. The cheese and red peppers shakers were nearly empty, and the openings were clogged. I pointed out to him the other people in the restaurant.

"You see these other people?" I asked. "They're all having the same experience as you and I, and they all believe it is your fault."
"Why?" he responded. "I do not own the restaurant."
"That is incorrect," I said. "You have told them all this is the best restaurant in Hollywood."
"But it isn't," he said.
"But they believe you have said it is," I said. "And because they believe you said it is, even though you didn't say that, it is to you, as well."
"But the service is abysmal, the food is disgusting, and the cleanliness is criminal," he said.
"But they believe you have said it is not. So you have, but you have an answer to that," I said.
"What?" he asked.
"The owner is a Jew, or perhaps a gypsy or a homosexual or a Pole. They are swarthy. I would say gypsies," I replied.
"I don't understand," he said.
"Then you will never be a Hitler," I replied.

Last summer, I heard from him. He had accepted a job in marketing with a vitamin supplement manufacturer. He has a home in Woodland Hills, an SUV and his first child on the way, a girl. He ought to be happy, but he intimates he is not sure. Meanwhile, I pay more rent than I can afford on a studio apartment in Hollywood and eat chili mac as I fall asleep on my couch in front of Craig Ferguson. But I am a Hitler.