Oh well, film isn't my only outlet. There's always stage, or TV, or...

Who am I kidding?

I pick up the card with Rob Black's name on it and dial the number as I start to feel the dull sting of heartburn.

The experience that non-Hitlers will never know is one of diffuse representation. We are not Hitlers - we are "Hitlers", a shorthand description of the totality of evil, characterized in the broad strokes of hair, moustache, uniform. The natural inclination of any human being presented with this is to re-cast the threat as allegory, render it impotent. Thus the casting calls for Hitler in a field of daisies, Hitler in a tutu, an ineffectual clown, a cheap gag stripped of fascist power. To be a Hitler is to be yin and yang, the greatest and the least, simultaneously flesh and spirit. Skulking about in Argentina or Peru even now, in the shadow of the American psyche, a necessary and schizophrenic role, a role for whom those who breathe stolen life into its skin reap few benefits. Certainly not dental.

"A pack? A herd? A solution! That's what we are! A solution of Hitlers!" David cackled, and kept repeating it in a too-loud voice until Jürgen was forced to yell at him to shut up, dammit, people were staring. David blinked twice and broke down crying. Later we found out he'd lost visitation rights because he went directly from an audition to his son's soccer game. A vision of the other parents frozen in horror as Hitler jumped for joy, cheering his son's first soccer goal, will never leave my mind.

We haven't gone drinking with David in a while.

People think it gets easier as time passes, but it doesn't. Even the novices can't help but pick up a bit of the history, some of the biography of Hitler, just from memorizing the speeches. For us old hands, we dig in to his life, find out what made Hitler himself, the circumstances that shaped him. When we step on stage, we press that mold upon ourselves. It makes us better Hitlers - necessary for the job really - but it opens the door to that most unexpected of emotions. Envy.

Caught me by surprise the first time I felt it. It was Sunday evening, and I'd spent the day in a critique of Hitler's paintings, uniform half on and stubble on either side of the mustache. I'd have to go out for a new can of shaving cream, there was a reading tomorrow. Did I have the right speech memorized - what if they wanted improvisation? Was I supposed to call Mary today? It must have been so easy for Hitler, all he had to do was what came naturally. If I want to pay this month's rent, I have to be the both of us, and I'm not even sure if I'm myself. Even in the bunker, Hitler was every inch a Hitler - how could he have been anything else? He couldn't know how good he had it.

Last week I caught my own reflection in a mirror and broke it with a scream of Teutonic hatred. I guess that means I'm a real pro now.

I'm worried about what's going to happen to the younger Hitlers. Work is drying up, or being done by big names. No one writes shows set during the war anymore, it's too old. The documentaries have started using more stock footage. All that's left are the prestige films and the art house crap, and even those jobs are being snatched up by regular actors just looking for something else to add to their resume. They don't care about Hitler the man or even Hitler the idea. All they care about is the recognition they get for "playing" (if you can call it that) one of the most interesting men in history. What does that leave for the kids? Noam is just 23. Sure he can get buy playing younger Hitlers now, but what happens in twenty years? Will there even still be Hitlers? Will anyone still care? It's these kinds of questions that keep me up at night.

At times, I feel guilty. Not for portraying the greatest villain of all time - it's dirty work, but someone has to do it. No, I feel guilty for what I'm doing to my fellow Hitlers. We are the only ones who understand each other, but there's only so much work to go around. Every time I am cast, that is one less opportunity for Steve or Alan or Quentin to put food on his table. My very existence depends upon denying my brothers their shot.

Some nights, I lay awake thinking I should retire, for the good of the others. But what if another, better Hitler comes along the next day? One who out-auditions all of them? Then I'll have retired for nothing.

Other nights, I imagine convincing them all to take other work - as Stalins, as Capones, as Caesars. Leaving myself and myself alone as the Last Hitler Standing, the most successful - and loneliest - man in the world. 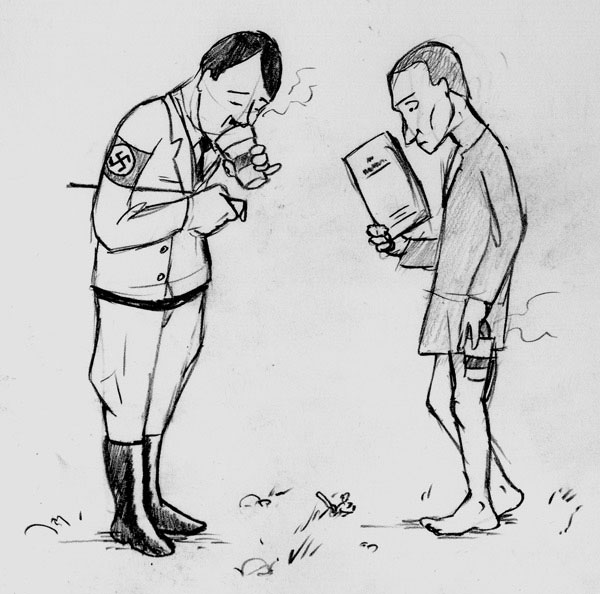 Casting can be a farce. Every time, a different Hitler, so different they would not recognize each other in an elevator. More stooped, they say, and the line of Hitlers sags perceptibly. We need a spirited Hitler, they say, and several dozen eyes blaze into life like crematoria. Our Hitler must be a tragic figure, they say, and we need only let our true selves peek through.

The Germans and Austrians, of course, understand the gestalt of Hitler better than any, but they are, for my purposes, often too hesitant, too apologetic. In gazing into the abyss of Hitler, they know too well that the abyss gazes also into them. The Eastern Europeans - the Russians and Poles and Hungarians and Czechs and Slovaks - bring an unequaled passion to the role, but their passion often spills into anger, and it is impossible to portray accurately and compassionately that which one hates with such vitriol. The French are more detached, and it shows. They see Hitler as an object, not a subject. The Americans and the British seem almost schizophrenic in their portrayals. On the one hand, they are master thespians who try to enter the head of the character. On the other, their appreciation for his iconic stature leads them too often into caricature, even parody. The best comedic Hitlers are Anglo-American, but the worst dramatic Hitlers are the same.

For my preferences, the Spaniards are the best Hitlers in the world. Perhaps it is true that to truly be Hitler, one must possess a passionate but by necessity secret love of Hitler - to understand why he is hated, but to admire him nonetheless.

Had I to do it all over again, I would have been born in Barcelona.

Bruce has an idea for supplemental income. He and Eric are capable chefs, and most of us have our own uniforms, so a catering service isn't out of the question. We think it'd be best to stick to light fare, appetizers, things that don't take much time to prepare.

You'd be surprised how hard it is to learn how to goosestep -- I don't mean the forced half-assed stepping you see sometimes, but an honest to God goosestep. It takes days of practice to be able to do it right consistently. that's days of walking to the store with your jackboots kicking into the air. Days of dirty looks from, well just about everyone, and days of foot pain and fallen arches, and then once you've finally perfected the goosestep, there comes the kicker: you can't stop! Mastering the goosestep requires doing it until it becomes second nature -- getting your legs to do it without missing a single step, without even having to think about it. So, even after you've gotten it down, you tend to keep doing it.

I want you to imagine for a minute that you're walking through the park with your girlfriend. You've had a great date, and you're just about to find a way to tell her that you're a professional Hitler impersonator when she shrieks and shouts, "what are you doing?" You of course look down to find your legs swinging upward on unbent knees, toes pointing upward mocking you. What do you say? I'm serious. Sit down for five minutes and think about what the best thing to say would be. What did you come up with? I'll tell you what you came up with: nothing! I've been pondering this question for three years,and I can tell you that there is no good thing you can say when your girlfriend catches you goosestepping. Now imagine the worst thing you could say. Go ahead, think long and hard about what the worst thing you could possibly say is. That's what I said.