My grandparents, when I was a very small kid, always had a transparent glass jar of cookies on their kitchen counter. My grandparents did not care for cookies, mind you. The only reason they had these around is so we could have something fun to eat and they thought it gave us a reason to come see them more often. Never the same brand of cookie in this jar either... I'm talking Oreos, Fig Newtons, those peanut-shaped ones, the list doesn't stop.

One weekend we came to visit, and after a round of obligatory hugs my sister and I ran to the kitchen to see what kind of snacks we would be enjoying that day. The jar didn't disappoint, packed to the LID with Chips Ahoy. Obviously we couldn't reach the jar, so my grandmother would bring it down to kid-level for us and open the lid. To my surprise, there were two silver-wrapped York Peppermint Patties on top of the pile of cookies.

At that point, I had never had a Peppermint Patty, and despite the inviting, shiny silver wrapper, I was a little timid to try one. My grandmother could see the concern in our eyes, so she offered to split one between my sister and I and see if we liked it. I'm not sure if mint is just too complicated a flavor for kids, or we just weren't expecting to be trying something new that day, but we HATED it. I remember saying something like "Ewwwwww where did you get these? UGGGGH" and making it a complete shitshow.

My grandparents, with a heartbroken look, said they got them at dinner earlier that week. They must have been stacked on top of their check at a restaurant, and with their grandkids always on their mind, they thought we might like to have them. Didn't work out that way.

The remaining Peppermint Patty was dodged for years. Every visit, we found a fully stocked jar of cookies, and the mint slowly found its way to the bottom of the jar. It sat there for years. As I grew older, my visits became less and less frequent, but I still remembered seeing that patty down there. Soon after, we moved to another state, and I didn't come back to that house until my grandfather's funeral, over a decade later. He died less than a year after my grandmother.

You guessed it ... after more than ten years, I walked into that kitchen looking for a glass ... and tucked in the back of the cabinet was that glass cookie jar, and that Peppermint Patty was still there.

Now, I didn't cry at the funeral. As much as I missed them, I have always grieved on my own time. But I lost it when I saw that shiny wrapper. I imagined my grandfather all those years ago seeing those two Peppermint Patties on top of his dinner check, and thinking only of his grandkids and wanting to make them to be happy, and him sliding those two silver discs in his coat pocket to bring home for us. I thought what an ungrateful little fuck I was for not saying thank you and for making a scene when I tried the other one and it wasn't to my liking. I thought how depressing it was that this treat was essentially created for a very simple purpose ... for someone to enjoy. I thought about how terrible it was that purpose was unrealized, like a teddy bear no kid ever hugged.

I thought for a moment about grabbing that Patty, and either saving it for sentimental reasons, or just outright eating a fifteen-year-old piece of candy, but I ended up leaving it there. Shut the cabinet door and left it in the dark. That fucking Peppermint Patty is the saddest food.

And that did it. Your story managed to bring up a very similar, very painful memory and sense of guilt that I've suppressed for almost 20 years. Not food, but the first fucking toy my dad every bought me without my mom's help, and I HATED it. It was a Swamp Thing action figure, where you press a button on the back and it falls apart. It was a gimmick, but essentially unusable as an opposable action figure. I hated it more than anything I had hated up to that point. He takes a day out of his work to take me for "father-son time," takes me to Children's Palace at the end of the day, takes time to show me how to use the thing ... and I repay him with hatred of his act and accusations that he's not as good as mom is. What a piece of shit I am. What a shitty son.

I fucking hate you Nermal. 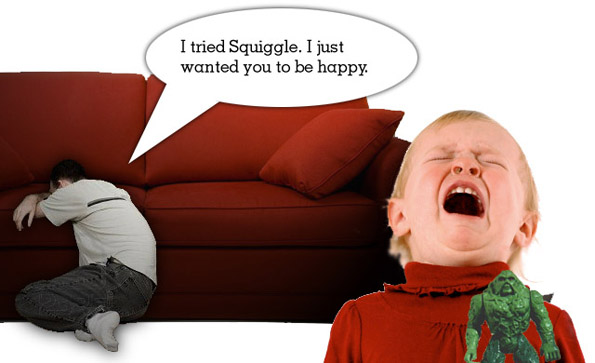