hahah - Oh, hello. You know, we love to laugh here at Comedy Goldmine, but every once in a while we give the humorists a break in order to showcase the SA Goons' noteworthy accomplishments in other fields, such as a story about a dog-faced demigod composed of spliced-together clips from a reading of President Obama's autobiography or an impressive comic about a bird. Like the latter, "Interview with Samus Aran" hails from SA's literary testing ground Creative Convention. Froglight submitted a promising introduction; forums laureate emeritus Haoma checked in with praise and a few quickly assuaged concerns; and then the narrative took off in amazing directions! it's still ongoing after 34 updates; you can follow its progress on the SA Forums and/or check out future installments here, provided that this one's a big hit with the readers. Thanks to g0m for the images!

This is an interview with Samus Aran, the famous freebooter who has openly fought for both sides in the ongoing Kerian war on a battle-by-battle basis. 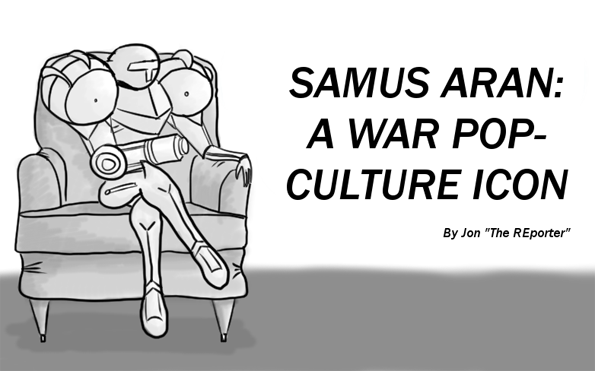 The Kerian Rebellion has been raging for 39 years. It is officially the longest-running war of all time. Most of the soldiers who fought in its first battle are dead, and in some cases there are third-generation soldiers fighting for a war they were born into. John Presley III is a Confederate Marine currently in training to become a Light Armored Vehicle Mechanic. His father was a Scout Sniper with the Confederate Marauders, and his father was among the first galactic marines to perish during the rebellion's initial station bombings.

Every time Samus Aran lands on a planet, any planet, she runs the risk of being apprehended and arrested for one of a few dozen crimes, although her status as a neo-folk hero causes most outer-rim planetary police to turn a blind eye. Her existence and success as a 'pure mercenary' fighting for both sides has actually been turning the long and bloody rebellion into what many citizens on both sides would call a circus. There are even a few optimistic worshipers who hope that her 'antics' can take the sails out of this war for good. An anonymous military source is quoted as saying: "Aran jumps from side to side winning battles and getting paid insane amounts of credits. If she is good, she could run this war into the ground. If she is smart, she could ride it into the sky."

Her suit and her ship continue to be sought after by both the Kerian State and the Confederacy. For her part, she seems to have unwavering loyalty to the highest bidder. She fights periodically for either side, and so far she has spent an almost equal amount of time fighting for both. She has fought on planetary soil. She has boarded military space stations. She has fought in the black of space. Now she comes to you courtesy of the IZZA Network.

"Hello Ms. Aran. You may know that my last interview was with General Tarmun, of the Confederacy. That interview was what made me want to make you the subject of my next interview. He said you were the coldest person he ever worked with. He said you killed people like you were mopping a floor; like it didn't mean anything to you; like you were just working and waiting to go home. As a lifelong and highly decorated soldier, he seemed a bit disturbed by you. What do you think about that?"

She seemed only slightly annoyed with the question.

"We boarded a ship together." She said, almost defensively. "I was in my suit... He really said that?"

"He did. He said you ripped someone in half when you just as easily could have blasted him. It seemed to be a memory that affected his opinion of you."

"Everyone has a reputation for being one way or another, I guess."

She was silent for a moment and then said "You know, I once spent an entire summer applying for waitress positions on the old station. They all wanted me to have experience, but I had no idea how I was supposed to get experience if I couldn't get a job in the first place."

"It's funny that you mention that."

"Trying to get a normal job."

"Well, I'm sure you could guess my team and I looked up on you as much as we could before this interview."

"[laughs] Well you are completely black-flagged in ever single employment and government database in existence. In fact, both of the sides you fight for have you marked for non-employment with keywords that include, but are not limited to: Mercenary traitor murderer rebel mutineer deserter pirate taxdodger smuggler terrorist thief embezzler criminal hostager felon noncitizen"

"Like I said, I couldn't get that waitress job. Is hostager really a word?"

"Honestly, though, tell me how you got where you are now. The last your records show you are a 14th grade runaway at the age of 15. We know you were raised at a temple as a war orphan, we can see all of your grades; mostly good, a few bad. No developmental problems filed, no behavioral medications administered. You could have filed for scholarships to any of the high-level station-schools, but you didn't even try. You disappeared one week after a murder took place two streets away from your temple. I'm hardly the first to put two and two together; the local police still have you listed as the primary suspect in that murder, and if you were to land on your homeworld today, armor and fame and all, the police would still be obligated to apprehend you."

"Like I said again, I couldn't get the waitress job. The government sure as hell wouldn't hire a human, I couldn't even join the military. I wish I could say I was simply taking an opportunity that presented itself, but that isn't true. I could have stayed at the temple and worked, I would have survived, but I didn't want to just survive, and I sure as hell didn't want to stay at the temple. I'm thankful everyday that one day when I was 11 a man offered me 20 credits to watch for the police outside an apartment building. I'm thankful that same man later offered me money to store his packages at the temple. I was valuable for the first time, a little orphan girl with a scarred face in temple robes. No peacekeeper with half a heart would ever bother me. It was my first honest relationship, they took advantage of me and I took advantage of them." 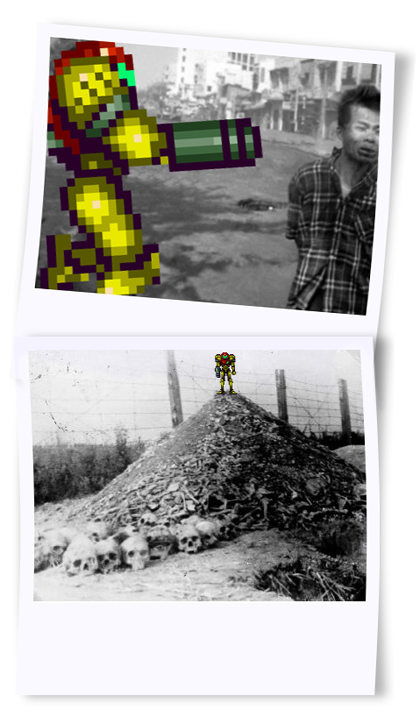 "So you were a criminal?"

"So I found work. Who the hell was I to think of illegality? It was a miracle just to find people who were willing to pay me for anything. They earned my undying loyalty the first time they gave me enough money to buy more than food. It was more than anyone else ever did for me."

"But part of your value to them was your position as a temple orphan."

"Exactly, and I only had another year of that."

"So if you wanted to stay in the fold you would have to prove your worth otherwise."

"Well, I was already a good worker. I already had friends. At that point I didn't think they would just ditch me, but my impending maturity instilled in me a sense of ambition, and I wanted to do more."

"And nothing was off limits?"

Samus rolled her eyes, "You're getting ahead of yourself. I know you probably came into this interview with my story ninety percent written in your head, like I just agreed to beat some junkie to death with a rock for my ship and suit, but just listen. At this point I'm 15, about 9 months from maturity and independence. I spent my days tutoring younger girls and applying for waitress jobs, and I spent my nights sneaking out and meeting my handler, exchanging or holding packages, giving away temple medical supplies and food, or patching up 2-day-old infected bullet wounds as best I could with my medical training."

Wow. At first, when I came into this thread, I was feeling especially magnanimous and was going to do some free line editing (I was an English major in college) but it quickly became apparent to me that it would be like over-sharpening an already sharp as heck sword. This is definitely the work of a person in charge of his craft.

The subject matter is engaging (who DOESN'T love Samus Aran? Classic Nintendo video game protagonist? Check. Extremely hot babe? Check. Not a top tier SSB:M character but powerful enough under the control of a skilled player), the pacing is excellent, and the dialogue, impeccable.

This has publishable written all over it. I particularly enjoyed the part about her characteristics, and the characteristics of her suit and her ship. It practically jumped off the page. I was in heaven already, and then she spoke!

Simple. Elegant. No frills or bells or whistles like they like to do in some books. It's just the type of thing a badass freebooter would say at the beginning of an interview. I enjoyed the reference to the past interview and how that interview, the past one, influenced to course of the current interview. This is the type of backstory that can really add depth to a piece. You know there's a cause and effect going on here. This isn't just exposition for exposition's sake. Exquisite.

She seemed only slightly annoyed with the question.

Again, great imagery. I can just feel the slight annoyance radiate from Samus Aran in this passage. The following back-and-forth about getting a normal job is brilliant. It's out of the blue and seemingly contrary to the whole space pirate theme but, for some reason, it fits perfectly! Samus Aran trying to become a waitress! Love it! Getting a normal job is something most readers can relate to. It humanizes her. You can relate to it. I know I can.

From that point on the piece is more or less a tour-de-force. The tension that began building up with the intro pretty much doesn't fairly fucking let up and the climax of the piece leaves me wondering: What is next for Samus Aran, the classic Nintendo character brought down to our mortal realm vis-a-vis this excellent short piece of yours I can find absolutely nothing wrong with?

I know this is REALLY nitpicking but:

The Kerian Rebellion has been raging for 39 years. It is officially the longest running war of all time.

The Hundred Years War, for example, lasted 116 years, far longer than the 39 of the Kerian Rebellion. I understand the universe of your piece might be only tangentially related to our own (I'm NOT an expert on NES, SNES, n64, Gamecube, Wii, or Wii U gaming lore... does Metroid take place in our universe??) but surely there has been, even in a fictional or parallel Metroid universe, a war that has lasted longer than 39 years?

Again, I know I'm nitpicking. The purpose of this forum is for criticisms and I hope you don't take too much offense, but it's really the only semi-unbelievable part of your story.

Make it 139 and your narrative is airtight. Cheers.

For accounting purposes most scholars in fact count the three phases as three separate but related wars. I did the math and even the Lancastrian War (1415-53) only amounted to 38 years, one year shorter than your Kerian Rebellion.

"Oh ye of so little faith!"

I apologize for doubting the veracity of events in your story and humbly retract my previous criticism. It looks like you've done your research. Carry on.