REVIEW: the hottest viral images of the day 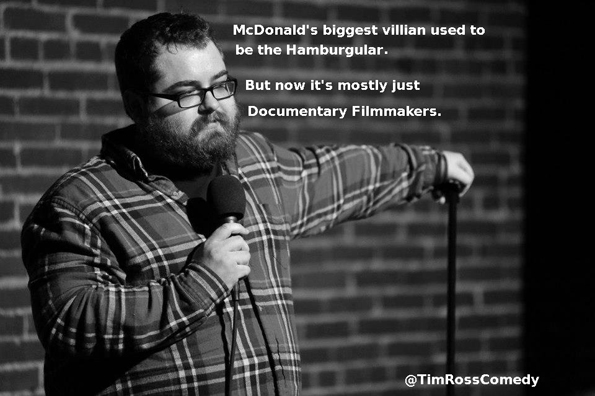 hair: neatly trimmed, with enough playful messiness to compliment the humour of his act. beard is pretty untidy but i think he's fat enough to get away with that. not a big fan of moustaches that go over lips but to each their own.

CLOTHING: Lots of sort of plaid like, interlinking lines and squares. draws the eye in every direction at once which is good. Same pattern as the bricks behind him. unbuttoned collar betrays an inherent slovenly nature

Body and posture: not sure what he's trying to accomplish with his hand on the mic stand... possible that he's trying to affect a casual lean without any knowledge of why people lean or what being casual looks like. Poor mic technique unless he lowered it so the photo could be taken with his head in frame. His shirt looks really uncomfortable around his right arm.

twitter link: valid twitter username. attention grabbing without obscuring any of the joke or pic of the comedian. I went to the twitter page and searched in page for "white" and got 9 results. It's deece.