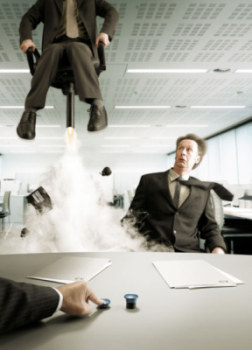 I've been working at the same company for well over four years now, and well through out that time many of a prank have been pulled, but one stands above all others. So much so that we aren't even allowed to talk about it.

I have a boss named, "Pat", Pat can be a real prick but overall isn't that bad of a boss. But one thing he loves to do is to come into people's offices and fart, and I'm not talking about a cute little squeaker, no, fuck that. Its the most offensive smell one can possibly imagine.

So I decided to teach him a lesson by going to one of the local Mexican restaurants and ordering the largest plate of nachos I have ever seen. I ate as much as I could but there was still around a pound of food still on the plate.

I take the food back to the office and proceed to microwave it for 30 minutes. I then place said nachos under my boss' desk. Well here is the funny thing, he had a cold and couldn't smell shit for well over two weeks. SO for two weeks I took those fucking nachos and nuked them for 30 minutes a day, occasionally throwing cream cheese or more random meat on top of it.

Well finally after another week Pat regained his ability to smell. What I didn't know at the time was his dog had died, and he fucking LOVED that dog, hell he used to bring it into the office so he could be with him all day. Well long story short the dog's ashes were on Pat's desk.

This is where the prank went horribly wrong.

I walk into Pat's office and I find him smelling his dead dog's ashes, crying.

My co-worker who knew about the prank finally said that was enough, and removed those rank, putrid, rancid nachos out of his office.

Well to say the least Pat wanted to hammer my face in.

I made my boss think his dead dog was stinking up his office.

Done to me, not the other way around.

I was on an archaeological dig in Spain this past summer. We had two trenches open, and the one I was in had pretty much run dry. Cue about six straight hours of digging with absolutely no yield. Meanwhile, the other trench was finding literal bucket-loads of stuff. Balls.

We decided to go down another couple feet. I picked and shovelled, so I made the two guys I was digging with scratch and brush the first layer while I sifted their dirt. I picked up one bucket and poured it in my screen expecting nothing more interesting than some rocks when I saw something greenish-bronze glinting at me.

Breathless, I pulled it out...and screamed. It was a gorgeous little figurine, apparently made of bronze, heavy as fuck and barely tarnished at all. Me and the other kid were freaking out so much that we scared the other trench. It was, undoubtedly, the greatest find anyone had made so far. We proudly showed it to all our Spanish team-mates, who seemed suitably excited. It almost made waking up at 4 AM every day seem worthwhile.

It wasn't until two hours later when our third team member (and supervisor) admitted that he had planted it in the bucket and that it was a crappy reproduction. We were heartbroken...until we did the same thing to the people in the second trench.

I didn't pull this prank but it's the stuff of legend around my office, this instance of it in particular. Before we got bought out and we were still small my (engineering software) company's tech support department used to have an initiation ritual called the "call from hell" that would target new employees around the end of their first week.

So right at the end of the day on a Friday the new guy is on the phone with a "customer" (actually a former employee in on the prank) who is requesting support on a really old product that nobody in tech really knows how to support anymore and no customers really use anymore. The guy is trying his best but the "customer" is pretending to be really frustrated and complaining a lot. Then the #2 in command guy in the company puts death metal on the loudspeaker in the support room and comes in headbanging and playing air guitar (and he is very white collar and well into his 40s so it's all the more hilarious).

The new guy gets this panicked look on his face and asks the VP what he was doing, "I'm on the phone with a client, could you please turn the music off?" etc. VP asks what product the customer is asking about. "DamBreak." "DamBreak? Are you fuckin' serious? Lemme talk to this idiot!"

So the new guy hands the phone off to the VP, who starts going crazy on the "customer." "What the fuck are you still using DamBreak for??? Don't be callin' my guys about this shit, quit wasting our time, asshole!" New guy is all as the VP hangs up on the customer.

Later on the new guy sneaks off to a quiet back room and calls the "customer" back apologizing profusely, saying he had no idea what was going on with the VP and offering to help again. VP busts in mid-call again and orders the new guy to hang up on the customer and starts basically yelling at him for helping the guy. Finally after the support guy hung up the VP let the new guy know it was just a joke and he was talking to a shill.

New guy is so freaked out that he's actually shaking and trembling. VP tells him to grab a beer out of the fridge and relax, good first week rookie. The guy just sat there in a catatonic state for about 10 minutes sipping the beer and staring off into space

After all of that hilarity, I'm all pranked out. At a later date I might return to this topic for a future Comedy Goldmine, so it's not too late to contribute your own tales of causing unspeakable harm to your "friends" at work by visiting this thread on the Awful Forums. Thanks go to the usual batch of forum goons who are always ready to share their stories, because without them this article wouldn't be possible and I would have to upload a bunch of crappy clipart to use as content. Join me next Tuesday for another Comedy Goldmine, featuring a bunch of crappy clipart.