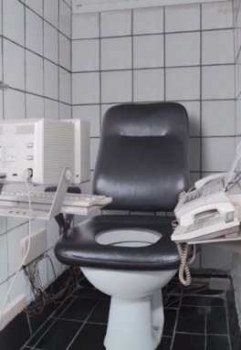 Sadly, I'm the office prankster where I work. My buddy went on vacation to Disney Land, and spent weeks rubbing in the fact that he would be gone during a particularly busy week, So I taped his cubical space shut with newspaper, and decided to fill it with balloons. Because Styrofoam peanuts were too overdone, and ping pong balls were too expensive. 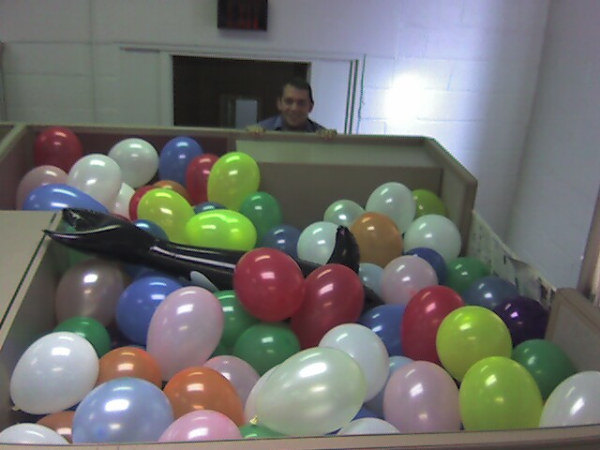 Yes, that's a ride-on inflatable killer whale from the dollar store. The whale actually rode down the falling balloons and past my friend when he pulled the newspaper. Also, our cube walls are 7 feet high. That's close to 700 balloons in there.

My sister and I worked at a theatre a few years back. My sister was about to take over as projections manager since the current manager was leaving for university. His last night of work was around the same time as one of those insanely long movies like Lord of the Rings or something 3 hours + in runtime had recently opened.

My sister and several co-workers had been saving up old trailers for some time, and in their spare time that night had constructed them all together into one long reel approximately the same size as the entire Lord of the Rings print.

At closing time, as they moved prints between projectors for the next day's shows, I lured the retiring manager into the main lobby. Two co-workers brought out their gigantic fake Lord of the Rings print, and as they passed in front of us, tripped and dropped the film everywhere. One co-worker played it up, frantically flailing with the print as it uncoiled and tangled everywhere, picking up sections and attempting to toss it back on the platter, and really making a terrible situation worse.

The manager stood and just stared, floored, and finally started to stammer "Stop...Just...just stop" to the co-worker throwing the film around. It takes DAYS to splice up a dropped print and reconstitute it, and thousands of dollars to pay for ruined prints, so that poor guy was about ready to go cry in the corner before we all broke down laughing and let him in on the fact that it was a fake print. He was more relieved than amused.

We installed some kind of remote administration tool on one of the sales guy's machine. For weeks, we'd randomly press the "k" key while he was writing an e-mail. Only once or twice at a time, just enough to irritate him while he was trying to get work done.

Eventually, he came back to us and asked us to replace his keyboard, since it must be broken. We gave him a new keyboard, and started pressing the "d" key instead.

There were three of us "in" on the whole deal, and this made it really difficult for him to figure out who was screwing with him (by this point, he'd figured that someone must be actively doing it to him). Since we coordinated it such that all three of us had been standing next to him at one point or another while the keys were repeating, he didn't figure it out until he happened to walk over to one of our cubes and saw us looking at his desktop.

I once worked at a company that did metal fabrication. Some of the work involved welding long pieces of steel together. If a guy was going down a line like this a good trick was to put a firecracker ahead of where he was welding. With his hood on, he wouldn't know the firecracker was there until he'd gone over it with his welder.