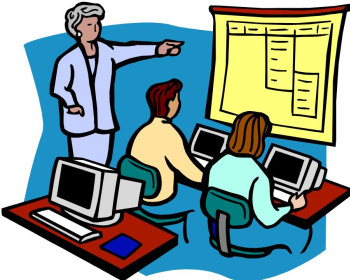 I use to work at Best Buy in high school, and if you have ever been to one, I'm sure you've seen the "Big Joe" (the yellow forklift/platform thing that employees use to get merchandise off the top shelves) Hanging above the employees head is a belt attached to a rope that is suppose to catch you if you fall off the platform. In order to operate Big Joe you need to pass a safety test, which include raising yourself about 20 feet into the air, in order to see if you can handle the heights.

I had to teach a kid in the Appliance Department how to use the forklift thingy, and the running joke at the store was to tell the new kids that they had to jump off the platform to help them "build trust in the safety belt." Usually we would turn off the power and leave the kid up there for 5 minutes and walk away, only to return and say "Har! Har! Just kidding bro!" Well the kid i was training was so uptight and anal about keeping his first job, he ended up jumping. When I came back around to check on him, he was dangling in the air, crying with a HUGE wet spot on his khakis.

All of the managers played the same trick on the new kids, so I wasn't fired, but I still can't shake the guilt.

I plugged an extra mouse on an extra long cable to my old boss' computer and ran the cord under my desk so the mouse was sitting on the floor next to my feet. A couple times a day I'd give it a gentle kick and hear him muttering to himself about his "crazy computer". The sad thing was that he ran IT for the company and he never once found it until after I quit.

Kitchens are great for pranking. We've soaked and frozen people's street clothes so they're have to go home in their grimy whites. We told one kid that he needed to whisk a bowl of water to bring out the flavour of the minerals. He whisked that water until his arm was about to fall off and we kept saying "Just a few more minutes, you'll see.". When he wasn't looking, someone slipped in a handful of salt, and we let the kid keep going for a few more minutes before telling him to taste it.

They put a fence up around the back part of our building. No one from my area knew why though... it was just some random fence. (We found out weeks later it was just for a construction area.) I was joking around with my co-workers that it was going to be used to hold animals for experimentation, so I printed out some signs in big red letters that said:

People noticed them right away and started referring to the area as the "Tiger Pit." It got even funnier when the construction company put up those big black privacy tarps behind the fence and left the signs up. Every day for weeks I would go walk out to my car and see some chump trying to peek through the tarps to get a glimpse of the tigers.

I work at an aquarium, so we get to do all sorts of stupid stuff like this.

Putting feeder guppies in peoples' drinks is pretty much standard fare for the new guys/dicks/pretty much any-one. Liberally cutting any and all food in the fridge with flake food/GarlicGuard/molybdenum is also common enough.

We do 'dead runs'- goin' around grabbing all the sick or dead fish in tanks. There can be a lot- at the end of the day we've probably got a sandwich baggie full of fish corpses. We'll leave them in peoples' pockets instead, or put all of them into one tank and tell someone that EW-23 has got a dead gourami or two in it. Someone put a crayfish in our bosses' pocket. Dunno if he ever found out who.