EXPECTATIONS: Anytime I hear someone complaining about how Twilight ruined vampires and how "vampires act so emo now, that's not how vampires really are.", I am quick to point out that A) vampires have been whiny, sexually frustrated, needy assholes since Bram Stoker, and B) vampires can act pretty much however you want them to, because vampires aren't real. There's no "right or wrong" way to write a vampire, you just hate that they have become a thing that girls like. (Hint: They always were.) This is why I am excited to see Jim Jarmusch's take on the Byronic concept, as his calling card seems to be the melancholic, philosophical, and slightly pretentious side of anything popular or cool.

REALITY: Honestly, I can forgive a writer for making vampires into mopey creatures of ennui. I get bored and cranky on a Sunday afternoon with nothing to do, I imagine that eternal life in darkness probably gets a little frustrating after a few hundred millennia. Imagine having to watch all of human discovery and evolution, just to reach the point where we all yell "YOLO!" at each other, and your response is "I know, goddammit, and it won't end." 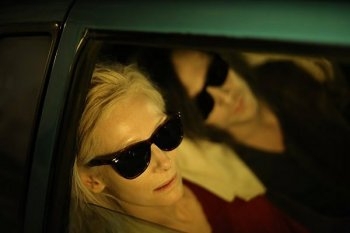 The sleepiest vampires.This is what we arrive at with Only Lovers Left Alive, the story of eternal vampire lovers Adam (Tom Hiddleston) and Eve (Tilda Swinton), who are reunited when Eve visits Adam in his home in Detroit to pull him out of his depression. (Presumably because he lives in Detroit.) There's really not much in the way of a traditional story here, more just a series of scenes contrasting their two approaches to immortal life. At one point they are disrupted by the appearance of Eve's hellion sister Ava (Mia Wasikowska), whose brash actions force the two to return quickly to Eve's home in Morocco, but that's basically all the plot there is to sum up.

However, while Jarmusch isn't much bothered with plot, he makes up for it over atmosphere and setting. The dilapidated decline of Detroit serves as the perfect backdrop for Adam's mood and desire to be left alone. Adam constantly whines about humans' (or "zombies," as he calls them) systematic rejection of art, science, and culture, so it makes perfect sense that he would surround himself with a city famous for having all of those things and now being a punchline at best and a third-world hellhole at worst. Eve on the other hand settles in Tangier, a lively city filled with people and activity. However, it's made quite clear that Adam could have all of this in Detroit, he just chooses not to. More important, however, is the score by first-time composer Jozef van Wissem. The music effortlessly switches from crisp sitar and middle-eastern influenced themes to screechy glam-punk filled with wails of feedback. Hiddleston and Swinton are great, but this music is really where the film draws its intentional coolness from.

This sense of capital-C cool is what I find most interesting about Jarmusch's take on the vampire mythos. According to him, vampires are tragically cool figures, Lou Reed-level addicts, with all the broken beauty we associate with mentally-unstable artists and musicians. Vampires are junkies here, we pity them and also kind of want to be them. The casting certainly helps, because if you go to your bathroom mirror and say "Junkie Vampire" three times loudly, Tom Hiddleston and Tilda Swinton appear behind you.

Jarmusch's plot-light mood-heavy approach is not really going to be for everyone, and that's fine. It most definitely feels stretched out to over two hours, and there's only so much brooding-Hiddleston a man can take. However, there's a good chance that the people this film does strike a chord with will love it entirely, it has the potential for long-standing cult appeal. So I guess what I'm saying here is, if the idea of seeing Tilda Swinton and Tom Hiddleston's moon-white flesh lying next to each other multiple times is appealing to you, then hey, you're the kind of person this movie is made for.

MINORITY REPORT: I know we just had a remake of District B13 this week, but now I want another one starring a bunch of brooding vampires that hate how easy it is for them to do parkour. - Joseph "Jay Dub" Wade