REALITY: Here's a tip for aspiring filmmakers: Don't include violence against pregnant women unless you're going to build a whole movie around that (as in Inside). I know that's a weird thing to write, and I don't know why I have to write it, but Favor is the second movie I've seen this weekend (the other being Proxy) to include such violence. I've never been pregnant, and I'm not wholly opposed to any specific kind of violence if it's presented in the right context - hell, Inside ranks high on my list of favorite horror flicks - but, as one of those big taboos, violence against pregnant women is a surefire way to lose your audience, especially if it comes, quite randomly, after 80 minutes of darkly comic Coenesque antics. There's the good kind of thing the audience is not expecting, and then there's a pregnant woman getting shot in the uterus. It's a little off-putting. 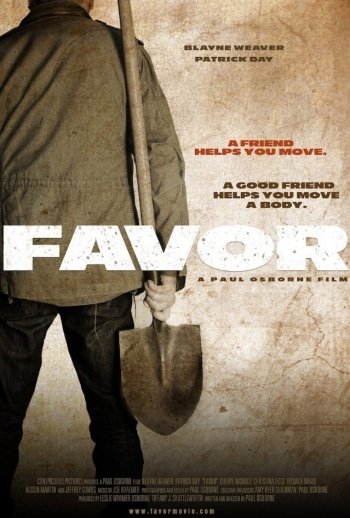 Who wouldn't watch this?That's not to say Favor, which beats its head against a low budget and a screenplay that grows more amateurish as the film rolls on, is a great movie otherwise. This is no Blood Simple. But, on strictly a narrative level, it's a nifty reinvention of Strangers on a Train: Well-to-do ad exec Kip (Blayne Weaver) accidentally kills his mistress in a seedy motel room and calls on a childhood friend, the not-so-well-to-do Marvin (Ernest Goes to Camp's Patrick Day), to help him with the cleanup. Marvin happily complies. Unfortunately for Kip, Marvin sees this as an invitation to reinsert himself in his estranged friend's life. Soon, he's showing up on Kip's porch, much to the chagrin of Kip's wife Claire (Cheryl Nicols), and showing up at Kip's office to demand favors from Kip: a $5,000 loan, a blind date with one of Claire's friends, a job at the agency, etc. Meanwhile, Jeffrey Combs receives third-billing as the agency's owner, who appears in, like, two scenes.

Thanks to Day, who brings a little Louis C.K. to his role as a guy who oscillates between "sympathetic loser who just wants to be liked" and "loser who has no sense of boundaries or propriety," it's during this portion of the film that Favor really shines. The other actors can't keep up, but Day grounds the movie as a comic thriller that explores both post-recession class divisions and the gulfs that grow between former friends. While Favor never elaborates on that last point, Kip and Marvin are estranged because a) Kip's too successful, b) Kip's too big of an asshole or c) both. Favor owes much of its energy to the impossible positions in which we find Marvin, who blackmails a shitty friend to better his standing, and Kip, who risks going to prison if he tells Marvin no, a position with which we can sympathize even if the film exists to skewer philandering, cocksure guys like Kip. What's the comeuppance for using people? A friend who won't go away when asked and pretends to be far dumber than he is. For a while, we're not even sure if Marvin realizes he's blackmailing Kip.

Then Marvin snaps, and Favor unravels after a jarring tonal shift. Something has to give in any impossible situation, but writer/director Paul Osborne can't deliver a fitting resolution. The ending works, I guess, if you don't think too hard about it - especially if you can forget that the whole movie started with Kip killing his mistress - but none of it is particularly satisfying, thanks in part to Alison Martin's unconvincing turn as a tough-as-nails cop who is forced to say things like "man-sausage" (why is it that detectives in low-budget features are so poorly written and acted?) and thanks, again, to the aforementioned assault on a pregnant woman, which feels entirely out of place and strictly in keeping with the screenplay's needs. "How can we move this plot along? Hey, I know: Let's kill a fetus! That'll get things cooking!"