REALITY: I could say I'm loving it, but honestly, I'm not. Morgan, I gave you a chance, because you're worth it. If you want to bring good things to life, then just do it! Did you expect me to stand up in my theater and yell "This changes everything! Again!" Give me a break. Alright, buddy, have it your way. Just please don't squeeze the Charmin. 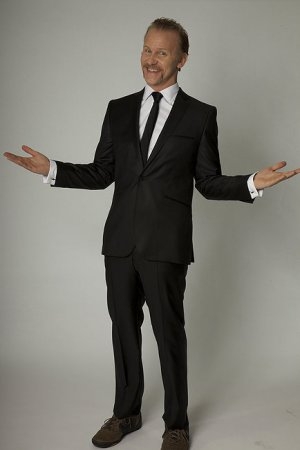 Too bad you're such a disproportionate freak, Morgan.Wow, okay. That was terrible. I'm sorry I did that to you guys. But it made a good point. The point is: "Advertising is everywhere." I made that point in one terrible paragraph. Morgan Spurlock makes it in one pretty funny documentary. I'm not sure which one of us wins here. Spurlock is most famous for eating nothing but McDonald's for thirty days for his film Super Size Me, and this time he's using his stunt-doc style to take on the world of advertising and cross-promoting in film. Because no one is more self-aware than Morgan Spurlock and his Yosemite Sam mustache, the film is paid for entirely by cross-promotion and sponsorship. Spurlock documents himself going to various companies and ad agencies and pitching his film, and once he gains sponsors, he shills their products right in the middle of the movie. But he does it ironically, so that's okay, I guess.

I like Spurlock as a writer and a filmmaker. Greatest Movie is funny, interesting and entertaining. Spurlock's Everyman personality (which the movie points out is part of his "brand identity") makes him endearing and fun to watch as he jokes his way through the long and tiring process of incorporating advertising into his film. One of the best bits in the film involves Spurlock going through a department store, looking for products he wants to feature. When he stumbles across the ridiculous horse/human shampoo hybrid Mane N' Tail, he starts giggling like an idiot, begging "PLEASE can we have Mane N'Tail be our sponsor?" This is when I realized Spurlock's greatest strength is also his greatest weakness: He is a goon.

The problem with Spulock's films is that they don't bring anything new to the table. They just reinforce things that we already know. "Fast food is bad for you." "Advertising is annoying." "We can't find Osama bin Laden." (How's that last one working for you, Morgan?) Spurlock raises some interesting points, then does nothing with them. I'm sure most of the audience doesn't realize the level of commitment that advertisers are willing to go through to make us buy their crap, to the point of making full-brain scans of people watching commercials. Morgan tries to complain that his contractual obligations are hindering him from making the film he wants, but when the film you want to make is about contracts, I just don't know what to tell you, man. After 90 minutes of film, Spurlock doesn't really manage to say anything about advertising other than it exists. 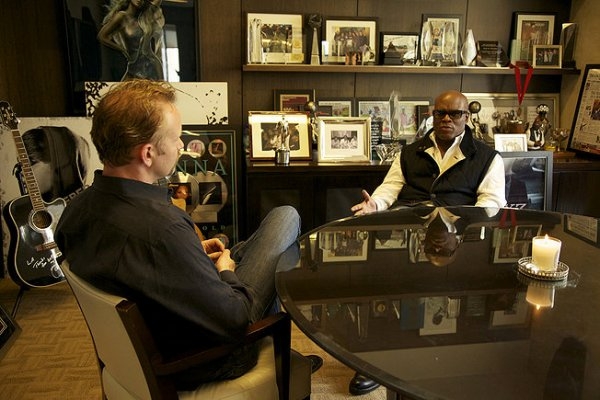 A caption can say nothing that the look on that guy's face doesn't already say.

Maybe that's not necessarily a bad quality in a documentary. He provides the information, we decide what to do with it. However, at least with Super Size Me, we could decide not to eat fast food. With this, I'm not really sure what he expects us to do. Maybe nothing. Maybe he just wants us to sit and watch him be funny for 90 minutes, which he certainly is. It takes a lot of balls to try to sell shoes to Ralph Nader on camera. I guess it's a testament to Spurlock's filmmaking that I found myself not listening to world-renowned Smart Person Noam Chomsky because I was staring at the Pom Wonderful bottle on the table, but would I have noticed if they hadn't already told me to look for it? Who knows? Who cares? What I do know is that in a sequence where he talks to a bunch of filmmakers about licensing their movies, Spurlock gets Brett Ratner to look directly into the camera and say "Artistic integrity? Pfft, whatever", which is yet another example of Spurlock confirming what we've all known for years.

Spurlock has put me in a unique position here. By whoring himself out to all these products in the film, I am almost whoring myself out, by proxy, if I recommend this movie. By saying you should see this film, I am throwing my support behind Pom Wonderful, Jet Blue, and all the film's other sponsors. It's difficult to do that and maintain integrity as a critic. Fortunately, that pomegranate juice is fucking delicious.

*Editor's Note: It's funny because it's true.

MINORITY REPORTS: So, Morgan Spurlock is his own biggest disciple, and he goes around begging corporations for thirty pieces of silver in exchange for selling out his latest movie? And then a bunch of the corporations flog him and tell him to go fuck himself? How is this movie not about Jesus? - Joseph "Irish Jackbutt" Wade

You forgot to mention that this review was brought to the readers by Something Awful dot com. Buy a forums account and become the envy of the internet. - Ian "Envy of the Internet" Maddison