The ABCs of Death

EXPECTATIONS: While Bullet to the Head is the latest manifestation of an action-movie renaissance at the multiplexes, films like Trick 'r Treat and V/H/S are leading a renaissance of their own, albeit a quieter one more suited to festivals, midnight screenings and VOD: They're resurrecting the anthology horror film. And with those films finding small but dedicated audiences, horror directors are collaborating on some innovative riffs on the format: V/H/S uses the language of found-footage and anthology horror to comment on the horror genre's stale trappings. It's no wonder The ABCs of Death, a collection of 26 short horror films by different directors, comes to VOD courtesy of the same distributor as V/H/S. Based on T for Toilet, The ABCs of Death should occupy the same space as its antecedents. At least the concept of building short films on this foundation, exploring strange causes of death, is novel.

REALITY: It's difficult, difficult -- lemon difficult -- to review a film that is, quite literally, nothing more than 26 short films, most of which clock in at around five minutes, smashed together. The ABCs of Death lacks even a framing narrative. After two short intertitles explain the general concept and insist that contributing directors were given complete artistic freedom (and, going by one segment, $5,000), alphabet blocks bob in a pool of blood until they spell out the title and then we're thrust into A Is for _____.

This lack of connective tissue between the shorts hurts The ABCs of Death more than I would've expected. Compared to V/H/S, in which the subject matter differed but each short served a larger goal, The ABCs of Death is all over the map. While the majority of the directors submit ironic shorts built around gallows humor, a few of the directors decided they were going to venture into "truly disturbing" territory, ensuring The ABCs of Death would never become the kind of fun-time movie the superior shorts want it to be. If the directors had collaborated or aimed for a specific tone, this film might've been prime Halloween-night entertainment. As it is, watching it with a group is guaranteed discomfort and watching it alone will leave you feeling kind of icky, especially during L Is for _____, which depicts child rape almost as explicitly as A Serbian Film did.

I guess the best way to approach a film like this is to review the segments individually, but before I do, a quick preface: I'm partially obscuring the titles of the segments because those titles are spoilers in themselves. Part of the fun, when there's fun to be had, is guessing the cause of death based on the letter, and a few of the directors find clever ways to play with those expectations, so for maximum enjoyment of The ABCs of Death, you probably shouldn't go hunting for those titles. Furthermore, you should probably avoid its IMDb page, considering they repeatedly list each title in the cast and crew credits. But, without further adieu... 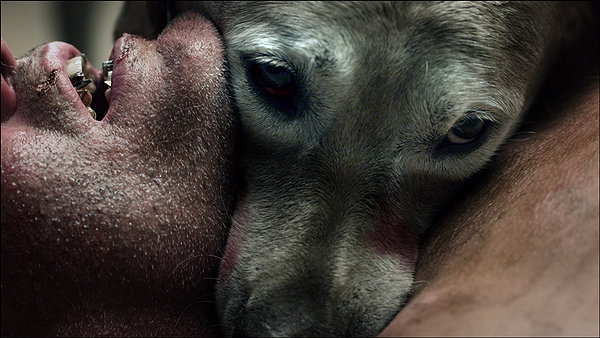 Guess which letter this one is.


A IS FOR _____: Nacho Vigolando's segment begins The ABCs of Death on a high note, as A Is for _____ swiftly accelerates through tones on its way to a pretty haunting ending. Only after the title is revealed do we understand fully what transpired here. That makes sense because Timecrimes was a mindfuck and so is this film, albeit in a entirely different way. 7/10

B IS FOR _____: While this one doesn't quite work, the first couple of minutes are entertaining as two teenagers learn the price of telling a child bogeyman fables. And, no, the B doesn't stand for "bogeyman." 5/10

C IS FOR _____: Another segment, another half-baked idea. Unfortunately, it lacks even a solid beginning to set things in motion. 1/10

D IS FOR _____: This one's trippy and stylish and a good argument that Deadgirl director Marcel Sarmiento has a bright future. You'll probably be able to guess what the D stands for pretty quickly, but the ending is quite unexpected and rewarding. 8/10

G IS FOR _____: Short, sweet and incomprehensible, like the majority of this anthology. 6/10

H IS FOR _____: This is the best of the shorts that reveal their titles as punchlines, and it's a damn good one, even if it involves furries, stripping, Nazis and unsubtitled yelling in German. Again, this is pure nonsense that just happens to be entertaining. 8/10

I IS FOR _____: And this is the first short designed as a piece of provocation, courtesy of director Jorge Michael Grau. While I respect his intentions, to publicize the disproportionately high number of female murder victims in Mexico, this piece's placement within the larger anthology -- positioned, as it is, after a string of shorts that draw on absurdist traditions for inspiration -- unintentionally trivializes that problem. Call me crazy, but it's especially hard to watch a woman get tortured in a bathtub after a bulldog with aviator goggles and a cigar managed to turn the tables on a strip-dancing Nazi catwoman in H Is for _____. 4/10

K IS FOR _____: Yes, a high point of this anthology horror film is a traditionally animated skit in which a woman battles a turd that doesn't want to get flushed. Wanna fight about it? 9/10

M IS FOR _____: This one's lacking the kind of creeping dread director Ti West is known for since The House of the Devil and The Innkeepers -- which would be fine, if it weren't also lacking everything else. 2/10

O IS FOR _____: Based on the sexual content, fetishism and the strobing lights, you'd think Gaspar Noe was behind this one. And you'd be wrong -- but, hey, this is most definitely the French segment. 5/10 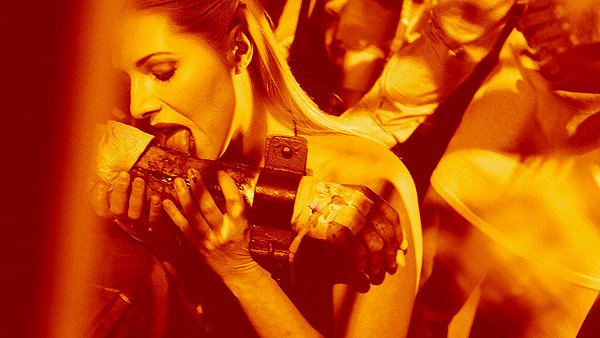 There aren't many images from this film that aren't really fucking weird.


P IS FOR _____: This is social-realist horror, but I'm not sure if the tone of director Simon Rumley's contribution matches its ironic title. 6/10

Q IS FOR _____: And this is where it gets meta, as director Adam Wingard makes a short film about making a short film. He whines about getting assigned the most difficult letter before he and his writing partner, Simon Barrett, decide how they can make their segment stand apart from the rest. And, yeah, it's pretty brilliant. 9/10

R IS FOR _____: Oh, joy: A new movie from the Srdjan Spasojevic, the director of A Serbian Film. While this one's pretty twisted, it's surprising just how tame it feels after L Is for _____. As disturbing as A Serbian Film was, this segment's just kinda there. 3/10

S IS FOR _____: Director Jake West apes Grindhouse and uses those elements to good effect, but this is another super-serious segment with a jarringly depressing ending. At least it has a point, I guess. 7/10

T IS FOR _____: Do you miss Celebrity Deathmatch? Does the concept of potty training gone horribly awry appeal to you? If you're in that pathetically small segment of the population that answered yes to both questions, T Is for _____ is violent, surreal Claymation at its finest. Bonus: This is the only segment in The ABCs of Death that wasn't commissioned for the film. Director Lee Hardcastle won a slot for his film in a promotional contest, and this just might be the best film of the bunch. 9/10

V IS FOR _____: Probably the most ambitious of the films, but it's the very definition of "interesting failure." 2/10

W IS FOR _____: How the creator of Metalocalypse got a slot in this film is one of life's greatest mysteries. I have no idea what's going on here, and I'm not sure I want to. 1/10

Z IS FOR _____: Words cannot suffice, but here's a few: Bizarre. Unwatchable. Repugnant. This is a terrible end to an anthology of films that, despite a few flashes of brilliance, feels more like an endurance contest than a celebration of genre filmmaking. 0/10

MINORITY REPORT: Grisly murder by robots and flaming fart gases are the sorts of things that tend to elicit tons of nervous laughter; the kind of laughter that you only hear when people simply don't know how else to react. By that metric, I'm willing to bet this film is at least ten times funnier than Movie 43. - Joseph "Jay Dub" Wade