A Year in Short Films

Every year, at every Oscar party, there's always the one guy, the "sorta-movie" guy, who knows more movies than "I-only-see-superhero-movies" guy, but not as much as ACTUAL movie guys. So when the obscure categories come up, everyone looks at that guy, and he makes a brilliant multiple-choice guess, and he's always, always wrong. Now, you don't have to be that guy. ShortsHD, a TV channel I'd never heard of until now, is bringing the short films to a LOT of theaters. It's a good night of entertainment that makes you look more cultured. However, the problem with watching a ton of shorts is, it's entirely possible to step out to go to the bathroom and miss an entire film. To avoid this, simply consult Vargo's Short Film Guide 2013! I'll be covering all the live-action and animated shorts separately and will include links to trailers or full films, where available.

Death of a Shadow: (France/Belgium) Death of a Shadow is a visually inventive film with a creative premise that, in execution, is basically a pretty good episode of The Twilight Zone. Of course, that's still fairly high praise, because even bad Twilight Zone episodes are decent shorts. Death tells the story of a World War I casualty (Matthias Schoenaerts) who tries to buy his way back to life by taking pictures with a paranormal camera that captures the shadows of people as they die, which are then hung in what appears to be Vincent Price's art gallery. Schoenaerts is the real highlight here, showing a great deal of passion and power through his maybe ten lines of dialogue. This is the rare example of a short film that might perhaps work better as a feature-length, because while the story is cohesive, the concept is so good and the production design so interesting, it does itself a disservice by being confined to half an hour. 8/10 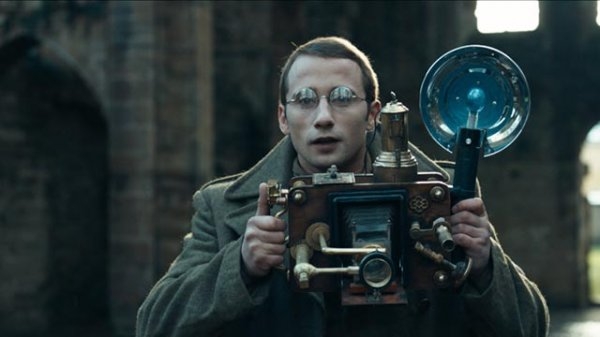 Who the hell would pose for this guy?

Curfew: (USA) One of my favorites of the five live action films, Curfew is a darkly sweet story of family and redemption, and also pretty sweet music video. Writer/Director Shawn Christensen plays Richie, a junkie whose attempt at suicide is ruined by a sudden desperate request from his sister to watch his niece, Sophia (Fatima Ptacek) for a few hours. Christensen's humanity carries the familiar storyline, (Look! The kid is smarter than the grownup! That's different!) and his interactions with Ptacek are hilarious and heartwarming. Christensen doesn't tread any unfamiliar ground, but he does manage to sneak in a dance sequence that doesn't make me absolutely furious, so for that reason alone, it's better than roughly 60% of actual feature-length films this year. 9/10

Buzkashi Boys: (USA/Afghanistan) While beautifully shot, and skillfully acted, this film didn't really do much for me. However, I like that it exists. The fact that it seems to be getting a lot of attention is much more important that my personal feelings on the matter. The film follows two young boys Rafi and Ahmad, (Fawad Mohammadi and Jawanmard Paiz, who deserve all the help getting to the Oscars that they can get) growing up in Kabul, where they dream of leaving their lives behind to become riders in the sport of Buzkashi (it's a lot like polo, except it's played with a dead goat).

Paiz and Mohammadi are charming and the city of Kabul makes a beautiful backdrop, but ultimately the story left me confused and wanting an explanation. Either there's some crucial subtext about Afghani culture and history that I'm not smart enough to grasp, or the moral of the story is literally "Don't ever follow your dreams. Ever." And for a film whose entire production history is based on people dreaming of a burgeoning Afghani film industry, that's kind of a weird message to send. 7/10

Henry: (Canada) Director Yan England makes a film about aging and loss that actually becomes less interesting when you realize it's about aging and loss. England's camerawork is solid as it dances around a hospital corridor, following our aging title character, (Gérard Poirier), as he looks for his wife, but the story's momentum drops off quickly. As with Curfew, the saving grace is how believably and convincingly our lead portrays his role. Poirier's disorientation switches from intriguing to heartbreaking in an instant. 7/10

Asad: (South Africa) Funny, poignant, and political, Asad is my pick to win the Oscar. (Buzkashi Boys being second) .A cast of all-Somali refugees tells the story of Asad (Haroun Mohammed, another great non-professional actor), a young Somali boy who is torn between joining his friends on the pirate crews or taking the more honorable, but less profitable, route of a fisherman. As his village is ransacked by hungry soldiers from Mogadishu, Asad continues his friendship with an old fisherman, described as "The only man in Somalia who doesn't want to take things." It's a surprisingly warm child's-eye view of life in Somalia, from people who have lived it. It also features an irritated-looking cat, so there ya go, internet. That should get you to watch it. 10/10

Mom, I told you never to call me while I'm in the bath!... Just assume I'm always in the bath, mom.

Maggie Simpson in: The Longest Daycare: (USA) Maggie stars in a five-minute Chuck Jones-esque face off where she attempts to protect a butterfly from bug-smashing Baby Gerald, while music by Hans Zimmer plays. Like the best Simpsons gags, there's some not-subtle political commentary involved; here, the original crew harps on the American school system as Maggie navigates through the "Nothing Special" section of the Ayn Rand School for Tots, a callback to the Simpsons episode "A Streetcar Named Marge." Maggie Simpson is a great choice for a silent protagonist, and the whole thing is a fun callback both to the high points of Looney Tunes cartoons and to a time when The Simpsons had some heart, and was still, y'know, good. 8/10 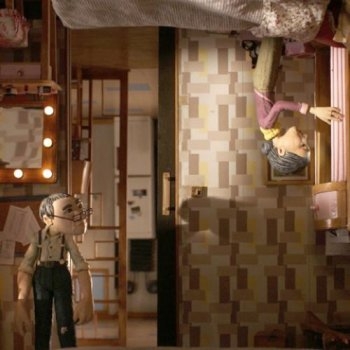 Oh, what a whimsical situation we find ourselves in.Head Over Heels: (UK) Here's a stop-motion animated feature about an old couple that is never quite on the same level, literally. They live in a flying house, and one lives upside-down on the ceiling of the other. The film cribs heavily from Up, Wallace and Gromit, and a Lionel Richie music video, while managing to not be as good as any of these things. Most of this is because the story is basically just one gag that drags on for way too long, but I'll admit that a good deal of it comes from the very off-putting design of the puppets. Those things freak me out, man. The design of the old man also made me think of Jeff Dunham, and I automatically hate anything that makes me remember Jeff Dunham exists. 4/10

Fresh Guacamole: (USA) Full film can be seen here. There's not much to say about this one. It's an interesting and entertaining display of editing, but that's really all it is, a technical display. There's literally no story being told here, unless you count "A dude made guacamole" as a story.

Adam and Dog: (USA) Adam and Dog is exactly what it sounds like, the story of the first man, and his dog. Adam and Dog is one of the most beautiful pieces of traditionally drawn animation in years, featuring the art direction of Disney legend Glen Keane. It also displays one of the hardest things in the world to draw and animate convincingly: A realistic, non-cartoonish human body. It's pretty light on story, but heavy on visuals. I'm also easily swayed by adorable dogs, making this my personal favorite of the five animated films, scoring aside. 9/10

Paperman: (USA) (Full film) Paperman is going to win the Oscar. Paperman deserves the Oscar. Paperman is excellent, and its one flaw is that there's no adorable dog like in Adam and Dog. Moreover, though, Paperman is not just a good short film, it's an important short film. It's the biggest experiment Disney has made so far in blending traditional and CGI animation to make something completely new. The music, animation, and style blend together to tell a sweet and simple story. Given the positive reception to Paperman, it's very likely we will see a feature film in this style, and that may end "3D sucks" internet whining forever. (Okay, maybe for like a month, but I'll take what I can get.) 10/10