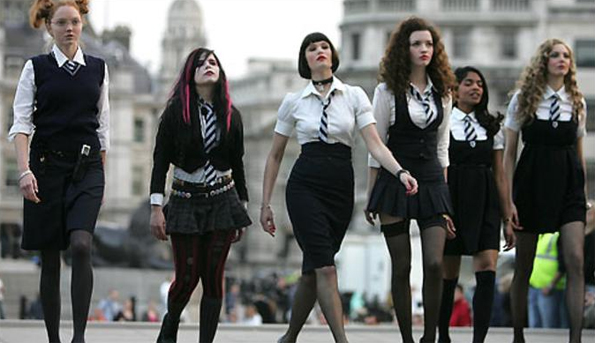 College Movie for the BBC crowd.

St. Trinian's is a British comedy, so there's really only two ways it can go: dry and deadpan, or over-the-top, full of slapstick and cross-dressing. The former seem to be doing better at the American box office these days, so I'm going with that. This movie will probably be a lighthearted British satire of the American college movie.

Rupert Everett in drag. Man did I get this one wrong.

It's not all bad, though. St. Trinian's opens with five very funny minutes of the best kind of British comedy: Anabelle, the newest student at St. Trinian's (the worst school in the country), drives up to the school amid flaming cars in the ditch, desks falling out of windows and a child being dragged through the mud by a tractor. Then Rupert Everett appears in a dress and sits on a whoopee cushion, thoroughly derailing the movie for the rest of its running time. The movie quickly devolves into grating and predictable slapstick routines, with people getting hit in the head and falling out of windows, faces being mashed into glass, a dog humping a leg (twice), and Colin Firth literally getting ants in his pants. Really. We had to import this from the other side of the Earth.

Not only does the movie wallow in terrible old British slapstick, but it also hits on almost every single cliché in the tired "save the school from closing" storyline. I started fidgeting and checking my watch right around the time the girls started cheating their way through a test via hidden earpieces. I was hoping to see the movie satirize the typical college movie plot, but instead it follows it note for note without the slightest hint that it's winking at the camera. In fact, the musical montages (a staple of the college movie), occur about once every 20 minutes. That's obscene even for a parody. Almost as obscene as having to look at Rupert Everett in drag for an hour and a half.

As for the plot, it doesn't even appear until the half-hour mark. Until then, it's joke after joke about St. Trinian's teachers doing drugs and teaching the kids how to pull off petty crimes, with the occasional shot of the student's secret vodka-brewing facility. The vodka business is overseen by Russell Brand in a sideplot that goes nowhere and is never resolved. Same with a plot about the new English teacher, who appears as a major character in the first twenty minutes and then promptly disappears until the end of the movie. Stephen Fry makes a cameo as himself, but all the movie can find to do with him is to have him do a bunch of drugs and slur. The whole "authority figures on drugs" thing gets old about 15 minutes in, but the movie milks it right to the end. It's excruciating watching one joke being stretched over half a dozen subplots that don't go anywhere. Not quite as excruciating as Rupert Everett in drag, but it's close.

By the time a character exclaims "Houston, we have a problem!" it becomes clear the movie came out about 10 years too late. The college movie has been satirized to death, and slapstick's been gone for years.