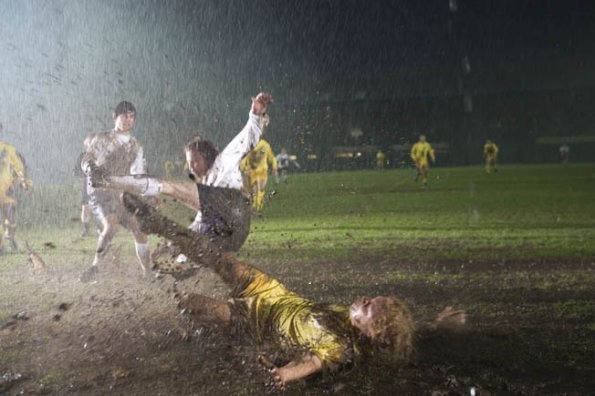 A Matrix move and a half, out on the football field!

The Damned United: A treat as rich as Nana's tea

I hate football. That is to say, I hate soccer. But I'm very drawn to the idea of a character study of Brian Clough -- one of the most controversial figures in football and something of a local legend where I'm from -- especially when rising star Michael Sheen is taking the lead and Peter Morgan is writing. It holds a lot of promise and I have high hopes that it will deliver.

The Damned United is a triumph!

Focusing not on the intricacies of football as a sport, but on the lives of the men behind the sport, it never alienates any portion of its audience. This could have been the greatest obstacle facing its American release, seeing as few people know or care about football (soccer) in the States.

The film tells the story of Brian Clough's hugely successful tenure managing Derby County with his partner Peter Taylor (Timothy Spall) and his later, briefer time managing Leeds United alone. Driven by his rivalry with former Leeds manager Don Revie (Colm Meaney), Clough makes a string of rash decisions and forgets about what is most important to him.

The Damned United is a damned near perfect example of cinematic elegance and craftsmanship, showing us the two episodes in Clough's life running parallel, and while it may seem daunting to those not versed in the particulars of the sport, it never gets confusing or overly saturated in explanation. At one point, Clough, too nervous to watch, sits out an entire match in his office, waiting for the clock to tick over and only guessing at the events on the pitch from the shadows cast on his office windows by the crowd outside. The whole scene is a great achievement in visual storytelling.

Michael Sheen is brilliant as Clough, wild and ambitious with just enough human frailty. He even shows some talent with a ball himself. The rest of the cast is uniformly excellent, including a wonderfully gibbering, cigar-chomping Jim Broadbent, complete with gigantic earlobes. Timothy Spall also stands out as Clough's long-suffering partner, with their relationship forming the real backbone of the film's narrative.

Packed with brilliantly observed wit and humour, the film never gets boring. At 97 minutes, it is only slightly longer than a football match and infinitely more entertaining. I urge American audiences to see this as soon as they get the chance and not just dismiss it as a sport film they don't give a hoot in hell about.