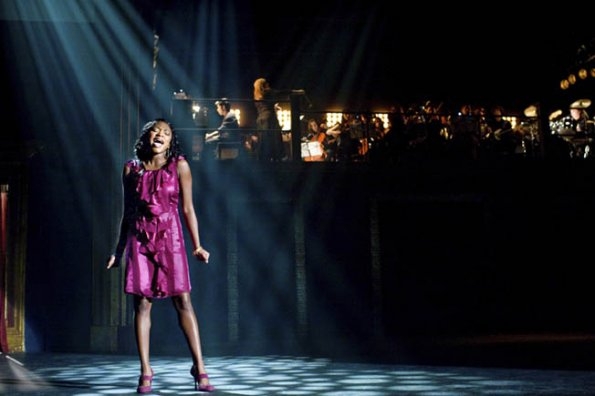 Having never seen the original movie upon which this is based, nor the television show, my expectations for Fame are extremely low. As nice as it is to see Frasier Crane reunited with his ex-wife Lilith, I don't see myself buying into a musical that is aimed at people much younger and more female than I am. But, at least it doesn't have vampires.

Focusing on a group of young wannabe stars of stage and screen and their trials and tribulations going through a supposedly grueling four years at a performing arts academy, Fame had a charm that I couldn't deny, even though I admittedly fall well outside of its target demographic.

The young stars are a startling bunch of discoveries -- particularly Naturi Naughton, who takes centre stage throughout the proceedings and sings better than anyone on the charts right now. Collins Pennie also shines as a budding young actor who forms a moving bond with his avuncular drama coach, played by Charles S. Dutton. On top of this, it manages to maintain a lighthearted sensibility that you can be sure won't alienate its prospective viewers, keeping the naughty language to a minimum and never overstepping the bounds of decency.

The script gets a little soapy at times, making you wonder why certain characters were considered interesting enough to be a central focus while others are built up early only to vanish into the background. On top of this, the third act takes a long time to wrap up. The film feels like it's about to end for a good 20 minutes before it actually does. One gets the feeling that this was cut down from a freakishly long script and assembly, and I'm thankful for that because I don't think it would have stood to be much longer.

Early in the film, we are treated to the kind of song-and-dance number that is the mainstay of the musical genre; however, this actually feels spontaneous. Every young participant contributes in his or her own specialised way, be it by rapping, tap-dancing, singing or playing an instrument. It's hard to explain this without giving the impression that it's just another song in a musical, but trust me on this one: This scene alone would be worth the admission.

This may seem on the surface like a remake for the Disney Channel generation, but beneath that it is far more engaging than anything the Disney Channel churns out. Furthermore, Fame serves as a reminder that no matter who we are or what we expect from a film, sometimes watching talented people perform is entertaining enough.