Our poor romantic-comedy correspondent Joseph "Jay Dub" Wade takes a chance on Date Night, that movie you weren't going to watch anyway because seeing it advertised on TV every five damn minutes was quite enough.

Date Night alone... It's Valentine's Day all over again.

EXPECTATIONS: The networks have been shoving the Date Night trailer down my throat ten times a night for the past six months, so I'm expecting little more than glorified Office/30 Rock crossover fan fiction: "Michael Scott and Liz Lemon versus the Mafia." Now it's Hollywood's job to either confirm or deny this prediction. Do your worst, Hollywood.

REALITY: Well, I certainly asked for it, didn't I? Date Night is a boring comedy about boring people who desperately want to stop being boring. It makes sense that these are the very people for whom this movie seems to have been made. They're all probably out on their own date night, enjoying a simple evening with a lame comedy that won't interrupt them while they sort out next week's grocery list. I, on the other hand, actually tried to engage with Date Night and got nothing in return. 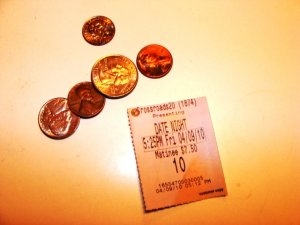 The marker of loneliness.The film comes across as an idea that might have sounded fantastic in the boardroom: "Let's get two of the funniest people on network TV, put them in a number of dangerous situations and watch the hilarity ensue! It'll HAVE to work this time!" Instead, it ends up translating into a film that's neither as edgy as it could have been nor nearly as funny as it should have been.

Phil and Claire Foster (Steve Carell, Tina Fey) are a pair of blah suburbanites who are tired of their routine and desperately need a night out, much like many of the people sitting in the theater with me. For the Fosters, a good night out means going to dinner and making fun of the other customers (much like myself, as it turns out). One night, they decide to go to a fancy new restaurant in downtown Manhattan, and after stealing a reservation from a pair of no-shows, Phil and Claire are hounded by a couple of thugs working for a local mob boss (Ray Liotta). Phil and Claire spend their wacky night out trying to clear their names, expose the mob boss and get home before they owe the babysitter a shit-load of money.

Another key piece of this puzzle is Holbrooke (Mark Wahlberg), a "security guy" to whom the Fosters go for vital information whenever they have no idea where the film is supposed to take them next (this happens about five times, all told). His defining characteristics are that he owns zero shirts and inexplicably has the computer from Minority Report in his closet. Claire awkwardly flirts with him while Phil gives him the stink-eye. The joke here is that Marky Mark is better than Steve Carell. You might say, "It's funny because it's true," only it isn't funny because it's not a joke. 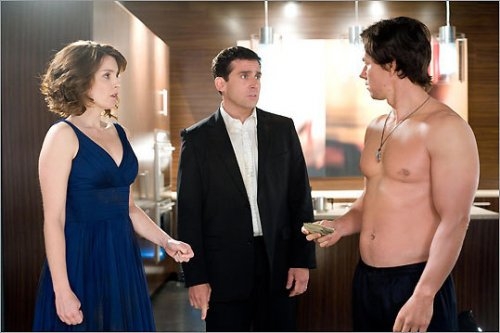 Date Night isn't really a bad movie in the sense that all of the shots are in focus and it has characters that do things, but it's a complete and utter failure as a comedy. What makes Steve Carell and Tina Fey so funny on TV is the fact that they play wacky caricatures of people who could never possibly exist in the real world. They're funny because they're outrageous, even if they're constantly being upstaged by all the other weirdos on those shows. Here, though, the two are supposed to be playing relatively normal people. Now I don't want to offend anybody, but normal people are fucking boring and generally not funny. That's why writers invented things like jokes and explosions.

In theory, Date Night might work if the situations in which the Fosters find themselves were in any way outrageous or over-the-top. Instead, we have to watch them bungle their way into and out of the lamest gangster movie you're bound to see all year (or decade, who knows). Of course, I can't really blame Steve Carell or Tina Fey for any of this. They're clearly trying their hardest to spin this crap into gold, or at the very least some kind of lesser precious metal. 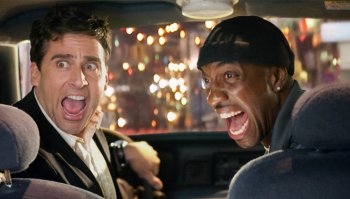 "DAMN!! Did you just see that joke?"If anyone's to blame for Date Night accidentally sucking, it's screenwriter Josh Klausner, one of the twelve people responsible for writing Shrek the Third. It seems like he wrote a fairly straightforward movie about an innocent couple thrown into a seedy underworld situation and assumed Steve Carell, Tina Fey et al would ad-lib all the jokes on their own, and based on the footage shown over the end credits, they did a loooooot of ad-libbing. A handful of gags and one-liners connect every now and then, but for the most part there's a serious lack of funny going on in this movie. It helps that Carell and Fey have decent chemistry together, but ad-libbing can only get you so far, guys.

Again, Date Night feels tailor-made for people just like Phil and Claire Foster. Every joke is underlined and made obvious for even the laziest of viewers. I'm pretty sure there's even a scene in which Phil points and screams as a joke whizzes by, just in case you missed it. This I blame on director Shawn Levy. His films have mostly been innocuous family fare up to this point, which is a fine showcase for, say, Steve Martin struggling to pronounce basic English. However, when you replace that with Steve Carell licking a stripper pole and dry-humping a dance floor, you'd better be able to handle that without cutting away when things get too icky. Heaven forbid John and Jane Suburbia get offended or confused at a Steve Carell movie.

MINORITY REPORT: Steve Carell has gone from being the most promising comedic talent of his generation to a complete wash-out in record time. With his television work going mostly unnoticed and Tina Fey being almost entirely unheard of outside of the US, it's a wonder this film has gotten a release in Britain at all. -Ian "ProfessorClumsy" Maddison