Driven by a lust for justice, Ian "ProfessorClumsy" Maddison dons a mask and cape to fight crime in the streets. His first call of duty? Reviewing Kick-Ass to protect the innocent from disappointment.

Kick-Ass: A Statement On Something-Or-Other.

EXPECTATIONS: During the current global campaign to adapt every comic book ever published into cinematic form, the inquisition settled upon Kick-Ass, a comedic super-hero "reality" story. I've never read this comic, and I've done a good job of not even hearing of it until recently, so I really have no preconceptions. The trailers and posters make it look like Watchmen with gags, so my hopes aren't high.

REALITY: As a film about moral ambiguity, it's a shame that Kick-Ass doesn't quite have the strength of its own convictions. Just when you think you're going to be taken somewhere deep and meaningful, Kick-Ass abandons its most interesting elements in order to climax with a stylish, action-packed third act.

The film follows the exploits of Dave Lizewski (Aaron Johnson), a massive nerd who decides to become a superhero named Kick-Ass because he thinks it will be cool, only to find that it's actually quite difficult. In a city gripped with fear, under the iron claw of crime lord Frank D'Amico (Mark Strong), he soon finds himself out of his depth. 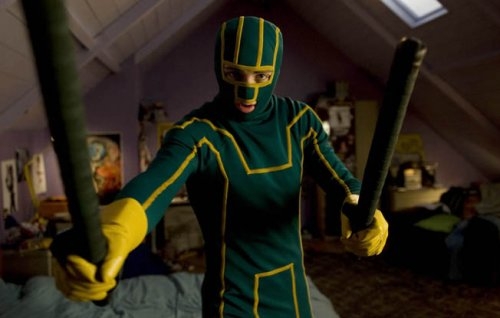 Britain is just churning out these super-talented actors. Take that, America!

During a dangerous encounter with a gang of drug dealers, brought on by an effort to score points with his schoolyard crush (Lyndsy Fonseca), Kick-Ass discovers he is not the only game in town. He is saved in timely and gruesomely violent fashion by a much more secretive and effective pair of costumed crime fighters; Hit-Girl (Chloe Moretz), a precocious wunkerkind of justice, and her doting father Big Daddy (Nicolas Cage). Because Hit-Girl and Big Daddy sabotage D'Amico's operations in a stealthy fashion, D'Amico assumes the much more public Kick-Ass is to blame. To lure him into a trap, D'Amico's son Chris (Christoper Mintz-Plasse) becomes Red Mist, passing himself off as an eager sidekick-to-be. Things can only get messier from there. 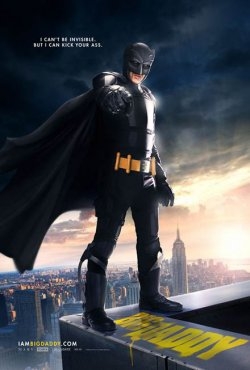 It's totally cool, he's not Batman.After some pacing issues early on, Kick-Ass settles into a very entertaining stride for a while, thanks largely to its excellent casting. Aaron Johnson makes for a very engaging and likable young leading man, and I look forward to seeing more from him. However, Mark Strong and Nicholas Cage steal the show. Strong is hilarious throughout and never fails to raise a laugh, even during his darkest moments. Cage's performance is superbly odd, and he clearly loved every minute of hamming it up and channeling Adam West.

Kick-Ass fluctuates between being genuinely clever and trying too hard. Strong and Cage wring as many laughs out of the material as they can and make it look easy, and there are times when the script throws out some real zingers to keep the comedy rolling. However, much of this film's amusement quotient hinges on how funny you find watching a small child violently murder people and say naughty words. In my case, it's not all that much.

As we started to get into the meat of the story, I really felt that the film was going places I hadn't expected, exploring the notion of its own morally ambiguous premise in the character of Big Daddy and the way he leads his daughter through her life of fighting crime. This is mirrored in Frank D'Amico's relationship with his son, which is somehow much more stable, in spite of all the evildoing. Unfortunately, this entire trend is abandoned in favour of some "super-cool" action sequences, and the whole film becomes what it set out to parody.

There are many extended scenes of bloody violence, usually perpetrated by Hit-Girl or Big Daddy against supposedly evil men, most of whom are actually quite charming and likable characters. I'm sure that this is "the point" and you're sitting there getting mad at me for "missing it". But the problem lies with how this is presented, driving home the morally ambiguous nature of the entire scenario, and then descending into silliness. Somewhere in there, it seems that the filmmakers either lost their balls or lost sight of the film they were making.

MINORITY REPORT: I once took to wearing a costume and protecting the streets from evil-doers myself. I was known as "The Motorcycle Riding Man Whose Head Was A Flaming Skull And Is Also Probably A Ghost Man." I always thought that had a splendid ring to it, even though it was a wholly inaccurate description of myself or my costume. I used to wear an invisible suit, and I would scream loudly whilst running out of dark alleys. Anyone who ran away was obviously a criminal and was swiftly strangled. I had a 100% success rate. -Montague "Legally Sane" Smythe