EXPECTATIONS: At this point, the very words "From the mind of M. Night Shyamalan" illicit groans and cries of "Oh, fuck that!" in cinemas everywhere. Discussion of Devil has devolved into attempts to guess the twist and demerit everything that Shyamalan touches. Personally, I think this looks to be an interesting little character-driven horror film that could turn out to be enjoyable. Fingers crossed.

REALITY: I had some hopes for Devil, sure, but I don't think I was ready to enjoy it quite as much as I did. This is a film that is full of surprises - I don't mean in a narrative sense, as you might expect from a Shyamalan story - but in a cinematic sense. I was surprised by its subtlety at dealing with the horror themes; I was surprised by the portrayal of the police force as a group of competent professionals (something very rare for a modern film) and, most of all, I was surprised by its uplifting nature. 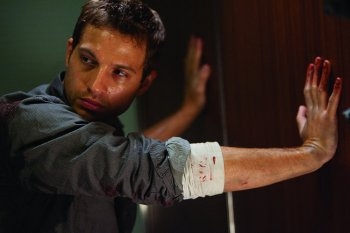 Oh look, it's professional Tom Hardy lookalike Logan Marshall-Green.On a seemingly normal morning, five strangers are trapped in a lift, causing inconvenience, claustrophobia and everything else you would normally associate with being trapped in a lift. Oh, and one of them is murdered when the lights go out. Called to the scene is Detective Bowden (Chris Messina), who must try and figure out exactly what is going on, applying logic to a situation that defies it. As things become harder to control and understand, Bowden must face the possibility that one of the passengers of the lift might be the devil in disguise.

It's a simple premise, something that has been described as being akin to The Twilight Zone, and it certainly relishes its own simplicity. Devil essentially involves two directly related, but fundamentally different, narratives that intertwine and finally meet in the climax. The one that the marketing has been heavily focused on is the horror story about people trapped together in a confined space, forced to confront their own demons in the face of the devil himself; the other is a believable and compelling police procedural about an atheist detective desperately trying to make sense of what is occurring in the lift. The horror elements of the locked-room story drive the energy of the detective story, and the believability of the police procedural grounds the horror narrative in solid reality.

You might be wondering what I mean when I talk about believable police procedure, given that I have absolutely no understanding of actual police investigations or how they work. Well, what I mean is that the police, as depicted in this film, are hard-working, intelligent people who do their jobs to the best of their abilities at all times, rather than being "tough cop on the edge" stereotypes or even resorting to bumbling comic-relief partners. The way that Detective Bowden enters the situation, controls the crime scene, makes use of the resources he has available to him and generally just does his job properly whilst still being a likable character is very impressively executed.

So, let's talk about the lift situation. The characters in the lift are not given names and are instead known only by a simple title: Mechanic (Logan Marshall-Green), Old Woman (Jenny O'Hara), Young Woman (Bojana Novakovic), Guard (Bokeem Woodbine) and Salesman (Geoffrey Arend). The reason for this is that it plays largely on prejudices. Not just the prejudices of the conflicting characters, but also to the prejudices of the audience. In its establishing shots, the film tells you everything it wants you to know about these characters in order for you to jump to a conclusion about them and continues to change these ideas as the story progresses. It's rare for a film to play to an audiences potential, latent racism and also its derision of racist people at the exact same time, but that is exactly how it operates. I admit that this is audience manipulation of the worst kind, but it does work very effectively and let's face; the best horror movies have always relied on audience manipulation anyway. 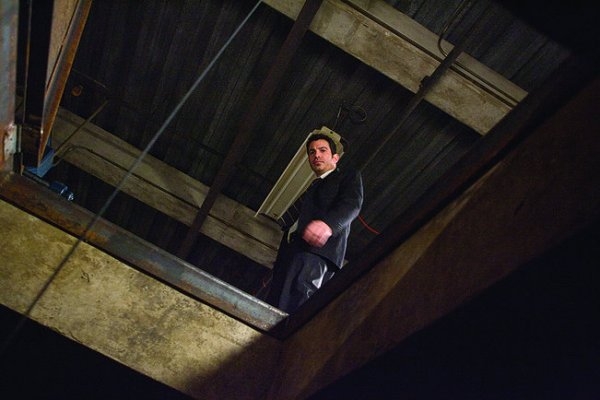 The investigation is going well. I have discovered the elevator shaft.

The only real weakness here is that some of the dialogue and interactions between the five victims feels forced. There are too many instances of plot convenience when two characters start to have a conflict and then one of them dies and it's always the one you didn't expect it to be. Fortunately, the cast members do a good job of making it work, especially Geoffrey Arend, who makes an art form out of being both charming and insufferable at the same time.

To call this a straight horror film, though, would be doing it a disservice, especially as it drops almost all of its horror elements in the third act. You might be sitting there wondering right now which of the nameless characters turns out to be the devil, but the moment this is revealed is the moment you realise it just doesn't matter. What matters is the main characters finding the strength within themselves to make amends for the terrible things they have done or that have been done to them. It's interesting for a horror film that deals with religious themes to end in such an uplifting way. Even if you hold no religious beliefs yourself (as I do not), the moral implications and the fact that you find yourself really wishing for the film to end with a simple and moving interaction between two people is a testament to the storytelling powers of all involved.

What is also interesting is that Devil explores similar ideas to those explored by Shyamalan in Signs; ostensibly religious themes that also play on common morality. This film is not preaching to the audience, and this is clear in the beliefs of its lead character. He is not a converted, born-again Catholic in the film's dying minutes, but he has grown strong enough to make a moral decision that is much smarter and more elegant than a simple good-guy/bad-guy finale, and maybe we can all learn a little something about ourselves along the way. Call me old-fashioned, but I still think that a good, strong moral message can count in a film's favour.

MINORITY REPORT: I was once trapped in an inescapable situation and many of the survivors trapped with me were convinced that the devil was among them. As their numbers dwindled, due to certain unforeseen incidents, it became clear that there was no devil among us. Only sharp implements and hunger; a dangerous combination in the wrong hands. Needless to say, I was the only one to escape that situation. - Montague "Legally Sane" Smythe

EDITOR'S NOTE: When Satan is near, strange and terrible things transpire: Children bang their heads on the sharp edges of tabletops; toast falls to the floor jelly-side first; awful, ridiculous movies get positive reviews! -- Garbage Day