In Defence of Ben Affleck

EXPECTATIONS: I've never been really sure why Ben Affleck is so hated. Sure, he starred in Gigli, one of the worst movies ever made, but a lot of respected actors have made terrible films. Have you ever really looked at Michael Caine's filmography? Somewhere along the line, it became cool to hate Affleck, to the point where you have to remind people on occasion that he is an Oscar-winning writer. The Town marks Affleck's third time out as a writer, and the second time as a director, with The Town being the first of these movies to be high-profile before it comes out. Let's see if Affleck can make it easier to convince my friends that he's made up for Daredevil.

The Town follows Doug MacRay (Ben Affleck), a long-time thief from Boston's Charlestown neighborhood, known as the bank-robbery capital of the world. Along with his childhood best friend James Coughlin (Jeremy Renner), Doug leads a crew through a midday bank robbery that ends in the crew taking the bank manager, Claire (Rebecca Hall), hostage momentarily. After her release, Coughlin realizes that Claire lives near Charlestown and begins to wonder how easily she could identify them. To stave off the trigger-happy Coughlin, Doug tries to get close to Claire to see how much she knows, and the two of them start a relationship. 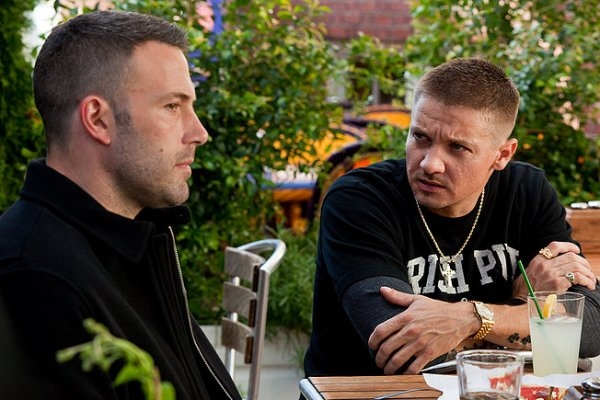 Ben, what are you even looking at?

In many similar crime films, the love story is usually the worst part, but Affleck and Hall manage enough on-screen chemistry to make the affair interesting. This is basically the film's greatest strength: Everything and everyone in it seems completely genuine. There's real heart to the movie, and genuinely funny moments interspersed throughout. When Claire tells the story of her abduction to Doug, not knowing he's responsible, he says "I'm sorry," to which she replies "It's not your fault." This should induce cringes and eye-rolls, but it doesn't. It feels like a very real thing for two people to say to each other.

The film is filled with moments like that, things which, if handled poorly, would provide enough fodder for a hundred standard movie trailers, but you don't notice it, because the performances are just that good. Jon Hamm's FBI Agent Adam Frawley is a good example of this. On paper, this character is probably the weakest part of the film. He's one-note and his tough cop shtick is a little cheesy, but with Hamm's delivery it works. Hamm's casting is an example of the right person in the right role; it's difficult to think that any other actor could pull it off, but "gritted-teeth monologue" is basically the man's forte.

I don't mean to say that The Town is a bad movie with good performances. It's a very well written film with a lot of heart, the dialogue feels fresh and real, and the motives are never unrealistic. We've seen Renner's character type before, the loose cannon sociopath member of the crew, but rather than leave it at that, the film goes out of its way to establish a line of reasoning for his behavior. He loves Doug like a brother, and he wants to protect him and his sister Krista (Blake Lively, in what might be her breakout performance.) This is what separates The Town from many of the other films in its genre: Affleck's script is smart enough, and his direction savvy enough, to successfully show us real people, genuine characters who come across as natural human beings, instead of props behind guns.

Of course, it doesn't hurt that Affleck knows how to use cinematography as part of the storytelling process. The camera is shaky when we're supposed to be confused, but never at any other time. There are occasional shots through a security camera; there are shots that are mute so the audience isn't clued in; there are many wide shots showing the city of Boston, really making the city a character in the movie. You can tell Affleck is in his element, that he's taking us on a tour of his hometown, making the film feel that much more authentic. Which is why my one complaint is such a large one. 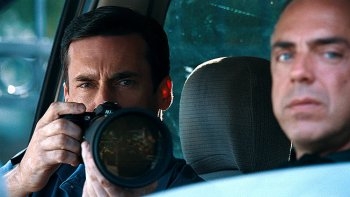 A rare shot from the upcoming A-Team 2In the third act, Doug is forced to pull his "One last big job" and get out of the business, but that last big job ... is robbing Fenway Park. From banks and armored cars to a Major League Freakin' Baseball stadium is a huge jump, and it's a bizarre shift in tone for the film's climax. Up until now, I've been praising this film for its authenticity and realism, but let's toss that out now because we can add a lot more car crashes. Even if you're going to up the ante a bit here, Fenway Park is a second home to Bostonians (Bostonites? Bostoners? Mighty Mighty Bosstones?), the people we've just established Doug loves so much. Is nothing sacred, Affleck? I can even see the logic behind choosing Fenway Park, it's the heart of the city of Boston, the city which has turned its back on Charlestown, and now they're striking back at it. I get it, I do. I get Larry the Cable Guy, too, doesn't mean it's not stupid.

But even ignoring that, the actual scene is an amazing shift in tone. All of a sudden, we're in a generic action flick, where trained military and FBI sharpshooters can't take out four guys who are cornered, and no one ever runs out of ammo. At one point, we see that Coughlin can't hit one man from the other side of a car using an assault rifle. (This is doubly funny when you realize this is a man who became famous playing a decorated sniper, and whose next role is a guy who is so good at archery it somehow qualifies him as a super hero.) It's all very entertaining, but it's incredibly silly, and a jarring shift that takes a minute to get used to. In one scene, the entire tone of the movie is shifted, then tossed right back.

That aside, Affleck shows great promise with his performance and his direction. His stylistic choices are interesting and fun. If he could make everything he did a labor of love like this, maybe even Surviving Christmas would have been tolerable. Can't say the same for Paycheck, though.

MINORITY REPORT: It's funny that you can take a defensive stance on Ben Affleck even after everything he did to you. Don't you remember that night? Him and your mother and your sister? Maybe you forgot, but I didn't. Oh yeah, I was there too. I saw what Affleck was up to. Green Zone, on DVD and Blu-Ray now. - Matt "Jason Bourne" Damon