Gayby is a strange film that seems to contradict its own messages, and then makes you realize that the contradiction is part of the point. It's a heavily forward-thinking film in its look at sexuality and the modern definition of parenthood. Gayby follows gay comic book nerd Matt (Matthew Wilkas) and his straight best friend Jenn (Jenn Harris), who decide that it's time for them to have a baby together. It's familiar territory, most recently covered in the 96% excellent Friends With Kids earlier this year, and that's the issue I took with it at first. How can something so progressive still be so insanely cliché? This is a film where even the gay sidekicks have their own gay sidekicks. 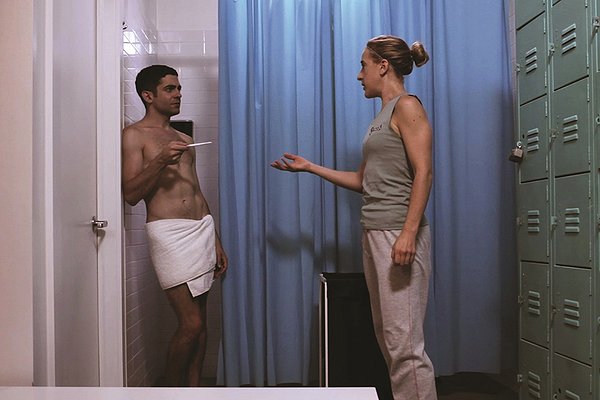 Gayby, in which a gay man and straight woman decide to have a babay. Hilarity undoubtedly ensues.

However, as the film sat with me longer, I realized that this is part of the brilliance of Gayby. Gay romantic comedies deserve the same tired, worn-out ideas that straight ones do. For example, anyone who works in a comic book store in a movie is ALWAYS a failed comic book writer/artist, and they will always have their big break by the end of the movie with a stupid comic that has to do with their story arc. The film mercifully spares us an offensive falling-in-love plotline from the two main characters, but it does follow the same structure as most traditional couples, right down to the fight at the end of the second act. (This is actually one of the best scenes in the movie, because it contains an excellent soulful cover of Beyonce's "Crazy in Love" by Antony and the Johnsons.)

The film is also an interesting and funny look into gay culture, a subject that doesn't get much honest coverage in film. One of the stongest scenes involves Matt staring at the bulletin board at a gay resource center with his friend Nelson (who became a "bear" after becoming fat and too depressed to shave after quitting smoking), and wondering "What do all these letters even mean anymore, anyway?" The point of Matthew's quandary, and indeed, the entire film is that all these people, no matter what letter they fall into on the board, are people, and they deserve love, happiness, children, and overused plot devices as much as anyone else.

Stand-Up Guys features Walken and Pacino as Doc and Val, a pair of aging mobsters reconnecting on Val's first day out of prison. Their "Reunited and it feels so good" festivities are cut short by this ultimatum: Doc has 24 hours to kill his best friend or suffer the consequences. Whichever way you think this may go, it doesn't. Instead, Val is accepting of his fate, and the film becomes an exploration of forgiveness. Doc and Val bust their old partner Hirsch (Alan Arkin) out of a retirement home, steal cars, eat steak, and quote They Live, as Val plans to make the most of his last day of life. It's like The Bucket List, except you leave the film still having respect for everyone involved. 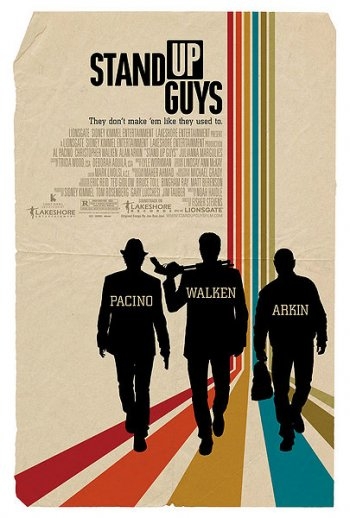 Stand Up Guys, not to be confused with Stand Up, Guys! which is a much shorter and less interesting story.Walken, Pacino, and Arkin all turn in top-of-their-game performances. (Is it just me, or is Alan Arkin in particular really hitting his stride now that he's in his 70s?) However, that doesn't save the movie from an aimless script. Yet another joke is made where old people can't figure out push-button car engines, and plotlines appear as needed, with a thug or two showing up every once in a while to remind you that yes, this is what the movie is about.

It's all easily ignored, though, because the movie is entertaining and endearing enough that you don't care that much about its flaws. It's a gangster movie with Pacino, Walken and Arkin, a prospect that's just as appealing now as it's been for the past 40 years.


The Everything Will Be Okay Trilogy

An animation project nearly eight years in the making, animator Don Hertzfeldt's pet project is something I'm having trouble describing. It's surrealism, yes, but it's also incredibly grounded surrealism. The trilogy follows Bill, an animated stick figure man who has a fairly normal life until he starts suffering memory loss and hallucinations triggering from a possible family history of mental illness. Hertzfeldt animated and filmed all the scenes himself without using computers, employing multiple layers and split-screen effects on 35MM film. This results in frightening scenes of overlap where everything, visuals and sound, feels distorted and warped. It's brilliant and terrifying and awe-inspriring.

Mercifully, Hertzfeldt realizes there's only so much of this you can take, and so he breaks these up with hilarious and bizarre dark comedy, culminating in an introspective, existential, quandary. Everything Will Be Okay is a beautiful film that also scares the hell out of me. It asks the question "What's life like when you can't trust your own brain?" It's during the comedy downtimes that you realize this is what schizophrenics see all the time. I wish there was someone in the audience with a history of mental illness, so I could ask that person how accurate it was. They'd probably tell me it was the most boring film they'd ever seen.


In order to wrap this coverage up, I'm going to borrow an idea from our fellow SA column, Video Game Article, and present you with some One-Sentence Reviews! Thanks again to the Philadelphia Film Festival, a high-class professional operation! Here's hoping I can trick them into letting me back in next year!


Room 237: An interesting and well-made documentary about the possible subtexts behind Stanley Kubrick's The Shining that feels like it would work better as a Blu-Ray feature, a format likely to provoke less of a "LOL you read too much man" reception. 30/50

Quartet: Dustin Hoffman's directorial debut is your standard "Put on a show to save the community center/theater/retirement home/slaughterhouse" plot, but with a twist: Everyone, including the audience is OLD!!! 33/50