We Need to Talk About Kevin

EXPECTATIONS: Based on the actors involved, the pedigree of director Lynne Ramsay, the poster and the extremely positive press this film has been getting, I ... well, I fully expect them to talk about Kevin. That's in the title, and I have no idea what this movie is about.

REALITY: Y'know, Eva (Tilda Swinton) and Franklin (John C. Reilly) never actually get around to talking about Kevin, but I suppose that's the point.

Told in a fragmented-flashback style that is reminiscent of Martha Marcy May Marlene, We Need to Talk About Kevin flip-flops between the years prior to, and the months after, the day when everything comes together and Kevin does ... something. While that something is a something critics and IMDb are all too eager to spoil, it's important to keep that plot point under wraps (which is why I'm gonna keep this short) -- because the film thinks it's important and obscures what that something could be until the 30-minute mark, when everything seems to come into focus. Knowledge of what that something is won't spoil the movie, but it might diminish the disorienting effect the first act is supposed to impress upon you, the viewer.

Essentially, We Need to Talk About Kevin is an art-house retelling of The Bad Seed -- one that never dips into overt horror, preferring instead to recount the little moments in which Eva discovers just how rotten Kevin (played at three different points by baby Rock Duer, preteen Jasper Newell and teenager Ezra Miller) is, and what he's capable of. 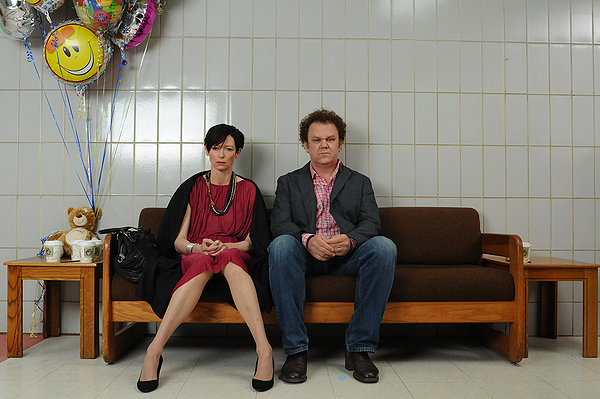 Happy birthday, Kevin! We weren't talking about you, honest.

Make no mistake, though: This is a horror film. It lacks significant gore or explicit violence, but Ramsay disturbs with a recurring use of red paint and an opening dream sequence in which Eva seems to be writhing amidst an orgiastic crowd covered in watermelon juice and maybe vomit, all while staring dead-eyed at the camera. It sure ain't pretty.

Miller, who handles the lion's share of the Kevin role, is the film's only, but damning, flaw. He never slips into Kevin fully enough to sell his dialogue (which, at points, is a bit ridiculous) or allows us to develop the illusion that he is doing anything more than Acting. Or maybe I just hate teenage actors a little more with each passing year, because Miller's failings resemble those of Chronicle's Dane DeHaan, and that was the biggest reason I hated Chronicle.

Man, I really hated Chronicle. But maybe if it had given its adult characters a little more screen time, I would've liked it a lot more, because in We Need to Talk About Kevin, Swinton and Reilly pick up (most of) Miller's slack. Watching their relationship deteriorate as Kevin learns how to play each parent against the other is a gut-wrenching slab of filmic feel-bad and a testament to their skills as actors; simply, neither Swinton nor Reilly has ever been better.

I'll say this: We Need to Talk About Kevin might not rank among the best films of 2011, but it's certainly among the most interesting.

MINORITY REPORT: "So... how about that Kevin?" Roll credits. - Ian "Professor Clumsy" Maddison