EXPECTATIONS: Given my scattered history with psuedo-religious movies, I'm not looking forward to this film. Pardon me for not getting excited to see two hours of "I'm old and cute and southern and sassy!" versus "Oh yeah? Well, I'm big and black and sassier!" with some ridiculous shoehorned religious message in the background to remind us that this is a movie they want to be shown in church. Man, this has "January movie" written all over it.

REALITY: Sometimes a movie comes along where you can tell the filmmakers really want to criticize their target audience, but they stop after remembering they also really want money. For about half its runtime Joyful Noise takes an interesting look at church workers and the inherent hypocrisy of their judgmental nature. It chastises people in positions of power for not being forward-thinking. Thematically, it has much more in common with Footloose than it does with Tyler Perry. (So much so that a member of the cast stops in for a cameo!) However, social commentary alone does not a #3 box office weekend make, so just to be safe, the movie piles on the predictability. 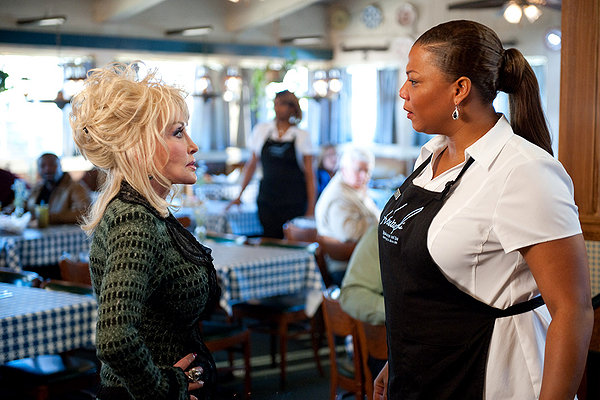 I don't know how anyone can look at Dolly Parton these days. Don't get plastic surgery, kids.

Joyful Noise starts with the death of beloved church choir director Bernie Sparrow (Kris Kristofferson). Confronted with this vacancy, the church board chooses working mom Vi Rose Hill (Queen Latifah) over Bernie's widow G.G. (Dolly Parton). For some reason, no one -- G.G. included -- seems to care that this woman's husband just died; they're too concerned with who will take over as head hand-clapper. Hijinks, surprisingly, do not ensue, even though this seems like a prime opportunity for hijinks and the ensuing thereof. Instead, Vi and G.G. are content to talk behind each other's back, and G.G. gets additional pleasure from subtly reminding everyone that her donations fund the church. This is amazing, because it's how churches in America actually function. Their bickering is set aside when G.G.'s grandson Randy (Jeremy Jordan) rolls into town and starts seeing Vi's daughter Olivia (Keke Palmer). Of course Randy joins the choir to shake things up a bit, and, of course, he's an amazingly talented vocalist and musician, because this is a musical.

In that regard, this film is like a first-season episode of Glee. Make of that what you will. The criticisms are the same, though. Any attempt to make the background characters more than one-note jokes falls flat, and everything that happens to get the choir to the giant national choir competition is basically pure happenstance. (Did I mention that they were in a choir competition? Well, they are.) One particular subplot about a background cast member losing his faith after losing his job is never fully resolved, and when part of your movie's point is "God takes care of things," you really can't afford any ambiguity.

Just like a teen dramedy, the film piles on the "very special" issues, but I want to emphasize that this aspect is handled quite well. Vi's son Walter (Dexter Darden) has Asperger's syndrome, played so well that it's recognizable at least three scenes before the film tells you so. The sweet friendship that Walter and Randy form is really the highlight of the film, and this is the reason I feel Joyful Noise should be required viewing for most denizens of the Internet. Walter hates his condition: It drives a wedge between him and the world, and it hurts his relationship with his family and the God he struggles to believe in. Please note that at no point in time does Walter use it as an excuse to stop showering, stalk women, or post on the Internet about ponies. 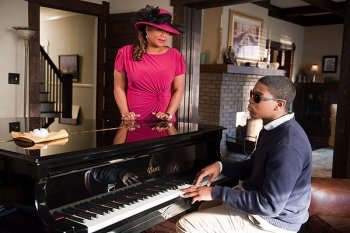 Of course, it's really just a prequel to Ray.One of the problems I have with church movies is their utter refusal to show the protagonist as anything but squeaky-clean. Joyful Noise does not suffer from this issue. The movie is at its best when Latifah is unashamedly portraying Vi as a lonely, stubborn, broken woman. Sure, this leads to a lot of eye-rolling dramatic moments, but Latifah herself is powerful enough of a leading woman to pull them off. Plus, it's all worth it to lead up to an intimately shot scene of Latifah in an empty church, playing piano and singing a hymnal to no one but a ghost choir.

However, let's talk about Dolly for a second. First off, I always like to remind people that Dolly Parton has written basically every country song you've ever heard in your life. Second, the character of G.G. is a fascinatingly missed opportunity. G.G. is a bad, manipulative person who uses her wealth and lack of shame to blackmail people, including the church pastor, into getting what she wants. She somehow manages to get away with it unnoticed because of Dolly's perfected Sweet Southern Girl persona. She wanders around the set saying things that sound profound, but really make no damn sense, like "When the foxes invade the henhouse, the rooster's always guilty."

What's fascinating is that the script is fully aware of this fake persona Dolly's run with for years, and even calls her out on it in a moment of amazing self-awareness. Hell, they even make a point out of tailoring a church robe to accentuate Dolly's boobs. She's like a tiny, large-breasted Morgan Freeman in more ways than one. This is a movie about a confused, lost black woman who learns a valuable lesson through the old trope of the Magical Rich White Woman. A more interesting take on this would have had Dolly playing a flat-out antagonist, but honestly, it's entertaining enough that no one except me really cares.

For the most part, the music is thoroughly entertaining, because director Todd Graff realizes that you can make any pop song into a gospel song by replacing "Baby" with "Jesus" and looking up at the sky while singing it. Also, there's a kid in this movie who sounds and moves just like Jackson 5-era Michael. However, when it fails, we get something ridiculous like a church-centered version of Usher's "Yeah!" This doesn't matter, though, because we're too busy with the choir arrangements that do work ("Man In The Mirror" and "Maybe I'm Amazed") to be dragged down by the ones that don't, like the incredibly boring Kristofferson/Parton duet. This is one of those films where I can't bring myself to recommend going out and seeing it if you were planning to skip it, but for what it is and the audience it's aiming for, it's really surprisingly good. I mean, Queen Latifah sings "Signed, Sealed, Delivered I'm Yours." How cool is that?

MINORITY REPORT: And just like Glee, not only are the TV ads inescapable, but also my dad refuses to shut up about it. - Joseph "Jay Dub" Wade