EXPECTATIONS: Maybe this just comes from an upbringing of watching far too many cartoons, but with a title like This Means War, I'm kind of expecting there to be a scene where Chris Pine shoots Tom Hardy in the face. Then when the smoke clears, a charred Hardy turns his mouth around from the back of his head and says the title of the movie. This would also explain the mask Hardy wears in all the Batman trailers...

REALITY: It's always fascinating to me whenever the critical consensus and I don't exactly see eye to eye. Ask most critics their opinion on This Means War, and three-quarters of them will tell you it's an uninspired mess of a romantic comedy that's dimmer than a dead lightbulb. And while they aren't exactly wrong about that, I came away from this film thoroughly entertained, if certainly no more cultured for the experience. 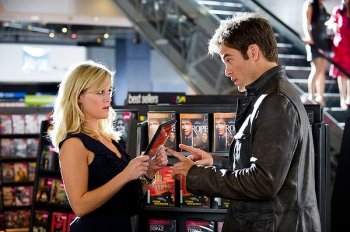 See? We're filmmakers who also love films. Except this one. Fuck The Lady Vanishes, I preferred the Angela Lansbury version.FDR (Chris Pine) and Tuck (Tom Hardy) are two improbably named CIA operatives who do everything together. They kill terrorists together, they do paperwork together, they even attend FDR's family picnics together. These two are the best of bros, and they swear to each other that nothing will ever come between them. Nothing, that is, until Tuck meets a young lady named Lauren (Reese Witherspoon) on a dating website. After a very successful first date with Tuck, Lauren meets FDR thirty minutes later, and is goaded into dating the both of them by BFF/sister/mother/who-the-fuck-knows Trish (Chelsea Handler).

There's your setup, and the follow-through involves FDR and Tuck utilizing the millions of dollars in manpower and equipment at their disposal to spy on Lauren and one another in order to settle their gentleman's agreement of who gets to keep her. Yes, this is a thoroughly creepy and deplorable premise for a romantic comedy, and in the real world it would get a CIA operative fired and locked up for life.


This Means War, however, clearly does not operate in the real world. This is a film in which a terrorist (a thoroughly squandered Til Schweiger) tracks Tuck halfway around the world using only a square of torn fabric; this is a film in which Lauren goes to a video store, snubs The Lady Vanishes as 'second-tier Hitchcock' and then decides to rent Star Wars; this is a film in which a grown man is allowed to play a violent round of paintball with a gaggle of small children. The point is this film seems to know precisely how unrealistic it is, and is dead set on entertaining us with its special brand of polished lunacy anyway. This Means War is not unlike last year's crowd-pleaser Real Steel, though not nearly as successful at reaching its goals.

Chris Pine and Reese Witherspoon perform precisely as one would expect in their parts; this is the kind of film these two pull off in their sleep on the regular. To watch Pine play the womanizing bachelor and Witherspoon the neurotic bachelorette is old hat at this point. The real surprise here is Tom Hardy. After seeing him play tough brutes in everything from Bronson to Warrior, it's a bit of a revelation to see Hardy hold his own in a romantic comedy. He plays Tuck as the sensitive and serious type, basically everything FDR is not, but he's able to match his co-stars' charisma step for step. It's fun watching Hardy charm the pants off the film because he's so completely against type here. 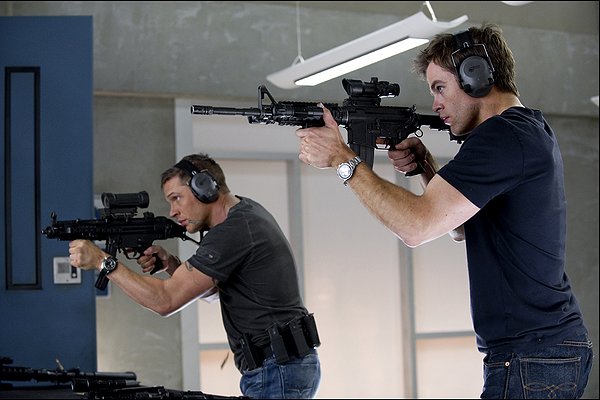 Just to the left, Robocop shows the two agents up. What are they gonna do, replace us?

The only real casting misstep to be found in This Means War is the curious case of Chelsea Handler. Here's a film designed to be a fairly down-the-middle PG-13 action comedy with little in the way of gross-out gags or lurid sexual content. However, for some reason they decide to drop Chelsea Handler in the middle of all that to add her special brand of rambling musings on sex and love to the mix. Instead of adding anything to the film, Handler appears to be the reason for a number of odd cuts to remove some of her more R-rated non sequiturs. To make this clearer: Chelsea Handler actively ruins the flow of every scene featuring Chelsea Handler.

Tonally, This Means War is all over the place. Director Joseph McGinty Nichol seems more interested in crafting an action film with a romantic subplot than the rom-com featuring action sequences that the script appears to be suggesting. The result is a film that ping-pongs between these two modes, and only occasionally pulls off a tone that seems to complement the two. It's difficult to say which portion of the film works the best, because the good scenes are scattered all over this hodge-podge mess.

But again, I must stress, it's a fun film when it can gets its bearings straight. Perhaps the disconnect between myself and the critical party line falls somewhere in our expectations. I fully expect movies like this to be cliched garbage, so when This Means War decides to eschew millions of cliches in favor of things like wacko espionage scenes and slapdash references to Goodfellas, I can't help but appreciate the fact that the film is at least attempting something different. It's not good art in any sense of the phrase, but like a bag of marshmallows singing "Make 'Em Laugh," This Means War is weirdly entertaining fluff.

MINORITY REPORT: Joe, your prolonged exposure to talking animal films has either made you soft or gay, but a positive review will bring neither Chris Pine nor Tom Hardy any closer to your sweetly quivering pucker, so let's not pull any punches next time, mmmkay? I mean, this is a film that tried to trick audiences into believing it's an adaptation of Spy vs. Spy, which means it's so fucking bad, marketing execs had to resort to the lowest deception to sell this movie. - Sean "Keanu Grieves" Hanson