EXPECTATIONS: Is it wrong of me to hope for the best? Wisdom tells us that practice makes perfect, so sooner or later Stephenie Meyer has to churn out a story actually worth adapting, right? A love triangle set in a post-Body Snatchers wasteland really isn't the worst premise. At the very least, I'm hoping Andrew Niccol's glossy sci-fi sheen will coddle me while I struggle not to spew bile all over what will almost certainly turn out to be a horrific logjam of genre tropes. I don't even know what I'm saying at this point. Stephenie Meyer brings out the worst in every writer, it seems.

REALITY: In a way, I think I should have anticipated this. After five films in which four different directors hacked away at the Twilight series, desperately attempting to separate the wheat from the disgusting chaff, we're right back where we started. With the Twilight movies going out in a blaze of nonsensical glory, it's time to start all over again and make fun of Meyer for just plain writing a bad story. And The Host is most certainly that. In fact, it's that in spades. 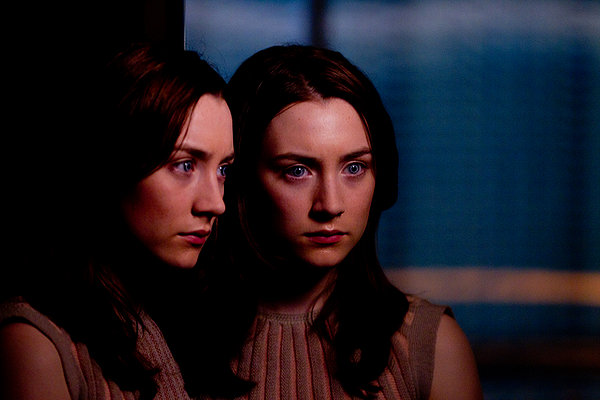 "Just you and me now, sport." Give yourself a pat on the back if you get that reference.


Earth has been successfully invaded by a race of aliens cleverly named Souls. Souls are tiny, spongy-looking creatures that enter their hosts through an incision in the back of the neck, which makes me wonder how any Soul ever managed to snatch a human body in the first place. Maybe Stephenie Meyer or Andrew Niccol are just really big fans of Pulp Fiction speculation, and they wanted to tie this film into the Tarantino-verse in a way that would completely fly under the radar of their target audience. Probably not, but it makes things more fun for me.

Anyway, as the film opens, human Melanie Stryder (Saoirse Ronan) has been captured by an alien Seeker (Diane Kruger) assigned to hunt down the remaining humans. Melanie is implanted with a Soul named Wanderer, who is then interrogated as to the whereabouts of Melanie's friends and family. Trapped inside her own head, Melanie convinces Wanderer to escape and head for her uncle's ranch in the desert. When her uncle Jeb (William Hurt) discovers her there, he takes her to his underground hideout, a formation of tunnels converted to living quarters for himself, Melanie's kid brother Jamie, Love Interest #1 Jared (Max Irons, Son of Jeremy), Love Interest #2 Ian (Jake Abel), and a whole host of other humans making a new life for themselves as wheat farmers who live in a cave. 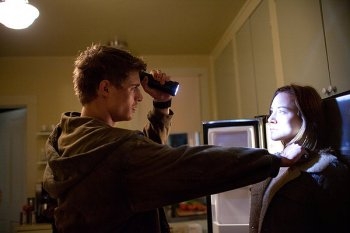 She's not sensitive to light, you're getting it confused with that other movie.

Here's where things get a little messy. Jared is in love with Melanie, and Wanderer isn't quite sure how to feel about that. Then Ian falls in love with Wanderer, which is a situation Melanie thinks is icky and gross, but all she can do is yell at Wanderer whenever she starts making out with Ian. We hear Melanie's internal dialogue in a tinny, echoed narration that overpowers every other sound in the film. Remember how heavy and prominent Bane's voice sounded in The Dark Knight Rises? It's kinda like that, except it never fucking ends. In fact, Melanie's voice over does all the work of the film's target audience.

The film says these things so you don't have to, which would almost be convenient if it didn't cause the audience to talk back at the narration like it could hear them agreeing with it.

Once the film finishes setting up the plot, it comes to a screeching halt in the caves when it realizes there is literally nowhere else for it to go. The Seeker makes it her mission to hunt down Wanderer, and the film checks back in with her every fifteen minutes or so to see how that's going. With all possible conflicts sidelined by a love square that works itself out without much fuss, the film is left with nothing ventured, nothing gained, no one to root against, and no one to care about. Then Diane Kruger shows up again to fire some guns. Calling this film's pace glacial would be an insult to glaciers (after all, they're melting faster every day).

In the space of about thirty minutes, The Host shifts from a Body Snatchers film designed by Apple Store geniuses to a western filmed on the one Firefly set Joss Whedon forgot to tear down. The dueling sci-fi and western backdrops lend the film a unique design when it remembers it has them at its disposal. The chromed-out Soul infrastructure clashes with the humans' more rustic aesthetic, and that right there is probably the most interesting thing about the entire production. 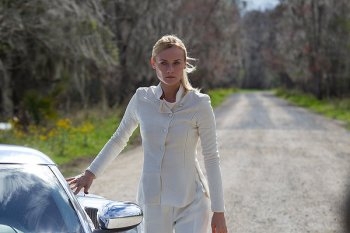 Where's Nicolas Cage when you need him?In fact, the one note I took throughout the whole film was that this could very well be a metaphor for Apple turning PC users into mindless iDrones. The world transformed by Souls is friendly, clean, antiseptic. Everything serves one and only one purpose or function. This is a world that features generic grocery stores with the word "store" written in gigantic font across their facades. It's the world Roddy Piper sees when he puts on the glasses in They Live, stocked with all the products from the grocery store in Repo Man. The human world, on the other hand, has a very DIY aesthetic. William Hurt builds a farm inside a cave by rigging up a bunch of mirrors that reflect the sun's light through a giant hole in the ceiling. Beds are carved out of rock and people make do with whatever they can steal from Souls. In this movie, humanity is basically a cowboy clutching a Microsoft Zune.

As was the case with most of the Twilight films, I get the distinct impression that screenwriter/director Andrew Niccol is just not taking Meyer's material very seriously. The design of the film is similar to his previous effort, but with absolutely none of the hamfisted verbal wit that made In Time ridiculous and fun in spite of itself. I genuinely believe we could have gotten something watchable out of this mess, but it's clear the only person even interested in trying is Saoirse Ronan. She's stuck playing two halves of the same character, and when she's not being jerked around by inane plot devices, she actually starts to disappear into the role.

While refreshingly free of the domestic issues found in the Twilight films, The Host forgets that that was the only thing Twilight had going for it in the first place. Here, we have a love triangle in which one guy loves a girl for her body while the other loves her for her brain, only to then find a way to give everyone what they want without resorting to murder. Oh and by the way, the film is not at all interested in developing this plot more than it has to. What could have been a unique twist on a typical romance story instead sounds like something Karl Pilkington made up out of thin air.

MINORITY REPORT: I find it very difficult to explain to people why I'm looking forward to this film and it's not because I'm a grown man watching teen girl movies. No, it's because the prospect of pronouncing Saoirse Ronan's name out loud is terrifying to me. The internet assures me it sounds like "Sur-shuh", but it's clearly "Sah-o-urs". This is what happens when parents get vowel-greedy. - Ian "Professor Clumsy" Maddison