World Of Warcraft's Most Epic Weapon 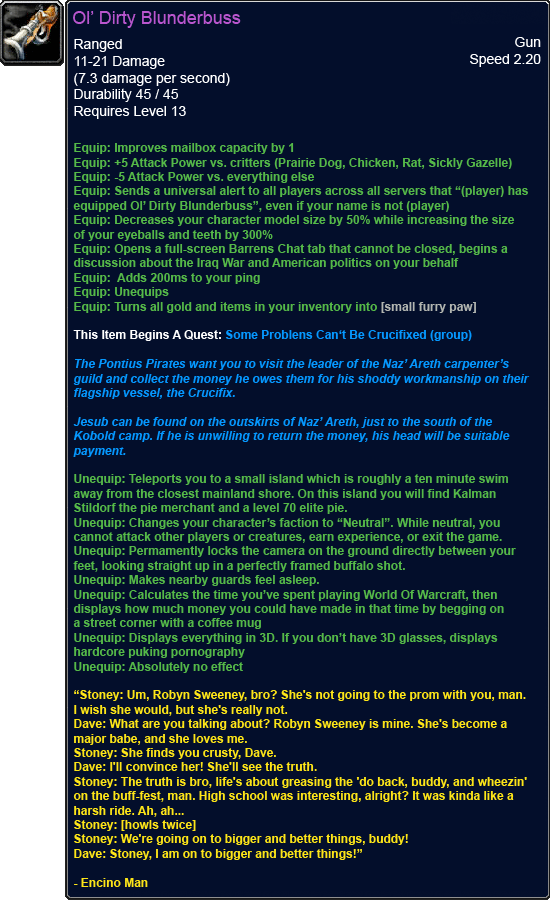 Command & Conquer 3: Kane's Wrath
When Kane's local drug store is out of razors, we all pay. 7/10

SunAge
Welcome to 1996, where this RTS would have only been slightly behind the curve in graphics, game mechanics, and production quality. 0/10

Dark Sector
Focus-tested and reworked from the ground up for your apathetic pleasure. 7/10

Viking: Battle For Asgard
Two hours of fun in a ten hour game. 6/10

Pinball Hall Of Fame - The Williams Collection
Revisit the greatest pinball machines of all time, with the added bonus of radiation. 8/10

Crisis Core: Final Fantasy VII
Manages to be better than Final Fantasy VII, earning a spot in the prestigious and exclusive "Every Halfway Decent And Comprehensible Video Game Released In The Last Ten Years" club. 8/10

Rainbow Islands Evolution
By associating itself with the rainbow, Evolution does more damage to the gay community than an army of indestructible laser robots fueled by the prayers of Fred Phelps. 2/10