We cover the full spectrum this week, from the wonderful Life of Pi to the idiotic Red Dawn. Along the way we check in with the surprisingly interesting The Collection, play catch-up with Trouble With the Curve and experience déjà vu with Great Expectations.

EXPECTATIONS: Judging solely from the book's sterling reputation and the film's gorgeous trailer, I'm expecting Life of Pi to land near Cast Away territory. Hopefully, this film will have a modicum of tact whereas that Zemeckis film had all the subtlety of a tack hammer. Also for what it's worth, Ian said I had to review this film because there's a chance the CGI tiger might talk. C'est la vie.

REALITY: It's very easy to be cynical about a film like Life of Pi. This is the very chum from which Oscar Bait is made, and yet at the same time this is the perfect example of why we've come to expect certain things when Oscar season rolls around. Life of Pi is a very poignantly told story with a hackneyed turn here and there, but it's also one of the most visually spectacular films of the year, boasting the most impressive CGI animal creations since a prairie dog winked at Indiana Jones. 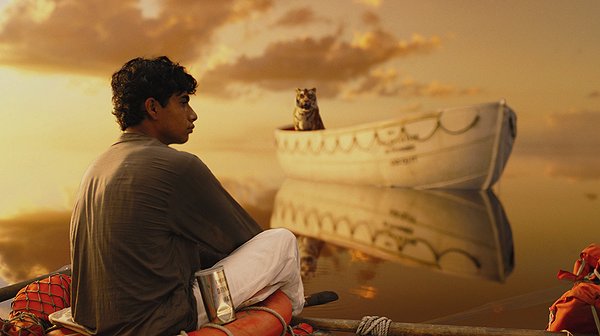 I'm not talking to you until you apologise for trying to eat me.

Pi Patel (Suraj Sharma) is an Indian boy of conflicted faith. He is brought up in the Hindu religion, but he quickly clings to Christianity and Islam in order to better understand the nature of God. His family is forced to shut down their zoo, leave India and move their collection of animals to Canada. Along the way, their ship sinks in the Pacific, leaving only Pi left to fend for himself in a lifeboat with a Bengal tiger named Richard Parker.

Naturally, Pi's "shipwrecked with a tiger" situation comprises the bulk of the film, and not only is it Life of Pi's major selling point, it's also one of the most cinematic scenarios you're likely to find this year. Director Ang Lee takes the gimmicky medium of 3D and applies it in ways that, while still gimmicky, prove how engaging it can be in the right hands. Lee's style is never ostentatious, and the way his images flow into one another makes Life of Pi's 127 minutes fly by.

All of this is surrounded by a framework of a middle-aged Pi (played by Irrfan Khan) telling his life's story to a young writer (Rafe Spall). Knowing that Pi makes it out of his ordeal alive in no way shatters the suspense and drama of his story. There are plenty of revelations and lessons learned along the way, so saying that Pi doesn't get eaten by a tiger is hardly a spoiler. Realistically, sure, Pi would have been torn to shreds in five minutes, but what the hell kind of story would that be? 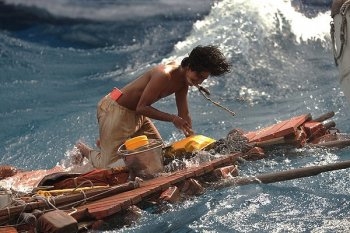 All this hard work. I'm just so tired of this Life of Pi TM.I'm kidding, of course, but that point actually plays into the film's ending. After a rescued Pi relates his story to the authorities, he's asked to tell them what really happened, because he's clearly making up all this nonsense about tigers and lifeboats. He replies with a second story, this one more plausible, yet infinitely more gruesome and heart-wrenching. How reliable is Pi as our narrator? Is he purposely embellishing his story, or is he just telling these people what they want to hear? Instead of trusting viewers to draw their own conclusions, the film then explains what we're supposed to think about all of this, including how to interpret it. "If it happened, it happened," Pi says. "Why should it have to mean anything?"

The real journey in this film doesn't involve either of Pi's versions of the truth; it's the spiritual journey Pi embarks on from day one. Pi calls himself a Catholic Hindu, but really he's more of a hopeful agnostic. First-time actor Suraj Sharma throws himself head-first into the character, making Pi every bit as convincing as the CGI tiger he's pretending to scream at. He watches in horror as his family's ship sinks, and yet his is not a flailing desperation like so many of the characters in Titanic; instead, Pi's acceptance of death is quiet, reverent even. (For a real double whammy, watch Life of Pi back-to-back with The Grey.) When a freighter sinks right before your eyes, what else can you do? It's heartbreaking to watch Pi slowly but surely surrender to God and the forces of nature, and the performance works beautifully even though we already know his fate.

Asking us to question which is the better of the two stories veers Life of Pi out of Cast Away territory and more into the realm of Tim Burton's Big Fish. We can question the veracity of someone's story a thousand times, but when the story is as rich and entertaining as Pi's, is the truth really that important? Maybe a zebra never broke its leg falling into the lifeboat; maybe Pi's boat never actually landed on a carnivorous island populated by meerkats; maybe Richard Parker is just a metaphor with fangs. It made for a compelling story, and that's all that matters.

MINORITY REPORT: I find it amusing that Ang Lee once directed the finest superhero film ever made and is now competing in a year that is full of them with a story about an Indian boy making friends with a tiger on a lifeboat. He already conquered the popular stuff, so let's see if he can make something this outlandish into something just as popular. - Ian "Professor Clumsy" Maddison