The Hobbit: An Unexpected Journey; A Christmas Story 2; Sightseers

EXPECTATIONS: I haven't seen Kill List, but director Ben Wheatley definitely caused a bit of a stir with that one. Now he's back with Sightseers, a comedy about British holidaymakers who enjoy murdering people. Now that's something I can relate to!

REALITY: I enjoy taking holidays in the countryside. Why, only recently my girlfriend and I returned from the Isle of Wight where I spent a chunk of one afternoon stuck up to my waist in a clay bog. One day previous to that, an employee of the National Trust drove his truck into my car. However, I escaped the bog and the damage to the car was negligible and two trips to the dry cleaners put the whole thing to rights. The point I'm making here, rather candidly, is that this is how the British holiday works. You go out to where the mud and the museums are, put your wits and your relationship to the test and return home in need of another holiday. Sightseers captures this perfectly and manages to be the funniest film of the year at the same time. 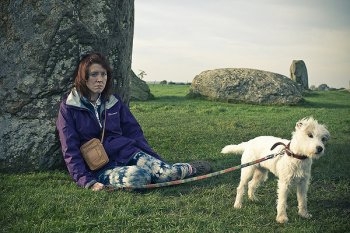 All the joys of the English summer.When Tina (Alice Lowe) and Chris (Steve Oram) decide to go on a caravan tour of the historical sites around Yorkshire, Tina is surprised to discover that Chris is a violent serial killer who will end a stranger's life on a moment's notice with only the slightest provocation. Tina figures he'd like to see her do some killing too, so she starts piling up more bodies and their relationship starts to buckle.

Written by the two leads, Sightseers is a brilliantly hilarious examination of the mundanities of life. Chris is exactly the kind of person who would write this entry into the IMDb trivia page of his own movie. He's the kind of boring guy you usually bump into on these sorts of holidays, sporting his cagoul and subtly abusing his girlfriend. He obsesses over details and gets very angry over litter and graffiti. He's the kind of person who might frequent the forums on this very website, except instead of being passive-aggressive, he bludgeons the source of his agitation to death with a blunt object.

Meanwhile, Tina is actually more obviously psychotic. Her behaviour is often depicted as being unusual and the concept of murder is a real eye-opener for her. When she kills people, it is quick and somehow distant, while Chris's murders are brutal, blood-soaked affairs. Somehow, this lends her crimes a coldness that Chris's don't have. His acts of violence feel more intimate, born from some hypocritical idea of patriotism. He thinks he's improving the country by wiping out these people and he considers his motives more pure than those of Tina, who murders out of anger or a desire to impress. Of course, his own impulses don't really come from anything greater than anger either, but his attempts to justify these actions to himself are an important part of his hypocrisy. 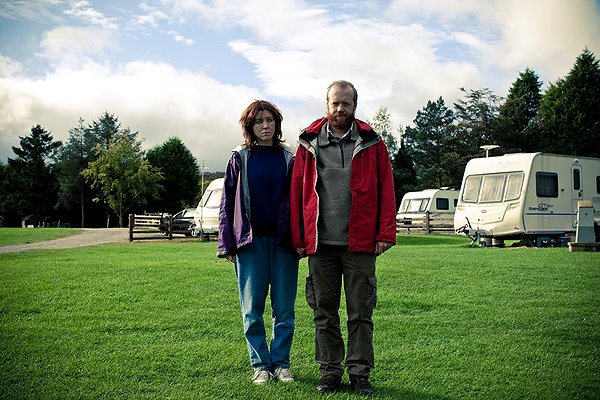 The real heart of the film is the relationship between these two oddballs. It may appear romantic at first, like a modern-day Bonnie and Clyde cutting a swath of destruction across the country. But after a while we start to see the subtly abusive undertones. Chris is determined to change Tina into his ideal, subversive woman and is perturbed by her independent streak. She sees him as an opportunity to escape her insular life and so she does what she thinks will please him. In the end, a single act empowers her, but I don't want to spoil it.

The only thing that sets Sightseers involves the techniques used to bring it to the screen. All too often the film will revert to a time-lapse montage ending with a cut to black and long sound lead into the next dialogue scene. It's as though Ben Wheatley isn't entirely comfortable with anything that doesn't have dialogue. You'll find yourself saying "cue montage" in your head every time it happens. It's a setback that makes you think this could have been equally good as a TV miniseries. The script and lead performances are so strong (especially that of Alice Lowe, best known for Garth Marenghi's Darkplace), however, that you can't help but be taken by the whole thing.

MINORITY REPORT: I also returned recently from a jaunt in the country. I moved from village to village, sampling the local tipple at every stop. After a short visit in each local tavern, I would stagger to the nearest bush and wait for willing damsels to pass by. All the ones who did so were already dead, I assure you, officer. - Montague "Legally Sane" Smythe