The Losers; The Back-up Plan

We've seen a lacklustre week at the movies, probably due to pants-wetting anticipation for next week's release of Iron Man 2. That said, we have filled our quota for obscure comic book adaptation of the week in The Losers, ably reviewed by Joseph "Jay Dub" Wade. We've given him a week off romantic comedies because he's on suicide watch; luckily Robert "Macrame_God" Seeders was on hand with his bag of tricks to endure The Back-up Plan.

The Losers, a.k.a: The Explosionists: The Explodinest Show on Earth!

EXPECTATIONS: All the marketing surrounding The Losers makes it look like an eager-to-please knockoff of The A-Team. Considering THAT movie is due out in a month or two, I wouldn't be surprised if Warner Bros. released The Losers in April as a preemptive strike in hopes of eating up as much of the "Ex-military team goes on a mission" film market as it could. Hey, as long as it delivers some silly, explosive fun, I'll probably have a good time with this one.

REALITY: The Losers is one of those movies that seems tailor-made for the Channel 3 Sunday Matinee. It's a moderately fun action romp with a pretty good cast and just the right mix of explosions, sex appeal and snappy one-liners to keep you from changing the channel to whatever boring crap the other networks run on Sunday afternoons. Next to golf, The Losers probably looks like Dawn of the Die Hard to Kill Bill and Ted's Bogus Journey. 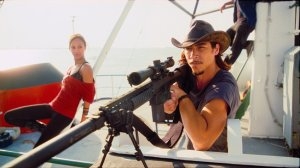 Better than golf? You decide.When we first meet The Losers, they're a crack Special Forces strike team, led by Col. Clay (Jeffrey Dean Morgan), on a mission in Bolivia to blow up some bad guys. When the team is betrayed by a mysterious voice over the radio, they go into Bolivian exile, with the CIA believing them dead. Then along comes Aisha (Zoe Saldana), who offers them the chance to redeem themselves by killing the mysterious voice, a top CIA guy named Max (Jason Patric). A number of kinda-sorta wacky missions ensue in which the Losers steal Max's money, hack his computer, and blow up all kinds of stuff along the way. It sounds simplistic when it's worded that way, but honestly that's all the movie really aspires to, so why dress it up?

The film's faithfulness to its comic book roots proves to be both its greatest asset and its biggest shortcoming. The Losers is based on the first volume of the DC/Vertigo book of the same name, and director Sylvain White takes every opportunity to toss in a visual flourish designed to remind you that you're watching a comic book and that you really shouldn't take any of it too seriously. Each Loser is introduced with a comic rendering of his or her likeness; a handful of mildly implausible stunts keep things visually interesting;and then there's the egg-shaped superbomb that Max refers to as "The Snuke." He claims this stands for "Sonic Dematerializer," but I'm willing to bet it just means "Stupid-looking Nuke." All of this keeps the movie going at a decent clip without ever getting bogged down in narrative juggling, and it generally keeps the mood of the film light and fun.

Shavoooooosh! Ka-BOOOOOM! That's what bazookas say.However, this is also the film's biggest problem because it ultimately makes everything feel incredibly slight. We watch a Snuke vaporize a small island as Max looks on in vague approval, but what he intends to do with his remaining Snukes is never said. It would be great if the Losers then decide they need to take down Max before he uses another Snuke, but they have no idea he even has them. It's merely by a series of happy accidents that they're able to foil his evil plans to do ... something. We're never really told what his evil plans ARE. Aisha seems to know what Max is up to, but she's more concerned with blowing him up than stopping his plan.

It feels like screenwriters Peter Berg and James Vanderbilt decided that because they were making an action movie based on a comic book, it would be acceptable to phone in the script rather than working it over a couple times. What's at stake isn't sufficiently established, the action scenes feel completely interchangeable, and it seems as though each character was written sans personality. I guess they were hoping the actors would step up and invent their own characters on the spot. Now, the entire cast appears completely capable of doing that, but some of them clearly just refused.

On that front, Jason Patric fails to give Max any character traits, other than every villain's impulse to randomly off henchmen and interns who look at him the wrong way. In fact, Patric is so dry in the role that I'm not even sure he's playing a character. The most we learn about him comes from Aisha, who says "When Max takes an interest in something, people die and world maps get redrawn." So he's an impulsive Lex Luthor who somehow runs the fucking CIA. Okay, I guess. That would actually be a fun villain if that were the villain we got. Instead, we got Jason Patric constantly telling Henchman Wade (no relation) to kill all the new employees.

The only actor who does give his character a personality, and subsequently the one who completely steals the movie, is Chris Evans. He plays tech guy Jensen much like he played Johnny Storm in Fantastic Four and whatshisname in Push Based on the Comic X-Men By Sapphire. Evans is heavy on the snark and attitude, but at least he can hold his own in an action scene. If his performance here offers any indication, he should be more than capable of pulling off Captain America next year.

In fact, much like last year's Push, The Losers will almost certainly be forgotten once the summer blockbuster season gets into full swing. There's just not enough here to help it stand out in a year already packed to the gills with movies about ex-military teams pulling one last job. It's kinda fun in the same way that a Journey song is kinda fun if you just ignore all the stupid, stupid lyrics.

If the movie is good for anything aside from Evans' comic relief, it's for giving you a PG-13 eyeful of Zoe Saldana. Not only is she already pretty easy on the eyes, but also she obviously has no problem filming a shootout in nothing but her undies. I kinda wish the movie had made better use of this talent, but I guess there are only so many times you can get away with that one. It would be going too far over the top to have her firing a rocket launcher without a top.

The Losers is the Non-Superhero Action Movie of the Week, which is probably exactly how they'll promote it when it shows up on TV next year.

MINORITY REPORT: Oh hellz yeahz! Now you're talking my language, Wade! If stuff explodes as good as you say it does, I'm there! David "Data Core Devil" del Vacote III