EXPECTATIONS: Ah, we Brits sure do love a good costume drama. Throw in a young up-and-comer who's keen to challenge himself and you've got yourself a hit with the old-lady demographic. That said, most of these things usually end up on TV, so only time will tell if Bel Ami actually belongs in cinemas or if they're just making an early push to get overlooked at the Oscars next year.

REALITY: My primary concern, that Bel Ami would feel un-cinematic, was unfounded. Bel Ami is cinematic and even quite watchable at times. Unfortunately, it is not a very pleasant cinematic experience, filled with unlikeable characters doing despicable things to each other to no apparent end. To say that Bel Ami is boring would be inaccurate, but to describe it as enjoyable would be laughable. 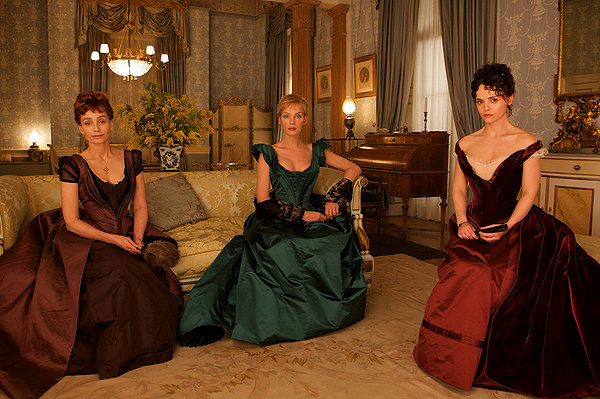 Is that an Oscar in your pocket or are you releasing us in March?

Arriving in Paris after a stint as a cavalryman in Africa, Georges Duroy (Robert Pattinson) happens upon fellow soldier Charles Forestier (Philip Glenister), who invites him round for dinner to meet his wife Madeleine (Uma Thurman); the editor of his newspaper Rousset (Colm Meaney); his wife Virginie Rousset (Kristen Scott Thomas); and a young friend of theirs named Clotilde (Christina Ricci). Wasting no time in snagging a job and wangling his way into bed with every woman he meets, Duroy soon finds himself replacing Forestier as Madeleine's husband and becoming embroiled in a political plot with Rousset and his colleague Laroche (James Lance) from which they are all set to profit greatly; except Duroy has been left out, leaving him with a taste for white-collar revenge.

For a film that pretends to be character-driven, Bel Ami spends much of its running time focusing on plot-advancing dialogue scenes with a bit of sex thrown in to keep your dad interested. This wouldn't necessarily be bad if we could care one jot about any of these characters, their motives or their relationships besides seeing just how much of a shit one can be to the other. Even Clotilde, who is supposedly the emotional centre of the film, is simply stringing Georges along and mocking him behind his back, spreading gossip and proliferating his titular nickname of "Bel Ami," which I think is French for "Team Jacob". 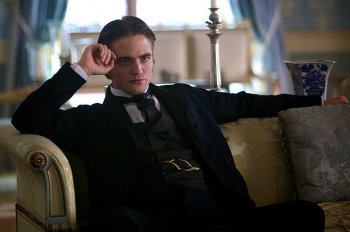 This is what humans look like when they're unhappy, isn't it?It seems that the only reasons we might have for siding with Duroy over any of the other despicable people in this film is that he's young and handsome and doesn't want to be poor like his family. It's a lot like an Italian Western in that regard, where the audience is expected to choose the hero by deciding which character they'd most like to see get rich. The problem is that we never have any reason to revel in the joys of any of these people. They are, each and every one of them, both harbingers and victims of misery. A scenario like that could be played for unsettling creepiness, but here it feels more like a romanticisation of lethargy and political disinterest.

Co-directors Declan Donnellan and Nick Ormerod, here directing their first feature film, do very little with such a great cast. It's easy to forget how good of an actress Uma Thurman can be after some of the roles she's taken in recent years, but here she's every bit as good and as strong a presence as she was in Batman and Robin (a film you don't like and I do, so there), Gattaca or Pulp Fiction. Everyone else gives sterling support as well, and it's nice to see Philip Glenister and James Lance finding more film roles. Glenister is best known as Gene Hunt from the original Life on Mars, (he was famously replaced with Harvey Keitel for the American version) ,and you will probably know Lance from Bronson, where he plays a camp Manc art teacher who helps carry the film's third act, British readers will also know him from every single TV comedy that has been broadcast since the early '90s.

That brings us neatly to our lead, Robert Pattinson, or R-Patz as the cool kids like to call him. He's such a bizarre-looking creature, and it's almost compelling enough to watch him struggle to contort his face into approximate facsimiles of human emotions. In the hands of another actor, Georges Duroy might have been charming, but there's an insincerity in Pattinson's crooked smile that makes him hard to trust as a leading man. I'd love to see him become a modern-day Vincent Price, becoming the face of horror whose very presence guarantees a spooooooooky time, but film studios and actors don't really go in for that kind of thing these days, leaving Pattinson to struggle as a romantic leading man, where I think his mileage will prove very limited.

Having said that, it is abundantly clear that Pattinson is very interested in building a persona for himself to move away from the teenage Twilight crowd, often deriding the franchise and its fans openly and even deliberately taking roles to mess with his audience. While Bel Ami is largely a misfire, it certainly helps to add to this persona that Bob Patty-cakes is constructing. To that end, I suppose it makes sense that the whole film is simply about horrible people doing the kind of things that horrible people do to each other. I can't help but wonder why an actor so young is deliberately trying to steer his career in such a way to begin with, especially as such a direction takes a pretty extraordinary talent and a naturally outrageous persona to begin with. What I'm saying is that Robert Pattinson is no Nicolas Cage, as much as he'd like to be, and Bel Ami is no The Bad Lieutenant: Port of Call - New Orleans, as much as it would like to be.

MINORITY REPORT: R-Patz is in a unique position right now. He's done all the Twilight-ing he'll ever do, so now he can do anything he wants. Instead of stretching himself as an actor, though, he seems hellbent on actively making his fans regret ever typecasting him. Not that I'm complaining. - Joseph "Jay Dub" Wade