EXPECTATIONS: Within a span of one movie, Elizabeth Olsen's status in the public eye seems to have skyrocketed from "Hey, did you know there's a third Olsen sister?" to "Hey, did you know there's a third Olsen sister and I heard she's pretty good in that movie I didn't see?" In any case, Olsen has real talent, and she's not afraid to take challenging and interesting roles. This alone is reason enough to get me interested, but then we factor in that this film is selling itself on the fact that it's presented as a single shot, one fluid motion. The movie is using its cinematography as a selling point, in trailers and everything, like it actually respects the audience enough to think they might care. Who does that? 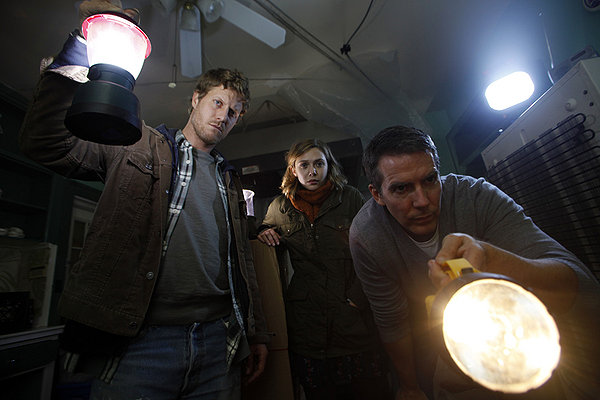 Yeah, there's definitely a review down there.

REALITY: A few weeks ago, The Girl With The Dragon Tattoo won an unexpected Academy Award for Best Editing. And by "unexpected," I mean "the guys holding the trophies didn't even know what to do with the damn things." In a beautifully awkward moment, Kirk Baxter and Angus Wall, whose names you will forget by the end of this sentence, stood on stage babbling inanely until mercifully one of them said the greatest words in Oscar telecast history: "Let's just get out of here." The reason I make this point, besides the fact that it's hilarious, is that the editing in The Girl With The Dragon Tattoo isn't particularly great. It's as if they were giving them an award based on how good the trailer was. This is simply further evidence backing a theory that many of us have had for a long time: No one in Hollywood actually knows what good editing is.

And so it is that Silent House, an otherwise painfully mediocre movie, has an artistic edge to it that makes it just pretentious enough to be hailed as visionary by your friend who refuses to see 3D movies because they're "too gimmicky." Silent House's cinematographic hook is that it's presented as if it were one continuous single shot, making it look like the events of the film were captured in real-time. What this means for the audience is that we get to experience the true-to-life emotions of 85 minutes of absolutely nothing happening. We get a plot that absolutely refuses to move, because then we couldn't include more shots of Elizabeth Olsen in the dark. 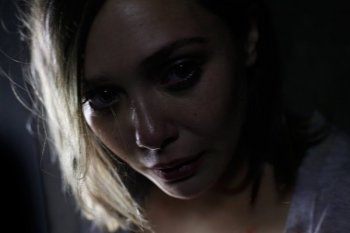 Wait, which one of the Olsen twins are you again?The fifteen minutes of story in this 90-minute film follow Sarah (Olsen), a young woman who is fixing up her family's country home with her father John (Adam Trese) and her Uncle Peter (Eric Sheffer Stevens). After an encounter with an old friend which is too awkwardly written to be creepy, Sarah finds herself locked in the house without power or phone and is stalked by a man who is literally cast on IMDb as "Stalking Man." As she runs around the house from room to room, all of which are conspicuously kept dark enough to hide the spots where they actually turned off the camera, she discovers a family secret (in the last ten minutes of the movie) that's really impressive and shocking to anyone who hasn't seen Black Swan.

What we wind up with is a film that has point A and point C, but has no idea where point B is supposed to be. We're given seemingly endless points of Sarah running and hiding, and the tension is there, but there's never any payoff. Each individual segment is like this, and so it shouldn't come as a surprise when the whole movie comes crashing toward an anticlimax. Olsen herself puts in a fine performance, but nothing in this film is worth sitting through the intentionally bad camerawork and hurry-up-and-wait pacing. 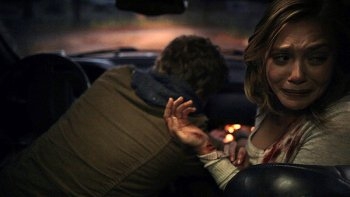 Just drive away from the review, it'll never catch us.So let's talk about this single-shot concept the film loves so much. It serves a purpose, there is that. Last week I talked about the use of found-footage as a commentary on audience voyeurism. This week is basically the same thing, except it's presented in a more relevant, and slightly more disturbing fashion. The audience becomes a voyeur, watching the bad things happen, and one of our four characters is also a creepy voyeur. You know how every once in a while someone will say that colors are relative, and your red and my red could be totally different, then they act like they're the first people in the world who have ever come up with this idea? That's what this movie is like with its message.

I'll give it this: Silent House really does have some great editing. With a few glaringly obvious cuts, it actually seems like a single shot. But let me then ask: So what? The movie has great editing, great. When was the last time you told anyone "Hey, you should see that movie, the editing is awesome?" I'm not saying editing isn't important or that people shouldn't care about it, it's just that usually when we praise editing, it's in the case of a movie like Hot Fuzz or Raging Bull, where there's something else of note going on besides it. Editing is meant to support the movie, not be the movie. Without any substance to back it up, Silent House is basically just a student film, given to us by that guy in the class that everybody hates.

MINORITY REPORT: I haven't seen this, but I have seen the Uruguayan film The Silent House of which this is a remake. It seems like they basically took all the same contrivances and delivered them with the same gimmickry. There are some interesting ideas in there, with the camera seamlessly passing from "invisible" camera operators to the POV of supporting actors to mark changes in the lead character, but that doesn't help alleviate the feeling that the film is cheating with its plot twists and is ultimately emotionally barren. - Ian "Professor Clumsy" Maddison

EDITOR'S REPORT: I appreciate all the attention given editors in this review! However, I'm in no rush to see Silent House, given how much I hated co-director Chris Kentis' previous effort Open Water, the excruciating saga of two grating sea-stranded characters who bobbed and babbled and just wouldn't die. This is the last guy I'd trust with another minimalist thriller. If you're intrigued by the single-shot methodology and you haven't seen Alfred Hitchcock's Rope, I can say with confidence that it offers a more essential viewing experience. -- Andrew "Garbage Day" Miller