EXPECTATIONS: The hip thing to do these days is to pay tribute to your favourite literary figures by making entirely fictional films about their lives filled with intrigue, thrills and romance. The Raven aims to give this treatment to legendary American wordsmith Edgar Allan Poe by pitting him against a crazed serial killer who's obsessed with emulating his grotesque works of art with real lives at stake.

REALITY: The Raven is a difficult film to classify. I wouldn't describe it as a horror film even though it draws on horror sources; I wouldn't call it a serial killer thriller as it feels too much like an adventure story; and it certainly shouldn't be considered a biopic because it is entirely fictional. For all of its inconsistencies in pacing and tone, The Raven is a thematically interesting dissection of modern audiences' approach to horror storytelling. Unfortunately, if the points it makes are true, then very few people will actually recognise them. 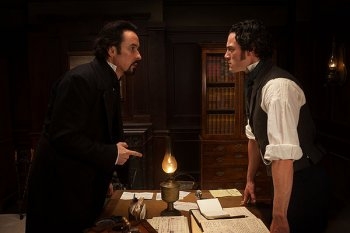 No, it's not Holmes and Watson, it's Poe and Fields: Crime Fighters Extraordinaire!Struggling to reclaim the success of his early works, infamous poet Edgar Allan Poe (John Cusack) is approached by Inspector Fields (Luke Evans), who is investigating a pair of grisly murders that closely resemble Poe's works. In assisting the police, Poe is brought deeper into the grim plot as his intended fiancée Emily Hamilton (Alice Eve) is kidnapped, much to the chagrin of her psychotic, gun-toting father (Brendan Gleeson). Now he's locked in what the trailer voice would describe as "a deadly game of cat and mouse" to "save the woman he loves." IN A WORLD WHERE AUDIENCES TAKE THINGS TOO LITERALLY... no, wait, that's the real world.

You see, that's the whole point of The Raven; taking the exasperation of an under-appreciated author and projecting it back at the audience. Where once a horror writer would be applauded for building a sense of dread through the power of suggestive language, most modern horror is built by a committee of people deciding what gory set-pieces would look totally awesome and radical to the max (people still say that, don't they?). This way of thinking is what motivates the antagonist of The Raven: The villain thinks Poe's stories of violence are bodacious and simply wants to replicate their horrific minutiae without ever giving thought to their messages and meanings.

I like to think that I'm a strong advocate of the "death to literalism" approach to film criticism, in that the worst response to any work of art is to look at what it presents literally and merely absorb it, ignoring all subtext. It's nice to see a film that firmly agrees with me, even if that agreement is meaningless given the "death of the author" approach (which is the foundation of all worthwhile criticism) that the film also agrees with, as proven by the actual on-screen death of Poe (that's not a spoiler, you already knew he was dead). As someone who often wrote criticism himself, Poe might appreciate the idea of having to die to leave his works to the audience, for better or worse.

Poe looks at the other men, wondering if he should be the one to mention the elephant in the room.

All of this self-critical thought and ponderance could have been Earth-shattering if it were presented in a more entertaining way. Early scenes of gore are explicit, but cold and distant. This feeds into the central idea, but it doesn't make for particularly engrossing viewing. It also feels at times like director James McTeigue couldn't settle on one single element to focus on and decided to throw a bunch of other crap in there wherever he could. There's a little bit of Macbeth and a little bit of Sherlock Holmes crowbarred into the narrative in distractingly indirect ways. More emphasis on the poetry and imagery of the stories would have set the tone beautifully, as proven by one of the most entertaining scenes being Cusack reciting the final passage of The Raven and then criticising amateur poetry with beautifully generous prose of his own, but we never hear a word of Macbeth when the investigation leads to a local production of the play and we don't hear an awful lot of Poe's other works. 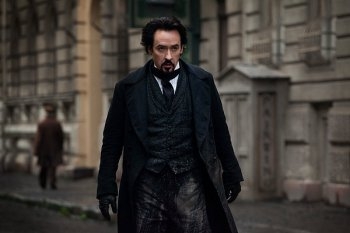 Edgar Allen Poe, not to be confused with Cameron Poe who is from an entirely different John Cusack movie.With various horseback chases and shoot-outs with unseen assailants sprinkled in to keep things rolling, there comes the creeping feeling of inconsistency. What is this film trying to be besides a statement on the relationship between art and criticism? An exciting action-adventure-comedy-horror-romance-thriller? If it narrowed its focus a little, it could have been infinitely more effective. That's not to say that The Raven is especially bad or messy, but it certainly misses its mark by a fairly sizable margin simply by trying to do too much.

Something that helps to keep this film's chin up, however, is the wonderful central performance by Cusack. There's a brilliant unpredictability to him at all times, diving from quiet and mournful to outrageous and manic. You can never tell just how far or deep into the moment he is going to go. There is both a madness and a safeness to his Poe, which makes for a very interesting and surprisingly believable protagonist.

It could be that I am predisposed to like this film simply because it casts film criticism in a positive light -- indeed, it may be the most pro-critic film I have ever seen. The fact that it falls short of some of its goals does make for a slightly wavering experience, however, and it might fall on deaf ears with certain audiences, making it a hard sell on the whole. But it might encourage more critical thought amongst cinema-goers, which is an effort I can only applaud.

MINORITY REPORT: Just think, if this had come out five years ago and become a huge hit, John Carter might have become a detective story about Edgar Rice Burroughs trying to track down his missing uncle, with nary a Thark or Woola in sight. The nerd rage would have been horrifying. - Joseph "Jay Dub" Wade