Jeff, Who Lives at Home

EXPECTATIONS: Look, it's our old buddy Ed Helms. He couldn't do much to salvage The Lorax, but he worked wonders in last year's Cedar Rapids. Helms is capable of delivering a tremendously affecting performance, so I'm looking forward to seeing how he plays off of Jason Segel. Can directors Jay and Mark Duplass do for them what they did for Jonah Hill? I'm willing to bet they can.

REALITY: For a film starring such high-profile comic talent, Jeff, Who Lives at Home is a profoundly sad film. It's not sad in any overbearing, maudlin sense; it's a comedy filled with desperate, broken characters who seem doomed to live their lives in misery all for a lack of trying. What I'm saying, I suppose, is that this is intensely familiar territory. But it's not the situations that feel familiar; it's the emotions they elicit. That's where this film really connects. 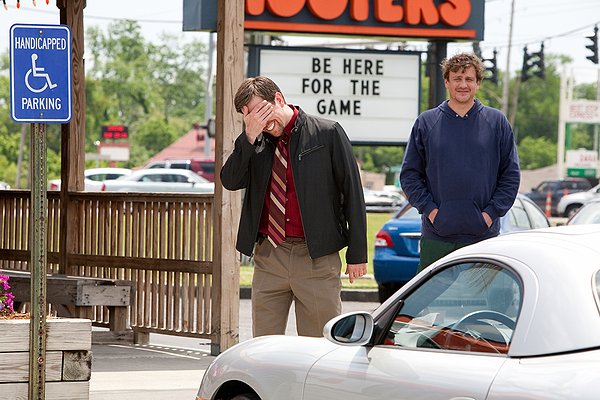 Ohhh, hilarious antics involving a car. I bet there's a tiger in there.

Jeff (Jason Segel) is a 30-year-old pot smoker living in his widowed mother's basement. Convinced that the M. Night Shyamalan film Signs contains the secrets of the universe, Jeff believes that everyone and everything has a purpose, including a random phone call from an angry man looking for Kevin. Jeff's search for Kevin leads him to his brother Pat (Ed Helms), a miserable paint salesman whose marriage is quickly falling apart. The two spend their day spying on Pat's wife (Judy Greer) to see if she's having an affair. Meanwhile, their even-more-miserable mother (Susan Sarandon) spends her day at the office trying to smoke out the identity of her secret admirer.

After a while, Jeff almost feels like an afterthought in his own film. He's the titular character, sure, but Jason Segel plays him as such a blank soul that when he finally discovers his purpose in the third act, it seems to come out of nowhere. Of course, Jeff is also the type of person who finds deep spiritual truth in a film as on-the-nose as Signs, so I'm willing to grant him the benefit of the doubt. Jeff is tired of being a miserable 30-something living in his mom's basement, and that tired desperation carries him through the film. Segel plays Jeff's tired desperation so well that one begins to wonder how much is acting and how much is Segel growing weary of constantly playing this type of character. (He's been trying to leave How I Met Your Mother for years; this film is clearly Segel's cry for help.) 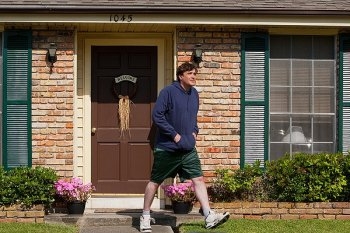 Spoiler: the house burns down while he's out.While Jeff's spiritual outlook is what drives the film forward, it's Pat's insecurities about his wife that occupy the bulk of the plot. Ed Helms plays Pat as a thoroughly unrepentant ass. He's so driven by success and the illusion of being happy and well-adjusted that it has destroyed his concept of what it actually means to be happy and well-adjusted. He plays up taking a bored coworker to Hooters as an important business meeting, and thinks nothing of blowing his savings on a Porsche, which he's never really allowed to enjoy. Pat is the character most in need of fixing, and Helms plays him as a man who's utterly lost. This is a side of Ed Helms we're not used to seeing, but he pulls off the less savory aspects of Pat's character with ease.

At the same time, Susan Sarandon turns in an equally strong performance as Sharon, Jeff and Pat's mother. Trapped in an office cubicle for much of the film, Sharon balks at the notion of having a secret admirer, but finds the prospect secretly thrilling. Even while admitting that she hates her two sons, Sharon is the film's proof that everyone deserves a chance to be happy. At her age, dysfunctional manchildren should be the least of her worries.

In anyone else's hands, Jeff, Who Lives at Home could have gone off the rails with wacky situations and over-the-top shouting matches about absolutely nothing. The Duplass brothers seem to realize this, so they let the comedy evolve from the film's plethora of awkward situations. Yup, it's one of those films. While 'mumblecore' is a word I loathe even having to type (admittedly not a daily occurrence), as a burgeoning genre it's certainly finding its place. The exchanges between Jeff and Pat feel real, and the sympathy the two generate feels earned. Set against the washed-out backdrop of Baton Rouge, Louisiana, this family's story is much livelier than the visual presentation would suggest.

It seems as though Jay and Mark Duplass have finally figured out what it takes for mumblecore to appeal to a wider audience. Deep-seated familial conflict will carry a film perfectly well, but cast two comic actors who have spent years playing out these same situations on prime-time sitcoms, and suddenly you have a film that not only feels natural and honest, but also one that can easily break the tension with laughs when things get too heavy. Jeff, Who Lives at Home strikes that perfect balance between drama and humor without ever becoming mawkish or silly. I don't know why that became such a difficult thing to manage, but the Duplass brothers have it worked out to a science.