I too didn't think much of The Collector at the time, but as we gain time and distance from the carpet-bombing of Saw films and their knockoffs, I've come to appreciate certain aspects of The Collector, especially when it's contrasted with the Saw franchise:

The Collector certainly left things open for a sequel, but considering its disappointing performance at the box office (it earned $9 million on a $3 million budget), that possibility seemed to narrow by the year. And yet here's The Collection, announced by posters and trailers that connect it to Saw and ignore the fact that it's, y'know, a sequel to a film that's only three years old.

This is either an off-the-shelf cash-grab, a wild departure from The Collector, one of those weird reboot-sequels in which the studio takes another shot at a concept executives thought would do better or all of the above. No matter what, I'm not expecting much.

REALITY: It's been exactly 20 years since Home Alone 2: Lost in New York, and when we catch up with Kevin McAllister in The Collection, he's been warped by sadism, emotional abuse at the hands of his museum-curating father and a childhood of annual abandonment. Now, he toils away at the abandoned Hotel Argento in the industrial district of some unnamed city, constructing elaborate traps for anyone unlucky enough to invade his home turf. 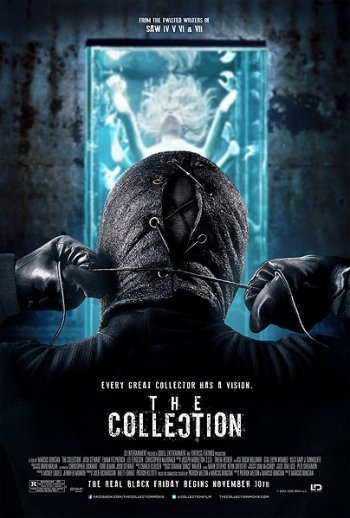 You see, the "real" Black Friday was actually a week later, because you'd rather go shopping than watch this movie.That's as good of an explanation as any for The Collection, whose silent, masked killer has only the vaguest of motives, superficially defined in the film's closing moments, and improbable means to execute some nebulous master plan.

This illogic, like the plot itself, is an extension of The Collector: Our scrappy hero-burglar Arkin (Josh Stewart, again looking like a dopey Sean Penn) is at it again in a surprisingly direct sequel. For those of you who a) don't remember or b) never saw The Collector, that film ended with Arkin caged.

Surprisingly, The Collection picks up the plot almost immediately after The Collector, and in the interim, the villain has put Jigsaw to shame by renting some warehouse space, converting it to an underground dance club and installing a teen-mincing floor-width thresher. Into his trap wanders Elena (Emma Fitzpatrick) and her friends. Because you can't spell "screenplay" without "pee," Elena strays from the pack in search of a bathroom, leaving the dance floor just before the massacre begins. In this bathroom, she finds not a toilet (quoi?) but one of the villain's signature storage trunks. She pops the lock (pourquoi?), Arkin rolls out and through a convoluted series of events, Arkin finds his way out of the warehouse while Elena finds her way into the trunk. This all happens in the first ten minutes.

Unfortunately for the villain, Elena's father (Christopher McDonald) is rich enough to hire a team of mercenaries to retrieve Elena, and guess who they tap to lead them to the killer's lair? If you've seen Aliens or The Descent: Part 2, you'll quickly arrive at the answer. What's surprising is how eager Arkin is to exact his vengeance, given how much abuse he suffers in The Collector and this film's opening sequence. With a missing tooth, a mangled hand, a broken arm and a lacerated body, he barely gives a second thought to becoming our villain's Marv. Hell, he even sort of looks like Daniel Stern.

During the following hour, you're asking yourself: Who pays the hotel's power bills? How many explosions can a crumbling building withstand? How do all of these people go missing? Why can't Batman be more like Arkin?

In other words, The Collection is a superficially bad movie that barely makes a lick of sense and I enjoyed every batshit minute.

Co-writers Patrick Melton and Marcus Dunstan, who returns to the director's chair once again, toiled on the screenplays for Saw IV-VII, which required them to expand on the ridiculous mythology set forth in Saw III. As Saw sequels go, Melton and Dunstan are responsible for a bona fide travesty (Saw VII), two humdrum entries (Saw IV-V) and a blunt-force satire (Saw VI).

The creative team behind The Collection could pack a Rolodex full of visual and narrative touchstones. Like a riff on the apocalypse-film pastiche Doomsday, which McCurdy also filmed, The Collection is a bad-trip zoetrope of elements from Italian gialli, Korean revenge films, the new wave of French horror, The Exterminator, Silent Hill games, zombie flicks, A Serbian Film, The Silence of the Lambs and "the 'Star Wars' of action movie." 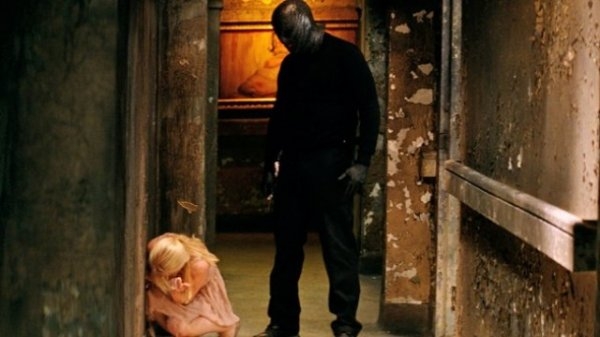 All you need to become a movie serial killer is a creepy mask and a whole bunch of rusty shit. Even your walls should be covered in rust, just to be sure.

The leather-clad killer appears from a plume of blue fog with an assault rifle and attack dogs, forcing the protagonists to scramble backward down a red-light service passage. Characters work through a maze of decaying hotel hallways adorned with disturbing paintings. A flickering light bulb yields a long-lapse strobe, so we can observe the killer materialize from nothing before he moves closer to Arkin. The audience gasps. You see what I mean.

As writers, Melton and Dunstan resist developing a mythology for The Collection, carving a barely comprehensible nightmare-logic narrative -- a refreshing mirror of their work on the Saw series, which relied on retcons, convolution and improbable acolytes to maintain a coherent plot in the four films after its chief villain died. Put another way, I'm never quite sure who did what to whom in the Saw films, but I can tell you exactly who's responsible for each and every death in The Collection despite its incoherence.

To his credit, Dunstan has matured as a filmmaker. The tension-and-mousetrap appeal of The Collector was soured by a few sequences of graphic on-screen torture that functioned as a cheap attempt to one-up Saw. This time around, such torture remains implicit and just out of frame, as evidenced by an early scene in which Elena peers through a hole in the trunk lid, the boundaries of which obscure unspecified horrors. The killer walks past with pruning shears, the victim screams and the killer returns with a severed tongue before he wheels the gurney away, but Dunstan's restraint (if it can be termed as such) remarks on the difference between an explicit spectacle of pain and the spectacle of our imagination, which provides the horror without the revulsion.

That's not to say The Collection isn't gory. After all, this is a film in which hundreds of nightclub patrons become fodder for a thresher, severed limbs serve as set decorations and arterial sprays paint geometric patterns on damn near every surface. But the traps are quick and effective compared to the slow, inevitable torture devices of Saw, and Dunstan rarely lingers on the violence.


The Collection wisely refuses to frame its villain as an antihero. Saw films repeatedly exposed their audiences to Jigsaw's twisted code, asking us to empathize with a cancer-stricken, eloquent engineer who just wanted to bring a little justice -- and a little joie de vivre -- to an amoral world, through the reforming, life-affirming magic of torture. Conversely, The Collection's killer is uncompromisingly awful while his victims remain sympathetic despite the functional dialogue and subpar acting endemic to films of this budget and caliber.

In making an entirely unnecessary sequel to a film that wasn't a hit the first time around, Melton and Dunstan have found a sphere of creative freedom because, really, nobody expects much from a film for which nobody asked. The result functions as an apology of sorts for The Collector's worst traits and Saw's slimeball past, a revisionist epilogue to a subgenre that's thankfully run its course, and a love letter to the kinds of films and movements rarely embraced by American mainstream critics.

Nonetheless, I'd be hard-pressed to recommend The Collection to anyone outside of its target demographic, which comprises exactly three groups: voyeuristic sadists, teenagers who have yet to develop concern for others and will see fucking anything on a Friday night, and die-hard horror buffs who are desensitized to violence but electrified by films that spider-walk a number of subgenres to comment on horror itself.

As The Collection played on, I felt my reticence gradually shift to a goofy fondness for their gonzo commitment to making a moral film that's bad in some ways and good in others, far from a masterpiece but further still from a failure -- God, at least it's never boring.

MINORITY REPORT: How dare you suggest that Saw is merely "decent"! The Saw franchise consists of one truly great film and six unworthy sequels. It's this generation's Hellraiser. - Ian "Professor Clumsy" Maddison