EXPECTATIONS: Ever since hanging up his cowboy hat and duster jacket, Clint Eastwood has carved out a nice little career for himself making one movie every year completely under the radar of mainstream everybody. This year's entry, Hereafter, promises an exploration of the world of psychics and the people that badger them to communicate with the dead. It may also double as an exploration of the world of people who badger Matt Damon. I'm okay with either outcome...

REALITY: ...Except that Hereafter is, in fact, neither of these things. Well, I mean, people do badger Matt Damon about contacting dead relatives, but those instances are few and far between. Hereafter more resembles a less-than-interesting episode of Six Feet Under, with three completely unrelated subplots that only barely tie together at the end. Depending on whom you ask, that pretty much describes every episode of Six Feet Under, but let's not go there.

Hereafter begins in Hawaii, where French news reporter Marie (Cecile de France) just narrowly escapes death in a devastating tsunami. Her near-death experience leads her to begin investigating the phenomenon, effectively alienating her from her job as a top political journalist. We then meet George Lonegan (Matt Damon), a retired medium trying to live a quiet life away from his notoriety as a psychic. He tries to become a real person again, working in a warehouse by day and taking cooking classes with Bryce Dallas Howard by night, but he can't escape being famous for talking to dead people. Finally, we meet Marcus, a young boy coping with the loss of a very close relative. The loss prompts Marcus to start researching the afterlife on Google, leading him to all sorts of wackos.

Okay, that's nice, it's good to know that this movie has characters and that they do things, but what is the film actually about? Technically, it's about the different ways in which people deal with grief and coming to terms with mortality. That's the broad stroke of what Eastwood and writer Peter Morgan are getting at here. If you asked me to explain it in any finer detail than that, I'm sorry, but that's just not possible. The script is a monotonous slog through the same emotional note over and over again, and Eastwood's direction has all the subtle complexity of a tack hammer on a trashcan. A better explanation would be to say that Hereafter is about testing the audience's patience. At which point will the viewer decide that life is too short to sit through boring stories about people grieving, and get up to go do something more productive? 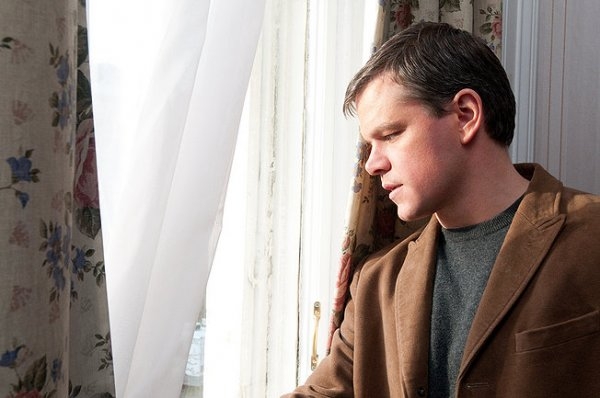 Matt, what are you looking at out there?

If you take away anything from this review, let it be this: The movie I just described is not at all the film that the trailers and television ads have been trying to sell you. They're trying to promote this movie as some kind of supernatural thriller, probably to squeeze out money from suckers looking for a classy alternative to Saw 12 or Paranormal2Activity or whatever other shitty horror movies are coming out in time for Halloween. Hereafter isn't that film; not in the least. Hereafter is the kind of weepy melodrama that grandma and grandpa will insist on watching on a rainy Sunday afternoon. Not to sound like a pompous little shit, but that's pretty much been Eastwood's audience for the past two decades. Proof: I was the youngest person in the theater by at least thirty years. On a Friday afternoon.

The closest Hereafter comes to even suggesting any kind of horror is the tsunami that opens the film. The sheer destruction on display here is impressive, especially for Eastwood. Roland Emmerich could have directed this scene while sitting on the toilet, but here it's just nice to know that Clint Eastwood still has a few tricks up his sleeve. Aside from that, though, the film is largely uneventful. There's a terrorist bombing in the film that Eastwood seems hell-bent on not letting us see. We hear an explosion and see smoke billowing out, but before you know it the event is over. And if you got up to go to the bathroom, you'd never have known it ever happened. 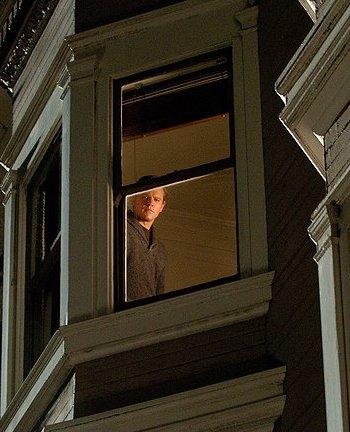 No, seriously; what the hell are you looking at out there?The other irritating thing about Hereafter, the one most likely to drive you as crazy as it did me: Over the course of about two hours, each of the film's three stories plays out almost entirely independent of the others. Every time story A settles into an interesting groove, the scene ends, and off we go back to stories B or C. It's as though Eastwood is intentionally trying to lull us into not caring about any of these subplots. George's story is genuinely interesting (he is the psychic, after all), and every time a new development occurs to bring us closer to George as a character, we're suddenly whisked away to the story about the boring reporter who wants to learn more about near-death experiences or the sad British kid getting hustled by douchebag cold-readers (on a sidenote, kudos to this movie for portraying cold-readers as being full of shit). While the film's three plots do eventually collide at the breakneck speed of six miles per hour, it never feels as though their dovetailing amounts to anything. Much like the characters in the film, you're left asking yourself, "What's the point?"

For what it's worth, Matt Damon is very good as George Lonegan. The little of his story that we actually get to see is well-told and almost justifies sitting through the rest of the film's nonsense. His scenes with Bryce Dallas Howard have that spark of two well-written characters playing off one another. Eastwood and Morgan seem to realize this as well, purposefully writing Howard's character out of the movie for being too interesting.

For a movie titled Hereafter and obsessed with the hereafter, we never get a very solid idea of what the hereafter is supposed to look like. During Marie's near-death experience, we get a brief glimpse of the afterlife. Shadowy figures standing around in a bright light is all we see, and it more resembles what Professor X sees in his Cerebro machine than any kind of afterlife I've ever heard of. But maybe we're not meant to get a good look at Eastwood's vision of the afterlife. Maybe he's hoping we'll die waiting for the movie to end so that he won't have to actually show us. Sorry, old man, you're not taking me down that easily.

MINORITY REPORT: I once had a near-death experience myself and paid a brief visit to the hereafter. There I met my mother and father who had been waiting for me. Well, bollocks to you, daddykins! I won't dance to your tune in this life or the next. -Montague "Legally Sane" Smythe