The Legend of Hercules

EXPECTATIONS: It just wouldn't be a new year at the movies without two different studios making films about the exact same thing. The Legend of Hercules entered production last year right around the time Dwayne Johnson and Brett Ratner began shooting their own version of the Hercules myth. It's difficult to say who had the idea first, but considering the talent involved, I'm willing to bet this one is the half-formed doppelgänger.

REALITY: How does something like this even happen? The legend of Hercules, ancient Greece's greatest champion, is one of brute strength overcoming insurmountable odds. It's about a man claiming his birthright alongside the gods of Olympus. What director Renny Harlin and his three (!) co-writers have turned that story into is a dumb-as-a-post superhero origin story that strips away most of the myth's supernatural elements and replaces it with boilerplate garbage masquerading as family melodrama.

Are you not entertained? No? Me neither.


In the days of ancient Greece, King Amphitryon (Scott Adkins) made a name for himself by conquering his neighbors and generally being a self-important dick about it. His wife, Alcmene (Roxanne McKee), prays to the gods that they might deliver her people from his tyranny. The goddess Hera grants her wish, allowing Zeus to give Alcmene a son. Amphitryon names him Alcides, but you and I and everyone else in the movie know his real name. It's Hercules, and if you can't remember it, don't worry, because someone will come along every five minutes or so to remind you what his name is.

Twenty years later, that son (Kellan Lutz) and his brother Iphicles (Liam Garrigan) vie for the affections of Hebe (Gaia Weiss), the princess of Crete. When their father proclaims Iphicles the future king, and Hebe his future wife, he sends Hercules on a military campaign in Egypt. There, Hercules is captured and sold into slavery as a gladiator. After he makes a name for himself killing everything with two legs and a face, Hercules brawls his way back to his homeland to depose the king, rescue Hebe, and claim his birthright as the son of Zeus.

That sounds a lot like the Hercules stories you heard growing up, doesn't it? Mostly the part about being born to those parents, having that brother and being a stone cold badass on the battlefield. Everything else sounds made up by producers who think people won't sit still for ninety-nine minutes of Hercules slaying hydras, capturing three-headed dogs and sweeping massive amounts of horse shit. (Psst: We will.)

What we have, then, is only the most generic sword & sandal epic known to man. Throw in a little bit of Robin Hood-esque romanticism, an unnecessary appropriation of Christian symbolism, and some ultra-weak special effects that look like drawings Ray Harryhausen put on his refrigerator to show how proud he is of his grandkids, and you have a basic idea of the tone and style of The Legend of Hercules. 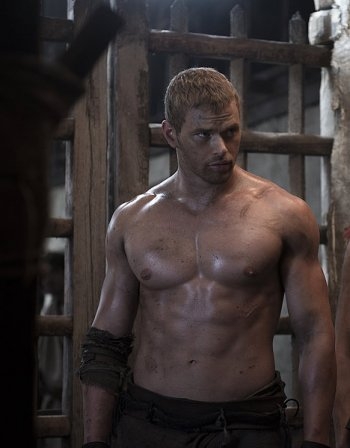 They were renowned for their smooth, hairless bodies in ancient Greece.The film apparently enrolled in the Zack Snyder school of filmmaking, but dropped out halfway through Speed-Ramping 101. Hercules utilizes speed-ramping, slowing down an action beat for dramatic effect and then speeding it back up, like it's going out of style. It's just that Harlin doesn't seem to know when to use it or how to lend those shots any kind of weight. For starters, it's really only necessary when you want the viewer to feel the impact of a hit. When Hercules slams two guards with a boulder on a chain, it works. But when Hercules takes a punch and falls backwards over a table? Not so much, unless you want to bask in the glory of your hero taking a pratfall onto a fruit basket.

It doesn't help that Kellan Lutz is about as charismatic as an unfinished statue. He has the physique of a young, relatively underdeveloped Hercules, sure, but it's impossible to buy any of the lines he struggles to spit out. That goes for most of the cast, actually. The entire film is in English, but the dialogue is impenetrably stilted, forced into a phony sort of faux-Shakespearean babble. It's like someone translated the Lorem Ipsum placeholder text and pasted all of it into Final Draft.

What's even more appalling is that this whole endeavor somehow cost $70 million. For reference, that's $20 million more than Anchorman 2, a film featuring every comedian in Hollywood and Harrison Ford. And speaking of Ford, here's another figure to wrap your brain around: The Legend of Hercules cost more money to make than The Empire Strikes Back (even adjusted for inflation). Yet somehow, against any sane measure of logic, this film looks like it was shot in Renny Harlin's backyard over a long weekend.

Where did all of that money go? Surely Kellan Lutz isn't that big of a draw. Maybe this was intended to be another Hercules TV series and the pilot was the only usable episode. Or maybe they blew ninety percent of the budget on 3D effects, though that's a lot of money to waste on 3D rose petals. I suspect this picture was the pack mule for some shady Hollywood accounting. You can't just dump that much money into a film and not have anything to show for it.

I would say The Legend of Hercules is bad enough to kill the sword & sandal genre dead in its tracks, but that doesn't account for the fact that there are at least five other films like this headed our way in 2014. Batten down the hatches, folks. It's going to be a rough year.

Now, this film's not really aimed at me. - Montague "Legally Sane" Smythe