EXPECTATIONS: Sylvester Stallone needs to quit reminding us how old he is. We know. We knew before you did. And now he's taking Robert "Look at me, it's funny because I'm doing a thing you didn't think Robert De Niro would do!" De Niro on the trip down memory lane with him. See, see, the joke is that both of these guys played boxers in the seventies. Just making sure we're all clear on that. Except comparing Rocky to Raging Bull seems like a drastic oversimplification of both films, but hey. No one is accusing Peter Segal, director of Nutty Professor II and Anger Management, of putting a whole lot of thought behind his directorial choices.

REALITY: Look, if you have a scene in your screenplay where a funny moment "goes viral" and "got millions of YouTube hits in one day!", then you are an idiot. But if you do it three friggin times, then you're just being lazy. You're also inadvertently admitting that you are unable to make up reasons anyone should actually care about your characters, and I don't see how you don't understand that. Oh, and if you can top it off with plenty of "Old man doesn't understand new thing" jokes, well that's just perfect, you massive hack. 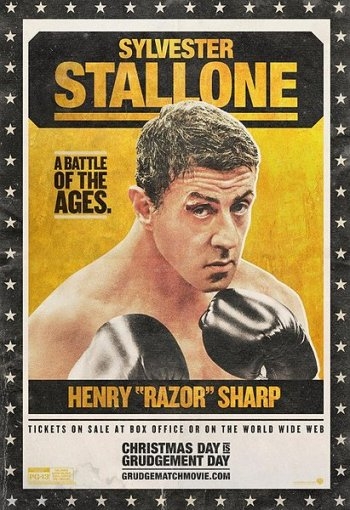 "...of the ages." Get it? Because they're old.This is how we arrive at the situation presented in Grudge Match. Retired boxers Billy "The Kid" McDonnen (De Niro) and Henry "Razor" Sharpe (Stallone) reunite an old rivalry after thirty years when they are accidentally forced together by wannabe show promoter Dante Slate, Jr. (Kevin Hart, who will apparently be in one movie per month until 2029.) Both men have only one loss on their records - to each other, naturally, and a long-awaited tiebreaker match brings up all of their history and bitterly accepted respect for each other.

Well, when I put it that way, that actually sounds pretty good, right? It's like Warrior but through a filter of Grumpy Old Men. The truth is, once the movie becomes about that, then yes, it actually is good. The movie may only have one "bit", Balboa vs. LaMotta, but it is committed to that. Personality-wise, De Niro and Stallone are basically revisiting their old characters, and the update feels faithful and accurate. Kid is loud-mouthed and bitter, holding on to years-old grudges and victories, while Razor is introverted and cautious, perfectly content to live a quiet life in & Pittsburgh? Pittsburgh? Stallone, you sonofabitch, Philadelphia gave you a statue, and you go and make a boxing movie in Pittsburgh?

That aside, the further we go into these character's backstory, the better it gets, with a few exceptions. We learn the reason for Razor's reclusion and early retirement from boxing stems from his heartbreak when Kid slept with and impregnated his girlfriend Sally (Kim Basinger), resulting in a now-grown son, B.J. (Jon Bernthal), who becomes Kid's trainer after the two are reunited, to give Kid some sort of redemption arc. All of this is actually pretty decently handled, and interesting to watch. However, it's also slightly ruined by one of the most obnoxious inclusions of a "cute little kid" I've seen in years. Why is it that everyone writing kids' parts in movies seems to have no idea what a kid sounds like? It's not hard, AT&T has been doing it in commercials for at least a year. But in Grudge Match, we're subjected to funny-pages humor throughout, and you can't help but feel that we should be past this.

This is Grudge Match in a nutshell. When it sticks to its core concept, it's actually a strong, interesting, and fun movie. The final fight scene ties up all of these ends well, and leaves us with an entertaining and satisfying conclusion. But when the film drifts from that, relying on lazy cliches, overdone jokes, and ham-fisted references, all the good stuff is eventually drowned under constant jokes about Robert De Niro's weight. (This is also a Raging Bull reference, overdone to the point where it is no longer recognizable as such.) It's a massive waste of potential that not even Kevin Hart's constant yelling can save us from.

MINORITY REPORT: Everything about this movie sounds like it was written to sidestep as many copyright infringement claims as possible. Hell, the video game angle that kicks off the story is literally a plot device stolen from the last Rocky film. - Joseph "Jay Dub" Wade