Hobo with a Shotgun

EXPECTATIONS: Back when Robert Rodriguez and Quentin Tarantino foisted Grindhouse upon us, they held a contest wherein fans made their own trailers for fake grindhouse movies. The winner was Jason Eisener's Hobo with a Shotgun. Four years later, the feature-length version is here, promising to crawl under our skin the way only the worst exploitation films truly can. With Rutger Hauer headlining such an oddball production, I'm expecting to be thoroughly entertained and creeped right the fuck out. Also, call me crazy, but I half expect to see a homeless person wield a shotgun.

REALITY: I gotta hand it to 'em, if Eisener and Co. set out to make the most manic, perverse piece of trash cinema humanly possible, they succeeded in spades. Hobo with a Shotgun isn't merely another Grindhouse-style parody of '80s exploitation films. It revels in its own awfulness in a way that makes me realize just how much Planet Terror, Death Proof and even last year's Machete were all simply goofing around. I'm not going to sit here with a straight face and tell you that Hobo is the "real deal" or anything like that, but it is a far better execution of the genre than I think anyone was expecting. 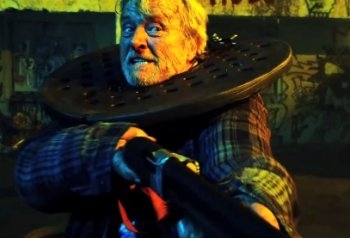 As fashion statements go, this one has quite a lot to say.The story, such as it is, begins as we meet the titular Hobo (Rutger Hauer) riding into town on a railcar. He quickly discovers that this particular town is run by scumbag crime boss Drake (Brian Downey) and his psychotic teenage kids Slick and Ivan (Gregory Smith, Nick Bateman). After rescuing a prostitute named Abbie (Molly Dunsworth) from Slick, the hobo takes it upon himself to take back the town from filth like Drake. One by one degenerates, deviants, slimeballs and other synonyms meet their fates at the business end of the hobo's shotgun, prompting Slick and Ivan to declare war on the homeless. What follows is a violent game of one-upmanship.

Hobo with a Shotgun is sort of what it would look like if Frank Miller's version of Batman stumbled out of a Sergio Leone western, wandered into VH1 headquarters and started punching everyone responsible for I Love the '80s. For every scene set in a washed-out, darkly lit back alley, there's a neon-infested 1980s stereotype waiting around the next corner. Most scenes are punctuated with John Carpenter-esque synthesizers, and people throw around cocaine like, well, candy. I can't say exactly how much of the film's aesthetic is ripped straight from a retro catalog and how much is simply a product of it being filmed in Canada. At any rate, the film wears its worn-out, grotesque '80s-ness like a badge of honor, and then beats you to death with it.

Most of the fun in this film comes not from the violent acts themselves, but from the perverse sense of glee with which the characters commit them. Despite being thoroughly hateful, rotten characters, Slick and Ivan are two of the most fun villains this side of Heath Ledger's take on The Joker. These guys are decked out in matching black and white outfits, Ray-Ban sunglasses and shit-eating grins. It's disturbing seeing Slick take a flamethrower to a bunch of innocent people, but Smith's performance is like watching Darth Vader strangle yet another officer. He's killing people right in front of our eyes, but you can tell he's having a fucking ball doing it. 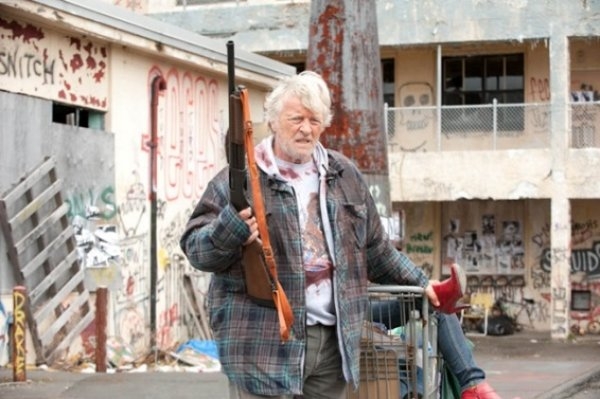 The Hobo, looking for a change of scenery, decides to visit Manchester.

Hobo with a Shotgun seems to exist on the same plane of reality as vague sci-fi dystopias such as Robocop or The Running Man. Anarchy is the buzzword here, with our hero acting as the lone voice of sense and reason in a world gone absolutely bugfuck crazy. Sure, the hobo may be a little crazy himself, but that doesn't stop him from knowing right from wrong, decency from sociopathy. We root for the hobo not because he's the champion of the lower class, but rather because he's the only person in the film with any sort of moral compass. (Also, he's Rutger Hauer. How do you root against Rutger Hauer?)

In fact, one reason the film works as well as it does is because it doesn't pretend to be something it's not. If there's one thing that Hobo isn't, it's a high-minded exploration of class warfare. That's just not Eisener's game here. Robert Rodriguez used Machete as a clunky mouthpiece to air his grievances with America's illegal immigration issue, and kind of wound up gimping the parody in service of a message nobody cared about. Here, there's no such soapbox moment. There's really no opportunity for the hobo to stand up and makes a big Suessian "I speak for the panhandlers" statement, because the film is far too busy adding bodies to the pile.

That's kind of refreshing, really. Too many movies these days feel the need to 'say' something. Is Mars Needs Moms' anti-gay agenda really what we need right now? Was anybody interested in Sucker Punch's critique of the male gaze? Do we care what Source Code has to say about counter-terrorism? (Actually, yes to that one.) The point is: It's perfectly okay to enjoy a low-budget, low-brow splatterfest, and right now is the time for Hobo with a Shotgun.

The production as a whole, gory and despicable as it might be, is a thoroughly impressive one. At times it gets bogged down in its own low-budgetness, but for every piece of character development that falls flat, there's another villain waiting in the wings to make us giggle with insane delight. Rutger Hauer looks like he's having fun wallowing in Eisener's madness, but the real stars of this show are the villains. If the third-act appearance of two characters known only as The Plague doesn't get you excited for the finale, then I think it might be time to pack it in and admit that this kind of movie just isn't for you.