EXPECTATIONS: I realize this goes against everything we hold dear around these parts, but God help me, do I ever have a soft spot for Robert Pattinson. I think it's the disdain that he has for the franchise that made him famous. Nobody hates Twilight more than Robert Pattinson, who once made friend and Harry Potter co-star Rupert Grint read the whole series because Grint lost a bet. As a result of this, I'm more willing to show more mercy on old R-Patz than most denizens of the internet are, and I'm waiting to see what he can do with a non-sparkly role. (And, no, I don't count Remember Me, also known as "that movie that ends with 9/11 out of nowhere.")

REALITY: I'm beginning to think Christoph Waltz might actually be the devil himself. Or at the very least, a high-ranking minion. I'm also beginning to think that if this is true, he could walk into the Current Releases offices right now and offer to buy me a beer in exchange for my soul, and I would probably do it. It wouldn't even have to be good beer. Pabst Blue Ribbon would do fine. 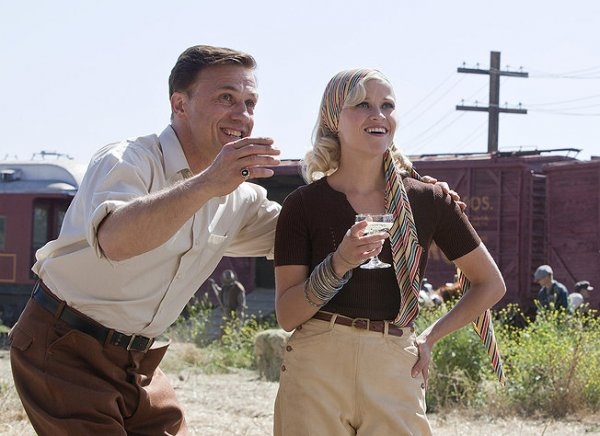 Behold! Something just off screen to the... no, wait. I've done that joke.

It's hard to articulate just how good Waltz is at playing the bad guy. He can go from sadistic to pathetic at the drop of a hat. He can somehow be a villain we have sympathy for without being a "sympathetic villain." He can stab at a four-ton elephant with a fire poker and have it somehow not look ridiculous. This is the mark of a true movie villain. As cool as he was, Hans Gruber never stabbed an elephant. For those keeping track at home, this makes the score Christoph Waltz-1, Alan Rickman-0.

Water for Elephants tells the story of young veterinary student Jacob Jankowski (Pattinson), who accidentally jumps a circus train while wandering the countryside following his parents' death during the Great Depression. Some of the carnies put him to work, and he eventually wins the favor of the ringleader August (Waltz). He also wins the attention of the show's star performer Marlena (Reese Witherspoon), who happens to be August's wife. So, now we have our cast, and our settings, and our drama... oh, also at some point in the story, August buys and puts Jacob in charge of an elephant named Rosie (An Elephant). 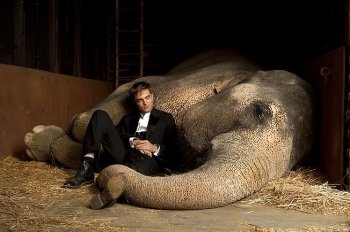 You forgot to water the elephant again and now it's dead.Why don't characters in movies ever say the things that could help them out the most until the very last moment? You would think that, upon wandering into the circus, Jacob would say "Oh, I noticed you have a lot of animals, I happen to be a veterinarian. Perhaps I could be of service?" But no. It has to be literally forced out of him under threat of being thrown from a moving train. It's supposedly there to add dramatic tension, but it just feels unnecessary. This can be said of a lot of the film actually. Although most of the time the film is compelling and engaging, toward the middle, when the relationship between Jacob and Marlena heats up, it dips into silly melodrama, and only Waltz's sadistically smiling face can save it from being utterly ridiculous.

I enjoyed Water for Elephants despite these few faults, because the things it has going for it far outweigh those issues. James Newton Howard's score is outstanding, and the script, adapted from the novel by Sarah Gruen, is fun and witty. There are moments when the tension drags, and plenty of occasions that seem like they may have worked better in text than on screen. This includes the film's sudden climax, which is as unexpected, awesome and insane as the shark bite scene from last week's Soul Surfer.

The real question here is: What about Pattinson? Well, there's not much to say. He's good, but not outstanding. His chemistry with Witherspoon never seems forced, but it never really comes across as genuine, either. (By the way, it is never mentioned that this movie is actually about a woman caught between a man 15 years too young for her, a man 15 years too old for her, and an elephant.) Basically, sending Pattinson to hold his own against Waltz's madcap scenery-chewing is like sending a donkey to face a Clydesdale. I don't even know what the competition is, but I'll tell you that donkey ain't winning.

Pattinson shows potential to be a great actor eventually, but for right now, he's almost more of a prop. Of course, everything is relative. I'm not really sure I can fault the man for a lack of screen presence when he's standing next to a freaking elephant. Maybe he'll get another chance in the upcoming sequel, Birdseed for Chickens.

MINORITY REPORT: Not everyone agrees with you about Mr. Pattinson. - Ian "ProfessorClumsy" Maddison