EXPECTATIONS: Back in the days when Rowan Atkinson was a hot item, he used to appear in television commercials for some bank or other as this inept spy character called Johnny English. Then, some time later, it was decided that there should be a feature-film vehicle for this character. This was all quite a long time ago, mind you; even longer ago than the last James Bond film. It's safe to say that we live in a time where spy parodies are not exactly relevant, let alone ones starring comedians who haven't been big since the '90s as characters who have never been particularly beloved outside of bank adverts. 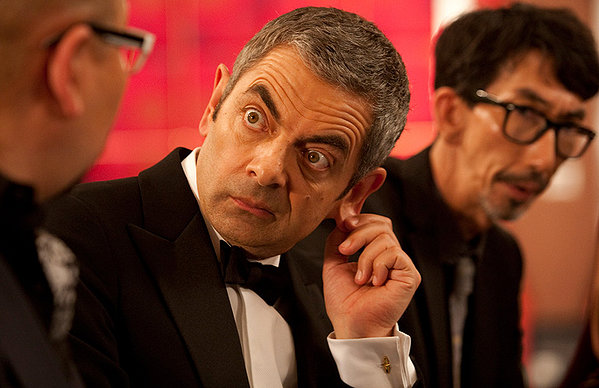 So suave and yet so clumsy.

REALITY: Johnny English Reborn left me with some mixed feelings. While it is incredibly outdated, both in its subject matter and in a great deal of its jokes, there are a handful of sequences that are genuinely hilarious and original. Director Oliver Parker displays an impressive knack for visual comedy and action, which is ably helped by Rowan Atkinson's blend of suaveness and clumsiness.

Five years after his dismissal from MI7, Johnny English (Atkinson) is called back into action to track down the members of a mysterious group of assassins known as Vortex. He is helped along the way by therapist Kate Sumner (Rosamund Pike), his partner Tucker (Daniel Kaluuya), fellow agent Simon Ambrose (Dominic West) and his boss Pegasus (Gillian Anderson), as the plot takes many twists and turns and leads back in disappointingly predictable directions. 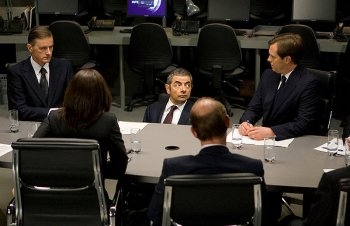 Chair-based comedy: the Ace up this film's sleeve.I don't think anybody was really expecting this film to be a masterpiece by any stretch of the imagination. Even the most diehard of Rowan Atkinson fans would probably agree his best days are long behind him. And watching this film's early scenes will give you an eery sense of familiar, stale comedy. Stay with it, though, and you will find Johnny English Reborn to be quite a rewarding experience, because its clever slapstick-action set pieces really do bring out some big laughs.

My own opinion on the film completely reversed during a mock parkour chase, in which Johnny finds amusing ways to stroll toward his fleeing target in a manner that can only be described as perfectly British. It's in these scenes that we see the aforementioned blend of suaveness and clumsiness that is quite characteristic of your average Brit and is the very heart of the Johnny English character.

As great as all that visual stuff is, it's surrounded by a rather dull film. Anything that doesn't involve chasing or escaping or flying a helicopter round a roundabout is just a by-the-numbers spy caper with a tacked-on romance that doesn't work and characters who are hard to care about. Sometimes it feels like the filmmakers weren't sure if they should be making a family comedy or a serious action thriller, and that leads to an odd discrepancy in tone. There's a startling amount of violence peppered throughout, which doesn't play well to the younger crowd they obviously hoped to get. I don't mean younger like hip twenty-somethings here; I mean kids who might have trouble watching people get gunned down when they were expecting a laugh-a-minute romp.

I feel conflicted because at its best Johnny English Reborn is brilliant, but at its worst it is outdated, irrelevant and dull. In truth, anything that comes close to comedic brilliance, especially given the poor showing of comedies we've had over the summer, has to be something I would recommend. The laughs, when they come, are boisterous and memorable. I'd even say they're well worth pacing through the sea of old jokes and uninspired writing to get to.

MINORITY REPORT: The last time I saw that cunt Rowan Atkinson, it was during a rerun of Mr. Bean on American TV, in which he used his city's power infrastructure to resuscitate a man whose heart hadn't actually stopped. Now that's hilarious. Johnny English Reborn, on the other hand... not so much. The comedic savvy of the OSS 117 series, Leslie Nielsen's Spy Hard and James Bond himself kind of crowds out the competition in the spy-parody genre, and poor Mr. Atkinson can barely get his suave yet clumsy foot in the door. - Sean "Keanu Grieves" Hanson